In the first part of this article, Dave Griffin and 14 other bike fanatics embarked on a dream tour to Austria, to visit a KTM factory and the famed Red Bull Hanger 7. Next up was the Erzberg Rodeo, a two-hour drive from their home base at Schladming.

Knowing where the Erzberg race is (in a huge mine dump) and having being warned of the weather (absolutely wet), we went in search of gumboots to waddle around in the sea of mud that was waiting for us (and the competitors) at Erzberg. Searching for gumboots in Austria is not a problem, but having feet the size of a valve cap is. So finding gumboots for some guys in the group was a bit harder than usual. We eventually had to go to a female shoe store and get a pair of female-sized gumboots for two guys, much to the humour of the group.

With our shopping completed and no restaurants in sight, we found a small grocery store that was closing for the night, but after hearing that a couple of tourists were hungry, they kindly offered to make us 15 sandwiches. It was absolutely awesome service from an absolutely awesome country! Refuelled, some of us went in search of a good time, finding that good time at a bar called ‘The Mexican’. We learnt that they were hosting a bachelor party, which we duly crashed, much to the delight of the host. Very friendly people the Austrians, and they sure know how to party.

The following day, we drove the two-hour trip to Erzberg and found ourselves completely lost riding up a mountain pass blanketed in enough snow to sponsor an Ice Age. With two people carriers full of guys and kit, an extremely slippery road, and a sense of direction that would make a blonde blush, we pulled over to get our bearings. Once we knew where we were, and noticing that we were knee high in snow, a mature test of manliness ensued and we had a snowball fight, which brought out the inner child within each of us! Then we jumped back into the vans and headed to Erzberg.

The next two days at the Erzberg Rodeo had all of us in awe. Erzberg is essentially 500 hundred riders racing from A to B in a large mine dump, with some forest and rock riding thrown in. Easier said than done because only 14 of the 500 riders finished. From the helicopter, the course resembled an ancient battlefield, scattered trenches, mud and stone dugouts, and hundreds of little soldiers streaming about. It was insane. As a road racer, I was blown away at what these guys can achieve with their bikes. This is enduro riding at its most brutal; riders flipping their bikes while trying to get an uphill climb is not uncommon, but when that flipped bike comes hurtling down onto riders below him, this is where the race separates the men from the boys. With washouts around every turn and a couple of flooded carbs later, they eventually finished the race. With so much happening, it was almost overwhelming to try and take it all in. With Erzberg still lighting up our veins, we flew to the Isle of Man, to support fellow South African and good friend AJ Venter, who was competing in the Isle of Man, the mother of all time trials.

The Isle of Man is an island in-between the British mainland and Ireland, and controlled by an individual government. It has a 60 km route on the island that is used for the Isle of Man Tourist Trophy (TT). The TT was first formed just after the turn of the century, due to the speed limit of 20 mph (32 k/h) cast on the British mainland. Essentially, a group of speed freaks didn’t want to be limited to a speed limit and headed to Mann (another name for the island) to experience their speed beasts at their full potential. The first official Isle of Man event occurred in 1907, with the average speed of 62 kph, a far cry from today’s ridiculous speeds.

Arriving safely in Mann, we were greeted by the most phenomenal weather; blue skies and sunny, although not warm it was an improvement over Austria and the rain! Quickly learning that public transport was a myth, we engaged two taxis and headed off to meet Clinton Pienaar and his tour in Crosby, situated inland and on the TT course. We were looking forward to watching some racing. Our first evening was spent enjoying the local restaurants and bars, and being blown away by the amount of motorbikes and countless number of people that had invaded the island.

We walked through the pits and although temporary, they were remarkably professional. Most were fully floored and completely kitted out with every conceivable tool, along with seating areas for the crew and sleeping accommodation. Somewhat green with envy, I was making notes of what was lacking in our race set-up!

Some of the most interesting bikes to see were the electric bikes built in a 600 cc frame and with enough energy to do a single flying lap. The construction is space aged and I can see some extensive R&D being done with these, potentially bringing new and better engineering. Not just design, but a new product that is lighter and stronger, and which definitely aids greater acceleration and speed.

The retail side of the pits is almost like a festival in appearance. There was a large retail tent selling official clothing and apparel, food stalls filling up the air with a myriad of hunger-provoking smells, beer tents alive with people, and seated areas packed with people talking about the day’s events and soaking up the sun.

The organisers really put on a great show. They had street drag racing, the purple helmet stunt riders, and the Red Arrows acrobatic display was incredible, not to mention the beach MX racing. The TT came alive with everything a motor head would be engrossed in. We were very fortunate to complete a lap of the course under the commentary of AJ Venter. He took us through each bend, bump, brake marker, and blind rise, detailing exactly what was going through his mind at each section of the course. This was really insightful and made us feel part of the race. Our bus driver, on the other hand, must have thought we were all seriously touched!

On race day, we were limited by choice, so we chose Crosby Hill as a viewpoint to watch the racing. This was mainly due to being close to our house, but it was also one particular place where the racers would be flat out, full twist, and in top gear for 6 km. At our specific point, there was a little ramp that if crossed at the wrong place would cause the bike to wheelie for about 80 m, at 200 plus km/h! Spectacular!

Understanding the room for error and amazing ability to lock out all distractions, while creating a tunnel vision that only sees brake markers, entry points, apex and exit line, all at over 200 km/h, the TT for me was almost surreal.

Our last night was spent in Douglas enjoying the scenery and walking from pub to pub in search of local cuisine. We ended up walking the entire length of the bay (it felt like 4 km) until we reached the tram station and a really interesting Chinese restaurant, where we settled in for a truly remarkable dinner.

The following morning, we begrudgingly dragged ourselves to the airport where the group melted together again and set off for Frankfurt. Luckily, Shmeegal’s phones were waiting for us at Customer Services, but retrieving them was another issue as our visas were single-entry only. This took some serious negotiations and eventually we were escorted under armed guard to collect them. Our flight home was rather subdued. Nonetheless, we found solace in reminiscing over our tour and future plans were steadily taking form.

I guess, in conclusion, this was a once-in-a-lifetime highlight that saw the realisation of many a dream, a fantasy come true, a boys’ tour to the birth place of our beloved KTMs, a walk through racing and extreme sports hall of fame, and watching two of the world’s most extreme races in awe. Yes, indeed, this will be one story that grandchildren and great-grandchildren will talk about for generations to come, not only for the places, but the people as each member brought that special ingredient that made it so memorable.

My thanks to Teresa for her hard work and careful planning, and each member of our tour for making it a phenomenal trip! There will be more and I expect each will have a heart and soul of its own, I can’t wait! 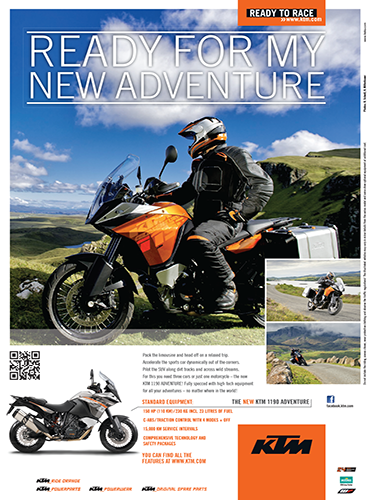