If you love Jeffrey Archer, then feast your eyes on this fantastic selection of Jeffrey Archer books, available from Pan Macmillan. 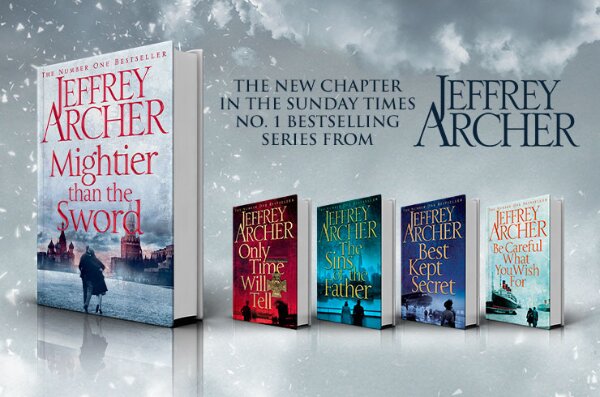 Mightier than the Sword

Mightier than the Sword is the fifth and latest novel in the epic Clifton Chronicles series, and opens with an IRA bomb exploding during the MV Buckingham's maiden voyage across the Atlantic - but how many passengers lose their lives?

When Harry Clifton visits his publisher in New York, he learns that he has been elected as the new president of English PEN, and immediately launches a campaign for the release of a fellow author, Anatoly Babakov, who's imprisoned in Siberia. Babakov's crime? Writing a book called Uncle Joe, a devastating insight into what it was like to work for Stalin. So determined is Harry to see Babakov released and the book published, that he puts his own life in danger.

His wife Emma, chairman of Barrington Shipping, is facing the repercussions of the IRA attack on the Buckingham. Some board members feel she should resign, and Lady Virginia Fenwick will stop at nothing to cause Emma's downfall. Sir Giles Barrington is now a minister of the Crown, and looks set for even higher office, until an official trip to Berlin does not end as a diplomatic success. Once again, Giles's political career is thrown off balance by none other than his old adversary, Major Alex Fisher, who once again stands against him at the election. But who wins this time?

To purchase this book, visit: http://panmacmillan.co.za/catalogue/mightier-than-the-sword/

Book 1: Only Time Will Tell

The epic tale of Harry Clifton’s life begins in 1919, in the backstreets of Bristol. His father was a war hero, but it will be twenty-one tumultuous years before Harry discovers the truth about how his father really died and if, in fact, he even was his father. Only Time Will Tell takes a cast of memorable characters from the ravages of the Great War to the outbreak of the Second World War, when Harry must decide whether to take his place at Oxford, or join the fight against Hitler’s Germany.

In Jeffrey Archer’s masterful hands, you will be taken on a journey that you won’t want to end, even after you turn the last page of this unforgettable yarn, because you will be faced with a dilemma that neither you, nor Harry Clifton could ever have anticipated.

To purchase this book, visit: http://panmacmillan.co.za/catalogue/only-time-will-tell/

Book 2: The Sins of the Father

New York, 1939. Tom Bradshaw is arrested for first degree murder. He stands accused of killing his brother. When Sefton Jelks, a top Manhattan lawyer, offers his services for nothing, penniless Tom has little choice but to accept his assurance of a lighter sentence. After Tom is tried, found guilty and sentenced, Jelks disappears, and the only way for him to prove his innocence would be to reveal his true identity - something that he has sworn never to do to protect the woman he loves.

Meanwhile, the young woman in question travels to New York, leaving their son behind in England, having decided she'll do whatever it takes to find the man she was to marry - unwilling to believe that he died at sea. The only proof she has is a letter. A letter that has remained unopened on a mantelpiece in Bristol for over a year. Archer continues the saga of The Clifton Chronicles with this epic novel, The Sins of the Father. Family loyalties are stretched to their limits as secrets unravel, and the story moves from the backstreets of Bristol to the boardrooms of Manhattan.

To purchase this book, visit: http://panmacmillan.co.za/catalogue/sins-of-the-father-paperback/

1945. The vote in the House of Lords as to who should inherit the Barrington family fortune has ended in a tie. The Lord Chancellor's deciding vote will cast a long shadow on the lives of Harry Clifton and Giles Barrington.

Harry returns to America to promote his latest novel, while his beloved Emma goes in search of the little girl who was found abandoned in her father's office on the night he was killed. When the General Election is called, Giles Barrington has to defend his seat in the House of Commons and is horrified to discover who the Conservatives select to stand against him. But it is Sebastian Clifton, Harry and Emma's son, who ultimately influences his uncle's fate.

In 1957, Sebastian wins a scholarship to Cambridge, and a new generation of the Clifton family march onto the page. After Sebastian is expelled from school, he unwittingly becomes caught up in an international art fraud involving a Rodin statue that is worth far more than the sum it raises at auction. Does he become a millionaire? Does he go to Cambridge? Is his life in danger?

To purchase this book, visit: http://panmacmillan.co.za/catalogue/best-kept-secret/

Book 4: Be Careful what you Wish for

Be Careful What You Wish For, the fourth instalment in Jeffrey Archer'sThe Clifton Chronicles, opens with Harry Clifton and his wife Emma rushing to hospital to learn the fate of their son Sebastian, who has been involved in a fatal car accident. But who died, Sebastian or his best friend Bruno?

When Ross Buchanan is forced to resign as chairman of the Barrington Shipping Company, Emma Clifton wants to replace him. But Don Pedro Martinez intends to install his puppet, the egregious Major Alex Fisher, in order to destroy the Barrington family firm just as the company plans to build its new luxury liner, the MV Buckingham. Back in London, Harry and Emma's adopted daughter wins a scholarship to the Slade Academy of Art where she falls in love with a fellow student, Clive Bingham, who asks her to marry him. Both families are delighted until Priscilla Bingham, Jessica's future mother-in-law, has a visit from an old friend, Lady Virginia Fenwick, who drops her particular brand of poison into the wedding chalice.

Then, without warning, Cedric Hardcastle, a bluff Yorkshireman who no one has come across before, takes his place on the board of Barringtons. This causes an upheaval that none of them could have anticipated, and will change the lives of every member of the Clifton and Barrington families. Hardcastle's first decision is who to support to become the next chairman of the board: Emma Clifton or Major Alex Fisher? And with that decision, the story takes yet another twist that will keep you on the edge of your seat.

To purchase this book, visit: http://panmacmillan.co.za/catalogue/becareful-what-you-wish-for/

Email your answer to . The competition closes at midnight on Thursday, 26 March 2015 and the winners will be drawn from all the correct entries received. Only one entry per person. DO IT NOW's competition rules apply. Mightier than the Sword