Beyond the rolling hills - fulfilling a boyhood dream

When I was a young boy, I would often lie on my bed and stare out at the rolling hills, wondering what lay beyond them. They seemed to be a barrier beyond which unknown adventures lay. I was convinced that all I needed was a means to get past them and then the freedom of adventure would begin.

The means finally arrived in the form of an old 1980s scrambler, and the opportunity in the form of a friend inviting me on a seemingly insignificant trip from Hilton to the top of Sani Pass. For me it was the fulfilment of a boyhood dream. I say insignificant trip because there isn’t any massive difficulty in completing such a journey, however for me it was the opportunity to finally go beyond those rolling hills.

We left for Sani Pass following in the tracks of Godfrey Edmonds, an ex Spitfire pilot, who managed to coax the first vehicle, an old war-surplus Jeep, up the then bridle path, to the top of the pass in 1948. The path was eventually converted into a road by David Alexander and friends in 1955, to create a trade route between Himeville and Mokhotlong. To this day, it remains the only access to the Lesotho Highlands from Natal.

Now, I must mention that our trip was not quite as simple as it would first appear, but had a number of constraints that helped add to the adventure of it all. First, we had two old, unreliable, and unlicensed scramblers, which meant public road riding would be limited. Second, we had very little in terms of maps (our only aim being to get beyond those rolling hills), so from early on it was a case of following what we thought was the general direction. Finally, to top it all off, two days before we left, the Midlands was hit by a late season cold front that turned everything magnificently white.

Undeterred, we set off, bikes crudely packed with tents, backpacks, and sleeping mats; the open road and prospect of new adventures ahead beckoning. I am a firm believer that the motorbike is the modern-day equivalent of the horse, and that the feeling of riding out into the open would have been the same feeling early explorers or cowboys experienced as they set out west, in search of new lands and foreign places.

We soon reached the top of those rolling hills, where we were presented with yet another set of rolling hills. Nevertheless, instead of discouraging us, they served only to further ignite the spirit of adventure. 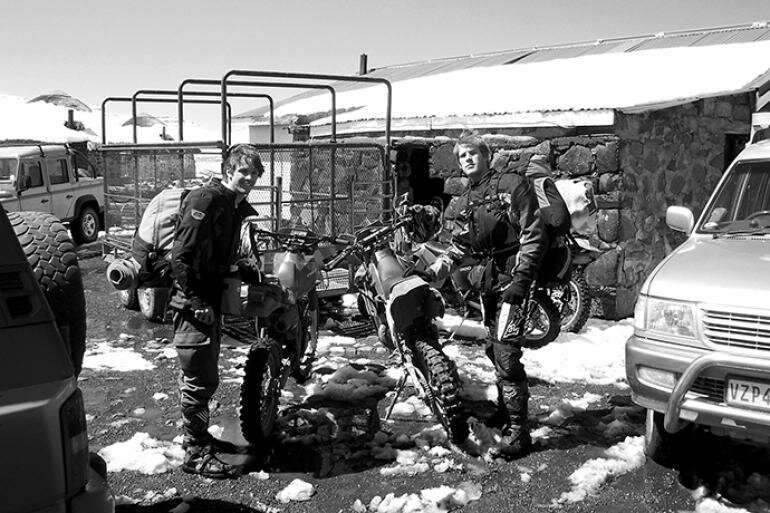 We could now start to make out the shape of our ultimate goal; the mighty Drakensberg Mountains rising proudly above the horizon and completely covered in a white blanket of thick snow. Continuing along winding district roads, we were struck by a sensory overload in the form of magnificent views and the changing smells of the cool, crisp air as we passed through different landscapes. The remainder of the day’s riding was fairly uneventful, bar one goat that correctly established it was not a sheep and therefore would not follow the rest of its family across the road. Instead, the goat sought out my front tyre as refuge. After a lot of wobbling and some divine intervention, I somehow managed to stay upright as I swerved around the goat, which sheepishly ran off after its family.

After a comfortable night spent on the floor of an old Himeville farmhouse, we packed up and hit the road once more with the prospect of making our way up the twisty switchbacks that make up the famous Sani Pass. Our progress was promptly halted when we reached the border post, where the border guard was quick to point out that unlicensed bikes were no longer allowed up the pass and we would have to turn around! We, however, were not giving up that easily and after much waiting around, we finally convinced the guard to let us proceed. We set off, tackling the icy road with the excitement of a five-year-old kid on his birthday, as we slipped and slid our way up to the top!

As we sat looking back at those rolling hills, which for so much of my childhood stood as the promise of adventure and freedom, I couldn’t help but think that they had not disappointed.

Though it was only a few days of riding through the back roads and dirt tracks of the Midlands, those hills had planted a seed that has continued to grow, and although my future trips have been a lot more adventurous and hazardous, I will never forget this one.

Passport, warm clothes (even if it is warm when you leave, it’s always chilly at the top), raincoat, and camera.

Border times are from 08h00 to 16h00. Only licensed vehicles and 4x4s are allowed up the pass.