Layers of the Past in Stone

The Maloti Drakensberg Route, the longest recognised route in Southern Africa incorporates the high-lying areas of the Eastern Free State, Lesotho and the Eastern Cape Highlands, embraces the fabled Maloti Drakensberg and the extended uKhahlamba Drakensberg Park, a World Heritage Site. The awe-inspiring scenery here is of deep valleys, steep-sided gorges, and the high mountain passes which reveal layer upon layer of rock formed over 260 million years ago. It is within these layers that the story of the animal and plant life that once existed here is revealed – etched forever in stone. 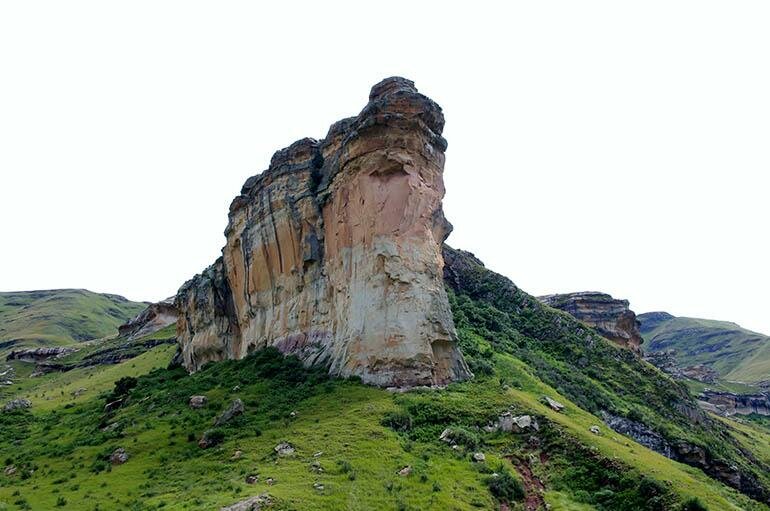 It is well to understand some of the geology and indeed the geography of this land in years gone by to appreciate the treasure trove of imprints left for us to enjoy. The eastern part of Southern Africa was once covered for the most part by giant marshes upon which sediments settled over millions of years, forming rocks that we know as the Beaufort Group. The continents then were joined into one landmass known as Gondwanaland and where the Maloti Drakensberg Mountains now stand was far from the ocean. In the south and east of Gondwanaland huge snow-covered mountains prevented this area from drying out as the melt-water from them fed the inland marshes and sustained animal and plant life here for a period of over 60 million years. In these sediments, the rocks of the Beaufort Group are found the traces of two reptiles, Dicynodont and Lystrosaurus and slightly higher in the red rocks of the upper Beaufort Group are found the burrowing mammal-like reptile Trirachodon.

Above this layer is the Molteno Formation of glittering sandstone where fossilized ferns are found in abundance. The region became far less hospitable about 200 million years ago when the drying climate reduced the water supply from the mountains although silt was still deposited into the marshes from the diminishing rivers. The red-orange rocks of the Elliot Formation were the result. These three layers, the Beaufort Group, the Molteno and Elliot Formations, comprising of sandstones and mudstones were deposited in the marshes over a period of 260 – 190 million years ago.

As the years progressed, between 190 –180 million years ago, the climate became drier still and the whole area became covered in sand dunes seen today in the distinctive yellow of the Clarens Formation. Fossils indicate that many animals still inhabited the region including the dinosaurs Massospondylus and Lesothosaurus. Massospondylus was a bird-like reptile approximately six metres in length living near the rivers and marshes and laying eggs in the sand – similar to today’s crocodiles.

The oldest known fossilized embryos in the world are believed to be a cluster of six eggs found in 1978 in the Golden Gate Highlands National Park. It is thought that just prior to hatching a sandstorm buried them. Lesothosaurus was a small carnivorous dinosaur and fossilized remains of these are found mostly in Lesotho. A small, burrowing shrew-like animal called Megazostrodon also inhabited this region and its remains are sometimes found in the Elliot and Clarens rocks.

Around 180 million years ago the “supercontinent” Gondwanaland began to break apart. Volcanic activity and intermittent eruptions over the next 45 million years deposited layers of liquid basalt resulting in a layer up to 3 km covering much of the land we know as South Africa today. Weathering and erosion since then have removed much of it – the thickest layers remaining being the high mountain land of Lesotho and the Maloti Drakensberg Mountains.

There are many areas which are accessible and where visitors are welcomed to explore the relics and history of this past. Golden Gate Highlands and Qwaqwa National Parks have some of the most important geological sites in the world, and with a guide the famous site where the fossilized eggs were discovered in 1978 can be seen. Dinosaur footprints, fossilized ferns and the burrows of the world’s oldest mammal-like reptiles can also be viewed. For more information contact 058 255 0012.

Near Mooi River in Kwa-Zulu Natal is situated the Kamberg Nature Reserve under the custodianship of Ezemvelo KZN Wildlife, and within the uKhahlamba Drakensberg Park World Heritage Site. Here on a short walk en route to Game Pass Shelter a number of fossilized plants can be shown to the visitor at Waterfall Cave. Contact 033 267 7282. The impressive tracks of a bird-foot dinosaur, probably Massosondylus can be found at Quthing Dinosaur Trackway Site in Lesotho. Contact Lesotho Tourism Development Corporation – +266 22 312 427. Other areas to see of geological interest include the magnificent Barkly Pass between Barkly East and Elliot on the R 58 in the North Eastern Cape, and information may be had from Barkly East Community Tourism Association 082 900 8362. The Moteng Mountain Pass is a breathtaking gateway into the northern alpine region of Lesotho. It is well worth a visit for the unique geological features as well as the awesome scenery. Access to it is from the Caledon border post and through Bothe Bothe – an easy drive from South Africa. Highly recommended for a visit are the Maletsunyane Falls also in Lesotho. This is a spectacular cut-back into the massive lava layer formed around 180 million years ago, and an insight into the various levels of basaltic deposits there. The falls, near the Semonkong Lodge, are the second highest in southern Africa with an unbroken drop of 196 metres. Contact Semonkong Lodge at +266 27 006 037.

The Maloti Drakensberg Route embraces some of the most spectacular and important geological, historical, cultural and scenic sites and experiences in the world, and encourages all to experience them!