Drinkers of the Wind

Arabian horses, or Arabs as they are known in equestrian circles, are characterised by their refined, wide-shaped heads, dished faces and large eyes and nostrils. The Arab is the oldest breed of horse in the world and the purest, with no influence from other breeds. They are known for their spirit and inquisitiveness, and are fittingly referred to as the 'Drinkers of the wind' because of their large nostrils that create an image of them drinking the wind. From around 2,500 BC, these horses were seen as valuable companions for their owners and this relationship continues to experience a dimension of existence that can’t always be put into words. 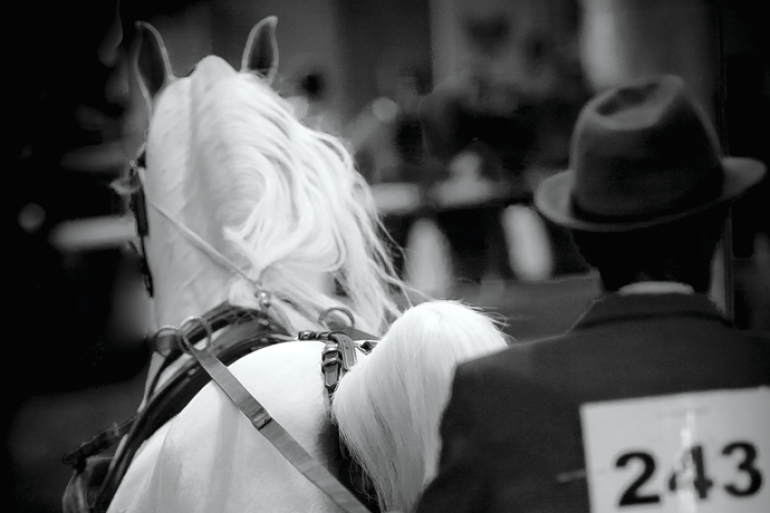 I grew up with Arabian horses on Kleinplaas, situated against the slopes of Paarl Mountai`n in the Cape Winelands. For years, my family has practised this equine sport of showing Arabian horses and today, it still plays an integral role in our lives. Various divisions of equestrian sport exist: dressage, show jumping, endurance, eventing and showing. Our sport falls into the latter category.

Each year, regional championships take place that culminate into the main event, the national championships. The shows are solely dedicated to pure-bred Arabian horses. There are three fundamentally different classes to compete in: the Halter classes, Riding classes and Driving classes. In the Halter classes, the handler brings the horse into the show ring on a lead and shows his or her horse to the judge, who rates the horse on various aspects, such as quality of movement and conformation. In the Riding classes, the competitor enters the show ring mounted on his or her horse. There are various Riding classes that have different specifications of the type of picture the horse and rider should create. In the Driving classes, the driver enters the arena, sitting on a cart that is driven by the horse and should also create a specific picture.

The Arabian horse is not only used for these shows but is the most widely used horse for endurance purposes. Endurance is another equestrian sport where riders race with their horses over long distances. The winner is the first one over the line, while the horse’s pulse must be below a certain level. In South Africa, Arabs also do well in general breed shows, where all breeds of horses take part.

To give you a complete overview of this interesting topic, I would like to tell you a story about how all the various aspects come together to make the practising of this sport possible.

It’s Friday night, a few hours before departure for the 2013 National Championships. Bags and riding tack are stowed away in the nose of the trailer. Hay bales are stacked on the roof of the Land Rover. Saddles, bridles, riding clothes, horse feed, tables, chairs and buckets are all ticked off on the list. A few hours sleep precedes our marathon trip to Parys, in the Free State; the venue for the championship. Morning breaks and we hitch the five-berth gooseneck horsebox on top of the bakkie. One at a time, we walk the horses into the trailer. Gates and doors are closed, lights and brakes are checked and we’re ready; the culmination of months of planning, training, preparing and putting together logistical plans. Our team consists of my dad, mom, sister, William Jongise our helping hand at the stables, and myself. The N1 lies stretched open before us - 1,300 km of it, and we will cover every kilometre of it at about 80 km per hour. It’s going to be a long trip.

It takes us two days to get to Parys. As per tradition, we overnight on a farm outside of Colesberg and have dinner at the Horse and Mill Pub, an old English pub in Colesberg that serves the best steaks in the country, straight out of the Karoo veld. After completing our second day of driving, the breathtaking Afri-Dome comes into view; a world-class facility with an indoor arena where competitors will be competing for championship titles in the respective classes. Our horses are put into their stables and the unpacking begins. All around the show grounds, competitors are getting ready for the week ahead. For the two days leading up to the official commencement of the show, riders ride their horses, preparing them for when they must enter the arena.

The show begins with the Halter classes. The horses are shown according to their age, mares and stallions separate from each other. The morning begins slowly with excitement building up to culminate in the Supreme Champion Mare and Stallion classes. Each day is topped off with an open barn party - where a stud hosts a get together and displays their horses for spectators. Spectators can then talk to owners and trainers if they are interested in buying a specific horse or using a stallion in their breeding programme. It’s always great coming to shows and seeing familiar faces; years of forging friendships makes one part of an entire community, which is evidence that horses act as a binding element between people.

In each category, there are qualifying classes in which the top five competitors qualify to take part in the Championship class - the title that everyone sets their sights on. On the Thursday, one of our horses, Shaheer Magato, qualifies for the championship in the Show Hack division; a riding style derived from dressage in which the rider must have great concentration and control to show the horse in ten different gaits. Later that afternoon, my sister and Magato enter the arena. There is absolutely no margin for error competing in this championship with such strong competition and we can only hope that we have trained and prepared sufficiently to reach our goal. With the crowd looking expectantly on, the judge in the middle of the arena takes the competitors through a series of gaits in both directions. At the end of the class, the riders are allowed to relax their horses as everyone awaits the result. The results are announced in reverse order, to keep it a mystery for as long as possible as to who will emerge victorious. One can almost hear the riders and their support teams repeat their own numbers in their heads in the hope that they will be among the top five. When third place is announced, repeating our number must have worked because my sister’s name is called out. We beamed with pride as she and her horse exited the arena; the result of a series of plans that had come together.

The highlights of every show are usually the English Pleasure classes and Native Arabian Costume classes. In the English Pleasure, the horse must perform with high-knee action and the high set of the neck. It really is a spectacular sight to see the horses and riders strut their stuff. In the Native Costume class, the horse and rider are dressed in a native Arabian costume to recreate the image of a rider galloping along the Arabian Desert horizon with his or her horse. The excitement of this class stems from the exhilarating pace at which it is performed.

This describes the immense value that these amazing animals bring to our lives. For any family, they act as a binding element. My parents are forced to leave their work for a week, I’m forced to leave my studies and my sister is forced to leave her schoolwork. For one entire week, we remove ourselves from the hustle and bustle and fix our attention on this project, in which each one of us is jointly and separately responsible to make a success of it.

Working with these magnificent creations ensures a touching relationship between the horses and us humans. First, we are taught patience. Training a show horse is like educating a child. The rider has to know that the horse will not get it right the first time, or the second or the third. For the horse to do what the rider wishes requires a great amount of factors coming together, such as the building of muscles to enable the horse to carry out the movements longed for and, most importantly, harmony and effective communication between horse and rider. Second, we are taught problem-solving skills. The act of training horses is all about identifying problems or so-called gaps in the horse’s performance. This activity is then followed by thinking of ways to solve these problems. The horse and rider are dependent on each other, with the rider bringing the intellect and vision to guide the horse’s input in a certain direction, and the horse brings the ability to make this possible.

I encourage families and individuals alike to join the Arabian horse industry, as it will surely bring a positive and dynamic twist to your life.