After six months of research and planning, Brian Jacobs, an accomplished sea kayaker, kayak fisherman and kayak manufacturer, and I were ready to make our way to the starting point of our kayaking expedition, Moroni, in the Comoros. From there, we would paddle to Pemba, in Mozambique, a stretch of 340 km as the crow flies, in approximately seven days. 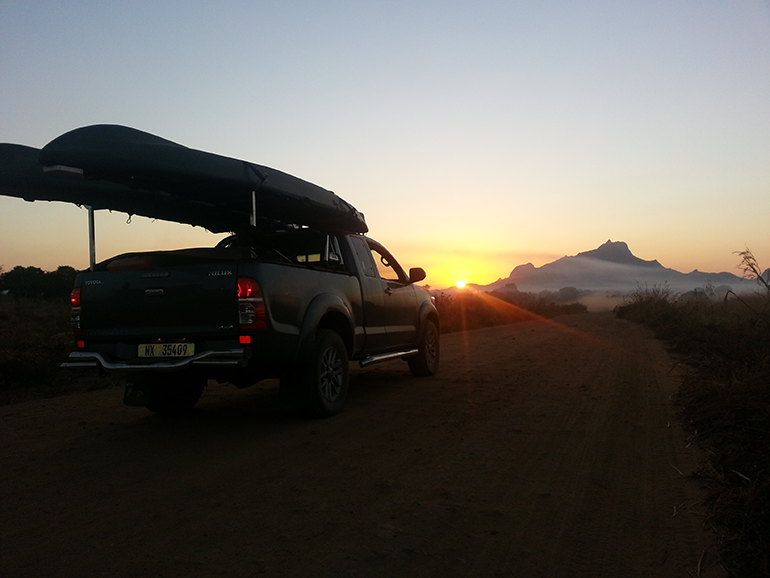 After spending 37 hours on 2,200 km of so-called roads, we finally arrived in Nampula, Mozambique.

However, after a frustrating, failed attempt to secure transport for the kayaks to Moroni, the next best option was to kayak from Pemba to Moroni and back again. This worked out to be double the distance, so we decided to make a few modifications to our kayaks, which included adding a small electric motor and sail to help compensate for the unfavourable current when making our way to the Comoros. But certain things, as we found out, could not be compensated for.

With our new plan in place, our gear packed and kayaks secured, we hit the road. After spending 37 hours on 2,200 km of so-called roads, we finally arrived in Nampula, Mozambique, and could virtually taste our destination, Pemba, situated 500 km to the north.

The city of Nampula is nestled between an impressive series of rolling hills and rising mountains. Home to just under half-a-million fervent entrepreneurial souls, it made for a prime spot to obtain the last of our provisions for our kayaking quest. Armed with our newly acquired one ply and crackers, we felt ready to face the challenge of this epic kayak trip. Or so we thought.

Some local children pose for a photo on the shore of the magnificent Malawi Lake.

With the alluring thought of ice-cold lagers and a shower awaiting us at Pemba Dive & Bush Camp, we made short work of the drive to Pemba, arriving just as the sun hit the horizon. This beautiful camp is located on a magnificent coastal stretch and overlooks the second biggest natural harbour known to humanity.

Later that evening, with the drool-inducing smell of prawns on the braai, fridges full of frosted beer and a roaring bonfire on the beach, thoughts of missing home soon began to fade. Nourished and fired up for our adventure, it was time to gather information from the experts; aka the locals. From the outset, I sensed they did not share the same opinion about the outcome of our venture. I had to wait until the next day to find out why.

Early the next morning, and day four of the trip, we began prepping and packing our aptly named kayaks, The Krakons (large never-say-die vessels). Fresh out of Legend Kayak’s factory, the kayaks had been put through their paces. The sail proved to be a beauty and provided me with a 4.5-knot speed. The motor, on the other hand, was not as accommodating or capable and duly discarded.

As the sun dropped behind the bay, we felt fairly confident in our preparations and a celebratory lager was promptly consumed. All that was required now was a break in the weather, more specifically, a few days without a strong wind, which was howling at a steady 20-25 knots from the south. Combined with a 4-knot current from the north, it would make for a bumpy ride.

Shortly after our celebratory sundowners, a delegation of experts, led by Lynne, Pemba Dive & Bush Camp's Manageress, and Zsa-Zsa, a 20-year sailing veteran, explained in no uncertain terms the error of our ways. First, we would most undoubtedly encounter breakers on the open water and second, the ocean takes a few days to settle down after strong winds (this was completely omitted in our planning phase). Somewhat red faced, we had to concede our planning was off by three months. Zsa-Zsa reckoned the channel would resemble a fish pond between October and December; apart from the odd cyclone. Fortunately, we are not okes that dwell on past mistakes and soon a new plan was hatched; we would transport our kayaks to Comoros well in advance and cross the channel in October 2015. In the meantime, we decided to take some time out and explore this amazing part of the world over the next seven days, and so our packing resumed in earnest.

Ibo Island is approximately 100 km north of Pemba and renowned for its superb fishing.

Fishing was something both Brian and I were keen to try our hand at and were confident we could easily paddle to Ibo within three days, with the assistance of a following wind. At this point, I will spare you the details of the dark days that followed and why we could hardly accomplish 40 km in 48 hours. Suffice to say, hardships befell us and after getting stuck on a tidal beach, two options emerged; either find a road inland, then collect our vehicle in Pemba and drive to Ibo or find a sizeable dhow as a charter.

On the Kazungula ferry.

Taking a selfie as we approach the beautiful Quililea Island.

Getting reading to try my hand at fishing from the beach at Quililea Island.

Our luck was in when we crossed paths with Captain Nacri, the formidable Mozambican owner of Banco São Paulo. The language barrier soon had us reverting to sign language and charades as we drew imaginary pictures on the side of his nine-metre dhow. Shortly thereafter, we were warmly welcomed onto his sea-faring vessel. With our kayaks and gear safely on board, we fought our way through the powerful shore breakers to arrive at Ibo. Or so we thought.

From the outset, it was clear the Banco São Paulo had seen better days. Two crewmembers had to permanently baili out water as we skimmed through the crystal-clear water of the Quirimbas Archipelago, an isolated and remote stretch of coastline where the marine environments and beaches are ecologically pristine and largely unexplored. Despite the challenges on board and the dhow taking a serious hammering, we instead set foot on the spectacular Quilalea Island five hours later.

Due to the wind, which was heading back south, Captain Nacri was no longer keen on to sail to Ibo. Instead, he convinced us to sail with him to Situ Island, where he could employ the local carpenter to repair his beloved dhow, before returning to Pemba.

On Situ, we led the island life for three blissful days, during which time the hull was revamped. The following day, now day 12 of the trip, we set sail back to Pemba in the company of some always-mesmerizing dolphins. On our arrival, we packed once more in earnest as only six days remained of our island holiday before we would return homea and there were still a few places we wanted to explore.

The days and nights that followed were magical. We enjoyed one fantastic night in Monkey Bay, Malawi, followed by three nights in Zambia, of which one night was spent in a very wild Lower Zambezi National Park. We allowed ourselves a quick stop at Vic Falls for the mandatory photos, and then it was on to Botswana, via the Kazugula ferry. We crossed the South African border post just before midnight.

As I write this, I am constantly reminded of all our plans that were rendered useless and I have come to the conclusion that you cannot dictate to Africa. The Mother continent demands respect. Africa is not for the faint-hearted!

Thank you to my sponsors Legend Kayaks, Cape Union Mart (especially for the Franklin Jacket) and ACDC Express Centurion for their tough-as-nails solar panels.

Call from the Sahara

Picture this: You are on a camel’s back, embarking on a journey of discovery...

Over the past few years, the term ‘recovery’ has become a bit of a buzzword...

After spending 37 hours on 2,200 km of so-called roads, we finally arrived in Nampula, Mozambique.

After six months of research and planning, Brian Jacobs, an accomplished sea...

Read more
To Noakes or not to Noakes

The Banting, Paleo and Tim Noakes lifestyle has caused a controversial...

Just like a fine whiskey that matures and gets better with time, as well as...