What makes an adventure a challenge? In the first part of my article about climbing Kilimanjaro with my three mates, I described some of the highlights and challenges we had to endure in the first three days. But the hardest part was still to come. 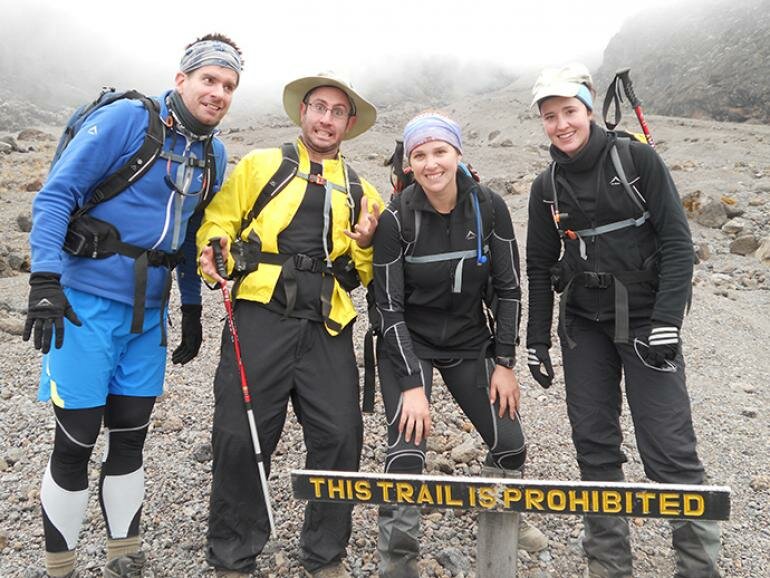 Day four was a tough day to wake up. it was ridiculously cold and we had more clothes on than you can ever imagine. This is what I had on: inner socks, summit socks, warm looking socks, hiking boots, compression pants, thermal underwear, snow pants, compression top, fleece top, shell warm top, Kilimanjaro jacket, inner gloves, warm looking gloves, outer shell gloves, neck warmer, buff, beanie, and headlamp. My hands and feet were freezing. The rest of me was Bloemfontein cold. I kinda knew something big was coming because our guides had packed a small oxygen tank. One hour into the climb we see another man being dragged down the mountain by his guide. He was almost delirious from altitude sickness and had so much snot running from his nose. Once we were done giggling about the snot we then realised we all had snot running from our noses.

About three hours in we were broken. The wind was painfully beating my face with extreme cold and large amounts of dust. We all were very emotional, but kept it to ourselves because we still had a long way to go. We stopped and huddled like frightened animals in a cave type of thing where a lady in another group fell in front of us vomiting. The guide was singing quietly to her, which was incredible. At this point you are not very sympathetic with people that are struggling because you can feel that at any stage that could be you and all you expect is for people to carry on and get done what we have spent the last four days trying to achieve.

With these types of challenges you don’t want to show any weakness as they are infectious. However, we were showing weakness. We couldn’t speak to each other. I had to hold back serious frustration with Janine (not her fault) as her walking style changed. I can’t speak for my team, but I fought serious demons for about three hours of that climb. Serious demons that I didn’t know I had. All you have are your thoughts and you are staring at a lit-up patch of dust in front of you and you are waiting for the altitude to take you. It was colder than -10 degrees that evening, my water pipe had frozen and man tears would have been a real consideration if they weren’t going to freeze too.

We got to Stella Point, which was amazing, but we still had 45 minutes left of climbing to the summit. At this point, you are high enough to know that you can make the summit, but the fact that you probably don’t even care goes through your mind. We could see the summit!

I won’t even attempt to try explain what we could see when the sun was rising as we were summiting. If you could fully understand what we saw, you would never have the need to climb this beast. We were shattered and to see something like that when you are in such pain is hard, but there is one thing that went through my mind. I wanted to get off that mountain, but I knew that what I saw in front of me was one of the most spectacular sights that I might ever see. I just wanted to make sure that I at least remembered it so that I could take the time and appreciate it sometime in the near future, when I didn’t want to vomit or jump off the mountain.

We summited Mount Kilimanjaro! Friends, family, fools, and foreigners - everyone was with us! We hugged each other at the top and didn’t speak much. It was too much for me. We spent another day-and-a-half moving very fast down the mountain. You can literally feel your body responding to more oxygen and the pressure in your head starts subsiding. We had a fat laugh on our travels back down talking about Janine's birthday (the trick) and how we were going to celebrate once we all had a shower and a massage.

We finally ended up at our hotel after six days up in the mountains, and all we wanted to do, in this order, was wash, tell family and friends that we were safe, and then celebrate Janine's birthday. All the above was done except taking on Moshi (Mosh town to the locals) for a sneaky party. We invited our guides for a lunch and managed to organise a birthday cake for Jan. This was not easy considering we were in a village-type place. Surprisingly she didn’t cry again. It was heart shaped (no choice on that). It was disgusting. She loved that and our card, and then we were drinking for the win!

After a long day in a tavern eating local food and getting quite rowdy, we ended up back in our hotel before sunset and it was time to really party South African style. Details are vague, but the four of us completely let our hair down and enjoyed the local drinks. The same wasn’t true for the other tourists in the hotel. I think mainly because Janine started singing and all the dogs in the village started howling.

We began our trip back to Johannesburg the next day and stopped in Nairobi for a full afternoon. That place is crazy! I only realised how insane the roads were when I got out of the taxi and realised I had ripped off the arm rests. After a really enjoyable day (pizza in Nairobi) we moved on back to SA!

So we all take on certain challenges in our lives, but this one was something that I didn’t expect. There we were, coming down from a summit that took us six hours to go up up and two to head down. There is an element of no respect for your body because it is time to stop the madness. It feels as though you are sitting on the sun, so there you are applying sun cream and dust at 7:30 a.m. to try eliminate one of your potential worries when you get back to camp. Sun cream, dust, wind, and cold burn are not so lekker together. No one cared (I did a little).Summiting a mountain is one of the daftest things I could ever imagine doing. Once you have achieved, what you have gone there to achieve you are physically at the hardest and furthest point from the actual finish line.

While we were walking up the mountain, conversation was about potentially one day doing Everest and other high mountains around the world, and when we were coming down, everyone said they would never even consider it.

Jan asked me at the top what was harder between Ironman and summiting Kili, and I couldn’t answer then. Only on the way down did I say Ironman, as you largely fight against your own physical abilities, while on Kili you are largely fighting against the elements. 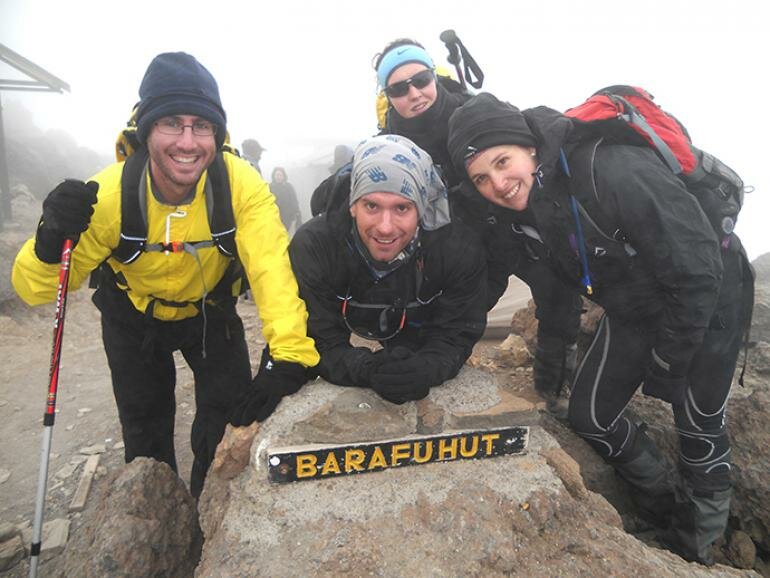 I would never climb Kilimanjaro again! Summiting was one of the toughest things I have ever put myself through but when you gather your thoughts and reflect on what you have put yourself through it becomes very clear as to what you have just done. All four of us were in a special place on this continent and at the same time, we were all in a particularly dark place. I never want to put myself through that pain again, but I know that overcoming that pain can never be taken away from us.

We walked down that mountain hurting so much, but all the time you have this silly little smile on your face knowing that no one can ever take what I have just done away from me, and you can put any challenge in front of me and it will pale in comparison. I am stronger because of it and that is why I would highly recommend climbing that mountain to almost everyone!

My team was outstanding and our leader and organiser, Janine, played out of her boots. It is an experience that is tough to explain to those who ask. For all those folks who have climbed Kilimanjaro before and experienced conditions like those, I take my hat off to you.

Thank you to everyone who contributed to our trip financially or with generous support. A special thanks to Janine for phoning. Chanelle, Janine, and Welly - what an adventure! (Proudly South African). If I could convince my brothers to climb that mountain, I would do it again.