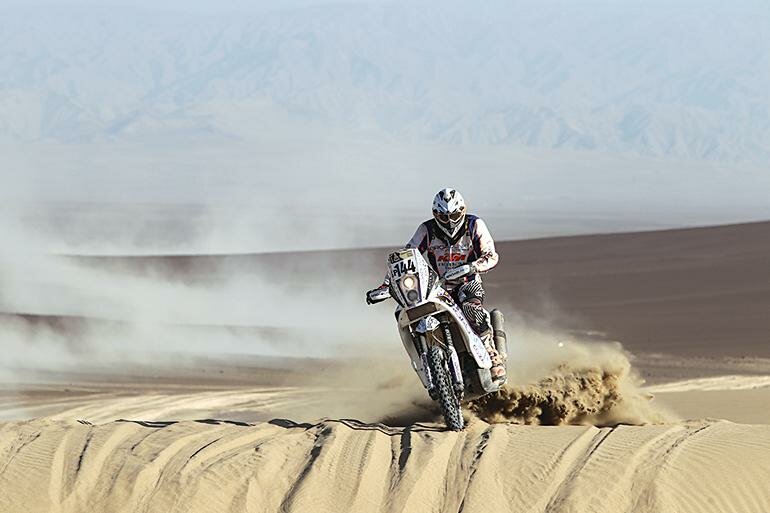 Sooner than expected the famed and feared Dakar Rally arrived. The last few months had flown by as I scurried around with some last-minute preparations for this 15 day, 9000km race. What gear to take? What spare parts would I need? How much warm gear do I take for the crossing of the Andes Mountains at sub-zero temperatures? These were just some of the questions I asked myself, after all this was my first Dakar.

I’ve been following this event from an early age and it has always been a dream of mine to take part, so when my title sponsor, Broadlink, suggested we go, I didn’t think twice. Making the decision was the easy part, getting selected by the ASO from a stream of entries was much harder. In addition, the bike capacity had been reduced to 450ccs and the general entry criteria was much stricter. I can’t begin to describe my elation when, a few weeks later, I received confirmation that my entry had been accepted. My start number was 144 and it was game on!

Alfie Cox, Ingo Waldschmidt and any other competitor will tell you just how big your commitment has to be to enter the Dakar. I can only compare it to the Tour de France, but if there was an Olympics for motorcycles, that would be my litmus test. The event is simply massive, drawing the attention of millions of spectators and fans from around the world.
Many months of preparation later, I was finally on the plane to Buenos Aires to fulfil my lifelong dream. The container, with four race bikes and 10 supporters’ bikes, was delayed and left us pretty stressed out, and for good reason. To cut a long story short, our bikes only arrived in Mar del Plata at 9pm the night before the race! It was a mad rush to get our back-up truck packed and all the navigational equipment fitted to the bikes in time for the scrutineering, which took place a mere hour before the start of the race at 6am. This inspection is completely nerve wracking because if anything is not right, it could mean the end of the race before it had even begun. Thankfully, the bikes passed the scrutineering and we were allowed to start! It was the latest that anyone had been allowed to start in the history of the Dakar ... thank you ASO.

With only two hours of sleep I was already exhausted as I set off that morning on the 860km leg, which included a short 60km special. I started off in 144th place, as I was unseeded in the rally world and thrown into the rookie class. As the race crossed Argentina, I managed to work my way closer to the front, the trick was to only ride as fast as you can navigate. The liaison sections, which are the regularity stages between racing sections, were really long, but the thousands of spectators along the way took my mind off the stress from the night before, and I now had a different kind of pressure to cope with; the road book. This was my biggest challenge adapting to the rally style of off-road racing. The road book is a paper map scroll mounted to the dashboard along with two ICO meters, a cap repeater and a Unik 2 GPS. The GPS does not have the route loaded, instead you need to follow the instructions on the road book, which directs you to certain waypoints that only become active 800 metres before you reach them, and then an arrow appears to direct you to the next point, accepts it and switches off again. If you miss any of these waypoints, you are penalised anywhere from 20 minutes to four hours. I missed two waypoints on day three and received a 40-minute penalty; lesson one was expensive, but I guess I had to pay some school fees. The road book became everything! I slowly got to grips with it and started to pick up the pace. 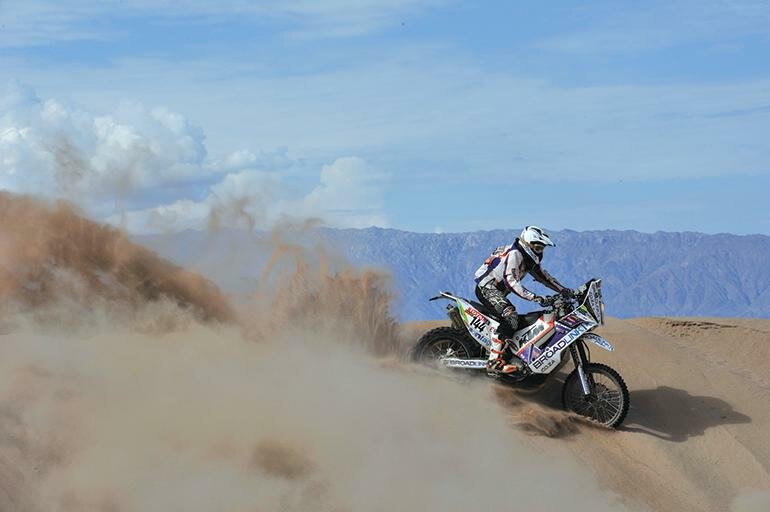 From Argentina the race wound its way into Chile, via the San Francisco Pass at 4700m, and into the Atacama Desert, one of the most uninhabitable places on earth because it hasn’t had any rain there for more than 300 years. The dust was so thick in places, especially in the many fesh-fesh (fine dust resembling cement powder) sections that led us into Peru, that it was impossible to make up any time on the rider in front of you. The speeds were insane, topping out at over 160km/h. There were some days that I backed off, simply riding to the finish to try my luck another day. One such day was day two when a French rider hit a cow at full speed, the bike bursting into flames from the impact. The cow died and we thought the rider had followed the same fate. Thankfully, he was only unconscious and my German friend, Daniel Schroder, activated his distress beacon and the medics were soon on site. They say that if you crash at the Dakar or in Paris, you’ll get medical help faster at the Dakar; l was not keen to put that theory to the test!

When I reached the bivouac at the end of each day, my routine started. First I would hand my bike to the mechanics, arrange bedding, take a shower and then spend at least an hour preparing the road book by marking danger areas, speed control zones and waypoints with highlighters. Thereafter it was dinner, followed by the riders’ briefing at 8pm to learn about route changes, dangers and fuel points. After that I laid out my gear for the following day, loaded the road book and got to bed at around 10pm. I would wake up at 5am for the 6am start, that’s if you were lucky enough to get any sleep at all with the continuous, loud buzzing of the generators and air tools throughout the night. But this was not a problem for long as eventually you are just so tired that you can sleep through anything.

As we crossed into Peru we experienced some deep river crossings and lot of dunes, which were really soft and exactly like the dunes I had practised on in Namibia with Ingo Waldschmidt. The dunes were the most fun, especially on a couple of occasions when Daniel Schroder, Chris Birch and I happened to meet up in the dunes, put foot to metal and motor it across them in playful abandon. However, the second last day nearly ended in tears when Chris jumped off a high dune and flat landed at the bottom, smashing his face on the road book and breaking two bones in his ankle. Reality struck home as we realised that it was too close to the end to ride as fast as we were. Chris was lucky that there was only one day left, and although he was in a lot of pain he managed to finish.

I was super excited as I rode the last 100km liaison section into Lima, through thousands upon thousands of cheering spectators. I crossed the finish line 22nd overall, was the second rookie in and winner of the *Elf Trophy.

Although this ultimate adventure has come to an end, the sights, sounds and sensations of an exceptional life experience will remain - thanks to Broadlink and KTM. And, I’ll be returning at the end of the year, with my teammate Riaan van Niekerk, to give it another shot. So pack your bags, we’re going back to South America and it’s gonna be another heck of a ride!

Interesting facts about the Dakar Rally

• The roots of the Dakar Rally go back to 1977, when Thierry Sabine got lost on his motorbike in the Libyan Desert during the Abidjan-Nice Rally. Saved from the sands close to death, he returned to France enthralled with this landscape and promised himself he would share his fascination with as many people as possible. Since then, a unique event sparked by the spirit of adventure, open to all riders and carrying a message of friendship between all men, has never failed to challenge, surprise and excite.

• The Dakar is known as the world’s most dangerous off-road endurance race.

• The 2012 Dakar Rally is the 33rd running of the event and was held in South America for the fourth successive time.

• The Dakar’s bivouac is a temporary travelling town, revolving around the drivers and their teams.

*Elf Trophy: Is a trophy and prize reward for the first five competitors who don’t benefit from any individual or personal technical support except the one planned within the framework of the present Elf Moto Trophy, and who appear in the final ranking of the rally.