Hélder Rodrigues takes fourth place for TEAM HRC, his best result to date, and climbs the leader-board in the Rally Dakar 2014. 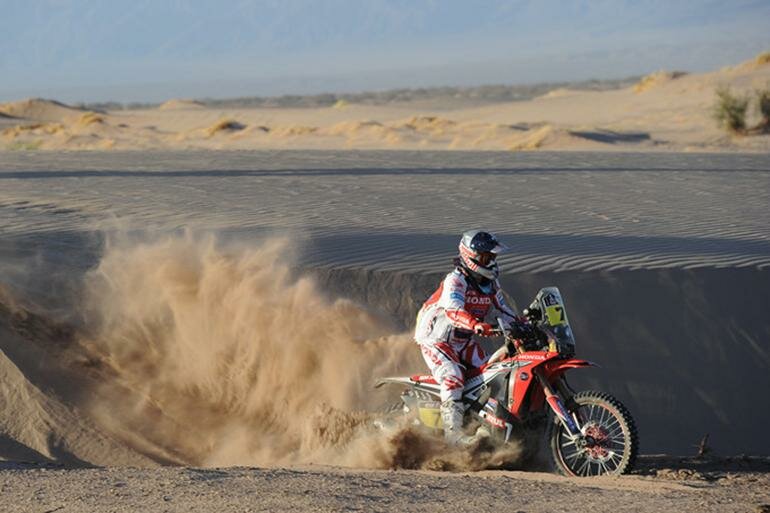 Joan Barreda sped off from sixth place today, looking to make up for lost time and straight away started clocking up some of the best times. Nevertheless, as he caught up with the riders ahead, the group took a path which turned out to be a mistaken one, and thus the rider concedes time to his closest rivals. Barreda finished in 17th place some 44 minutes off the winner of the special. In doing so, the Spaniard drops back into second overall place behind Marc Coma. Javier Pizzolito played it safe and finished in 33rd place. This morning’s stage took the riders through the dry scrubs, one of which got caught up between Paulo Gonçalves’ engine and exhaust setting the area on fire, which then spread to the engine. The flames engulfed the bike of the FIM Cross-Country World Champion, who although escaping unhurt, is forced out of the competition.

The riders on the new production Honda CRF450 RALLY, Pablo ‘Cacha’ Rodríguez and Laia Sanz, finished amongst the front-runners once again. ‘Cacha’ scored the 16th best time against the clock and Laia finished 26th moving up into 16th overall place in the standings.

Helder Rodrigues | 4th | +25'53 | TEAM HRC
Another day at a really long and really tough Dakar. It’s the fifth day of the hardest Dakar yet. Even though it’s only the fifth day, it’s been really difficult. The Dakar is so long and you have to keep up the concentration and be really strong to make it through the day and get a result.

Joan Barreda | 17th | +44'20 | TEAM HRC
It’s been a really hard day, one of the most difficult, with very high temperatures and soft sand. Every day it just gets tougher. I had an issue with the fuel at the start of the special, but after I was able to get back into it. I caught up with Marc Coma and the fuel problems came back when I was looking for a waypoint. I lost a lot of time trying to repair it. The most important thing is that we finished, we are still in the race. Let’s see how the next few days play out.

Javier Pizzolito | 33th | +1:14'44 | TEAM HRC
A really hard special. I had to start out from behind and struggle against the dust. Later the track opened out a bit and I was able to raise the pace and catch up with the riders in front. After I had a slight problem with the fuel that held me back a bit and another stage escaped us. But it’s always a plus to arrive. Today various bikes caught fire and it’s another filtering stage. Over a 120 bikes are out, so to make it back to the bivouac is good news.

Event information
Friday, January 10
Stage 6: Tucumán -Salta
Liaison: 64 km | Special: 400 km | Total: 464 km
The quest for the best time
Once they have left Tucuman, the cars will head north and drive along part of the renowned Ruta 40, and continue on in the heart of one of Argentina’s most beautiful landscapes. The possibilities to widen the gap will be limited but the most skilled riders may be able to seize the opportunity of adding a stage to their list of wins. A new trip to the mountains will take motorcyclists to the banks of the rivers. They will have to remain vigilant until the very end of the stage as the region is frequented to a great extent by animals of all sizes. Then they will finally be able to rest.