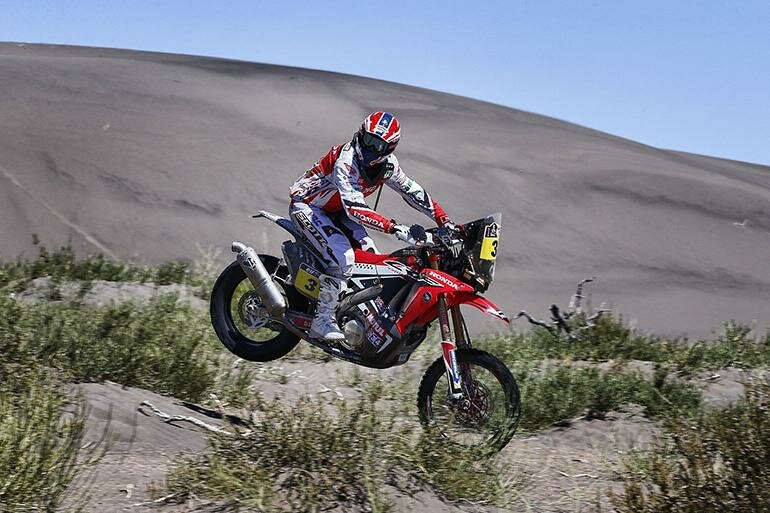 Joan Barreda took victory in the third stage of the Rally Dakar 2014, and in doing so widens the deficit over his nearest rival to 13’04 minutes. This is the third straight win for Honda in three outings so far in the rally, and the second victory for the Spanish rider from Castellón, bringing his career track record at the Dakar up to seven.

Sam Sunderland, as victor of the last stage, set off from the front of the rally. The British rider from TEAM HRC held his place firmly until the arrival of Joan Barreda, who quickly took over the leadership of what was a very complicated third stage of the Dakar. Barreda stayed at the head until the race wound up in San Juan.

The second rider from TEAM HRC to finish turned out to be Helder Rodrigues who arrived home in 15th position. In spite of some setbacks, the Portuguese rider pulls back various positions and is now 14th in the overall standings. Sunderland and Paulo Gonçalves, after wait the helicopter for another rider injured, both made navigational errors and finished the special further back as Javier PIzzolito.

The riders arrived back at the bivouac, and as this is the first of the marathon legs, will find no one other than their own TEAM HRC members.

Today’s route had been reduced to 130 kilometres, as the first stretch of the special was in no condition for racing after the heavy rains of the previous week. The rest of the special covered a more normal route including some mountains zones, with hard ground and a lot of complicated handling.

One again Laia Sanz, a member of Team Argentina put in an excellent performance finishing in 20th place. Likewise, Jean De Azevedo (Honda Brasil) and Cacha Rodríguez (Honda Argentina). All the riders that Honda will shortly have bikes available for have began the rally really well.

Joan Barreda | 1st | 03:47'03 | TEAM HRC
This has been a really exceptional special, one like the Dakar has never seen before. Not only for the altitude but also for the hills and the steep slopes that we have had to endure. It was like a trial. In second gear, revved up, then stopping for breath before taking off again. A real trial run where you just had to try and not make any mistakes and keep up the concentration. The navigation was really tough and at no time did I really stop to see if I was on the right path. We crossed a few rivers at the start. I caught up with Chaleco and then Sam, who I saw had taken the wrong route. From then on I did the rest of the special on my own. In the final few kilometres on the way down I was able to open the throttle until the end. It really was a difficult one for everyone.

Helder Rodrigues | 15th | +37'36 | TEAM HRC
A really difficult stage. I got lost and it took me a long time to get back on the right track. But I’m very happy to be back at the bivouac. Today I could have lost the race, but I’m still in with a shout in spite of dropping a few minutes.

Paulo Goncalves | 52nd | 2:13'56 | TEAM HRC
I was up at an altitude of 4,500 metros with Sunderland and Grabham and we couldn’t find the right way. Grabham took a path which wasn’t the right one and we followed him. We lost loads of time looking for the right one. I realize that my Dakar is over. From now on I’ll be focused on helping out Joan Barreda.

Sam Sunderland | 54th | +2:28'06 | TEAM HRC
For a while I opened the way, but I had a fall on a very steep slope. I lost a lot of time looking for the right route... at 4000 metres you get a bit disoriented. I found Gonçalves who was waiting for a helicopter to help Faria and we rode together. I fell several times as well as getting lost a lot. It’s an experience that we will have to learn from.

Event Information
Wednesday, January 8
Stage 4: San Juan-Chilecito
Liaison: 210 km | Special: 353 km | Total: 563 km
Mountain and countryside
The strategy of the motorcyclists will come into play: initially their navigational skills will be seriously tested at the beginning of the morning, and then they will be faced with the problem of worn tyres, as they have already been over-used the day before. The Dakar's competitors haven't faced a special stage this long since the historical one from Zouerat to Tichit in 2005! They will have to cross rivers, descend the canyons in a Wild West setting and beware of the other participants: as these terrains are often wide o pen, it will be entirely possible to overtake fellow competitors.