The first woman around Africa - Part 2

This is the remarkable journey of Jolandie Rust. Around Africa. On her motorbike. On her own.

Jolandie Rust set out on 27 April 2011 from Cape Town on a bicycle. She made it to Northern Angola in August of that year where a group of four knife-wielding thugs stole her bicycle and all her gear from her. She was forced to return to South Africa and to regroup. Despite endless efforts to raise sponsorship, no money was forthcoming from within South Africa. Angola stepped in and sponsored her to achieve her dream. Through the generous and ongoing sponsorship from Angola, she was able to set off from Johannesburg again on 1 April 2012 and to re-start her dream to become the first woman to solo circumnavigate Africa from Agulhas on 7 April 2012. This time on a BMW Dakar motorbike.

Jolandie made it all the way to Morocco, however, visa issues brought her journey to halt and she was forced to return to South Africa to apply for Schengen, Algerian, and Tunisian visas. Whilst at home and scouting for new touring routes with a friend in Mpumalanga, the BMW 1200GS she was riding pillion on came down on her ankle, snapping her right fibula and tearing the ligaments. This necessitated a slow six-month recovery.

Finally, in July 2013, Jolandie was back on the road. After a frustrating few days in Morocco to get Dax released from customs, she did a whirlwind trip through Spain, France, and Italy before crossing back into Africa via Tunisia (Algeria refused to issue her with a visa). A proud and hugely relieved Jolandie made it to the northernmost point in Africa, Cap Blanc near Bizerte. Another milestone ticked.

Waiting to hear whether she would be able to cross through Libya despite the political unrest in that country, she took in some of the sights Tunisia had to offer. Top of her list was the Star Wars set near Matmata. Soon she was transported to the planet Tatooine, and, disappointed that Luke Skywalker wasn’t home, she returned to Tunis. By now it had been confirmed that she would be able to collect a visa for Libya at the border.

The single decision that speaks volumes about Jolandie’s bravery, her determination, and ability to tackle challenges head-on was the decision to take on Libya. For any person this is a daunting prospect. Even more so for a woman on her own. On a motorbike. Besides the visa being pricey, a further requirement is to have a guide or escort every step of the way. As she crossed the border at the Ras Jdir post, she was surprised to find a group of more than 20 bikers to welcome her to Libya and escort her to Tripoli. News of her arrival in Libya spread as quickly as red carpets could be rolled out. The Minister of Tourism personally took time out to meet her and, amidst offers of assistance, arranged to put her up in a very comfortable hotel for four days. The Libyan Motorcycling Federation made a generous donation towards her trip and arrangements were made to give Dax a well-deserved service free of charge.

When she reached Misrata, her fellow riders informed her that they wouldn’t be able to continue with her and she would have to ride to Ajdabiya on her own. More than 600 kilometres for a woman alone on a motorbike through Libya? Unheard of! But nothing deters Jolandie. She pulled the throttle on Dax back and rode on. She was waved through at the first checkpoint. At the second checkpoint she was met with the by now familiar surprised look on the officer’s face when instructed to remove her helmet and he realised a woman was standing in front of him! She phoned a friend who could explain her situation to the officer in Arabic. The officer told her to proceed, take care, and not to stop for anyone until she reached Ajdabiya. And thankfully nobody did.

Since Gaddafi was toppled in 2011, Libya’s political reconstruction has been marked by brutal violence and instability. Yet, this country revealed its softer side to Jolandie. The kindness she experienced in Sirte, a city heavily damaged in the civil war, was a moving experience. A kind gentleman took her to his house and offered her dates and fresh milk. He describes sitting in his house with bombs exploding outside and automatic weapons tearing down his walls: "My heart breaks as we ride through the city and I bear witness to the catastrophic consequences of war. The pain and anguish is so tangible, it’s like a thick fog that hangs in the air."

Arriving in Tubruq, she was yet again welcomed by a television crew and the interview was aired on Libyan TV that evening. It remains incredible the rewards one finds should you choose to take the road less travelled.

By now, violence following the ousting of Morsi had erupted on the streets of Cairo and a curfew had been imposed. Yet Jolandie was determined to forge ahead. A fellow adventure rider met her at the Egyptian side of the border and what initially looked like an easy border crossing, turned into a nine-hour delay on the Egyptian side. In Cairo, Jolandie experienced the time-consuming process of visa applications and Dax was in need of a service.

Spending almost three weeks in the capital of the Mother of the World meant there was time for some sightseeing. First up was a much-anticipated visit to the pyramids and camel ride, as well as a weekend excursion to the Bahariya Oasis and the amazing white and black deserts.

With the paperwork finally sorted, the journey south could begin. In the coastal town of Hurghada the Governor presented her with a medal to honour her efforts, and in Luxor she visited the ruins of the sandstone temples. Aswan was the last stop in Egypt before boarding the ferry to Wadi Halfa in Sudan. But before leaving Egypt it was time to receive another trophy, this time from the Goodwill Ambassador of Cross-cultural Tourism. Incredible!

Whilst making arrangements to have Dax loaded onto the ferry, Jolandie met a French guy on a BMW R1200GS who was heading to South Africa. Together they hit the new main road through Sudan and on to Ethiopia. After the northern Africa desert, the lushness of Ethiopia was a welcome change. Entering Ethiopia Jolandie got the feeling for the first time that she was really on her way home. On her way to realising her dream. Though the roads through Ethiopia were very good, she had never experienced so many people, donkeys, oxen, and goats along the side of the road. It was impossible to stop without being swamped by people whose only vocabulary seemed to be: “You, you, you, you … money, money, money!”

But ahead lay the notorious Hell Road through the north of Kenya. And Hell Road quickly claimed Dax’s rear shock. Despite continuing with extreme difficulty, with a fully laden Dax and severely compromised suspension, Jolandie safely made it to Nairobi, extremely proud not to have dropped Dax at all on Hell Road.

“Learn to smile through tough times and you can overcome anything!” - Jolandie Rust

Whilst waiting for a new shock absorber to be shipped to Nairobi, unrest was brewing in northern Mozambique. This necessitated a change in route. With Dax’s rear suspension replaced, Jolandie headed through Tanzania and on to Malawi. She was exchanging money at the border when a group of guys surrounded her and demanded that she hand over the money she was about to exchange. Being outnumbered she had to part with $100. A lot of money when the budget is running extremely low.

After relaxing for a day next to Lake Malawi, home was calling and there was only one more country to go. In Mozambique Jolandie stopped off next to the ocean again for the first time since leaving Egypt at Inhambane. But on the day before she entered back into South Africa, the sub-frame bolts on Dax simply snapped. The load had been heavy and the road had been long! Fortunately, Jolandie had spare bolts and was by now a masterful mechanic, allowing her and Dax to return to the road in no time.

On Sunday, 24 November 2013, Jolandie again stood at the stone marker in Cape Agulhas. The grey clouds that had gathered on this spot to see her off on her journey on 7 April 2012 were possibly reflections of the mixed emotions she felt within, leaving the known and familiar behind. But now, having come full circle, the clouds made way for azure blue skies to celebrate the immense joy of reaching the end of an epic journey. A remarkable young woman and her Dax had truly conquered Africa. Next, the world? 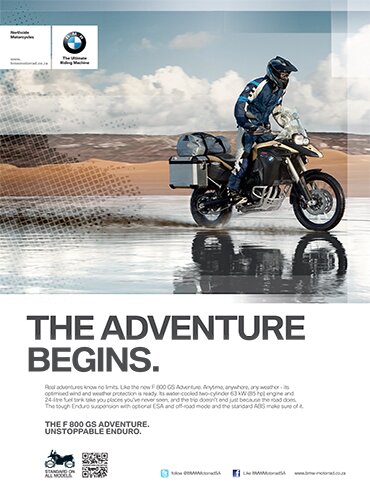