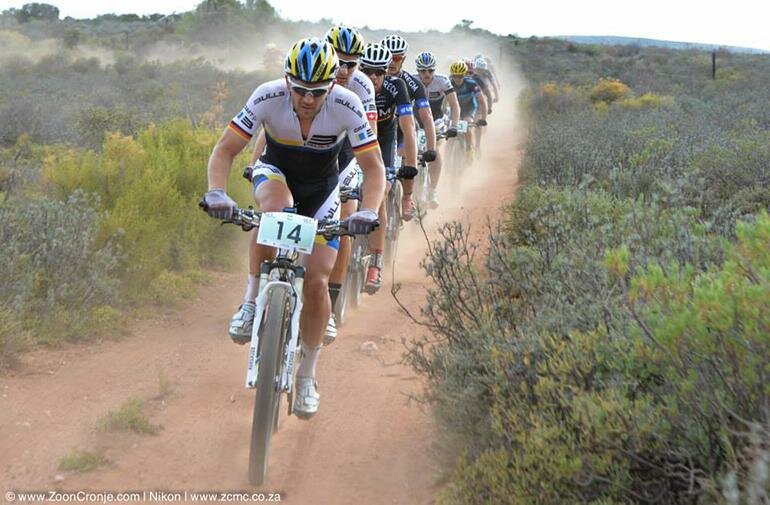 Huber, a 28-year-old former Swiss national champion, clocked a time of 04 hours 47 minutes 46 seconds, almost nine minutes faster than the previous record of 04:56:29 set in 2013 by compatriot, Christoph Sauser (Specialized Racing). It was Huber’s first attempt at the 121km event, which includes a demanding 2 900 metres of vertical ascent.

Sauser, the current marathon World Champion, was runner up on Saturday in a time of 04:54:33, also eclipsing his previous best time, but still well behind the rampant Huber, who rose to global prominence when he finished runner-up in the 2013 ABSA Cape Epic stage race with German teammate, Karl Platt.

Platt finished third on Saturday in a time of 04:55:16, with Czech Republic’s Frantisek Rabon (Specialized Racing) securing fourth in his first race as a mountain bike pro following a decade-long career as a road cycling pro. Erik Kleinhans (Team RE:CM) was the first South African finisher in fifth place.

“I must say I was surprised to win by such a big margin. Being the first race of the year I didn’t know what my condition was like and I’m still in training, so I didn’t peak especially for this race,” said Huber.

“This Attakwas race was a very good allround test. The first half was very rough and technical. I couldn’t ride up some of the climbs. Not many of us could. The second half was more rolling, but still long and tough,” added Huber.

Huber took the lead by riding away from defending champion, Sauser, with 70 kilometres remaining while climbing through the Attakwaskloof Pass, a rugged, scenic 300-year-old ox-wagon pass through the Outeniqua Mountains.

“I didn’t attack Christoph, I just rode my own pace and I noticed he couldn’t stay with me. I thought that with the tough last 60km I should wait for him, but then I realised we were both riding alone. And so were the others behind him all riding alone. The wind wasn’t so strong, so I decided to give it a full go from there and it paid off. This is definitely one of the best wins of my career.”

“I’m very pleased to win again. It was a good winning margin, but it’s never an easy race this. I was hoping for a fast time and I pushed it really hard in the final 50km, a lot of the time there I was on my own,” said Kleinhans.

“Early on it was just Robyn (De Groot) and I in the lead and in a rough section I got away from her because she is not so good in the technical stuff. Then I tore a tyre sidewall and managed to nurse it to the first tech zone where I got another wheel. I managed to catch Robyn again before the King of the Mountain at about 55km and then I just focussed on staying smooth and trouble-free to the finish,” added Kleinhans.

For full results and other race information, visit www.atta.co.za