The Kargo Pro MTB team got their second month of the year underway in dominant fashion on 1 and 2 February as the weekend’s action saw the proudly South African, UCI-accredited outfit clinch no less than four podium finishes at cycling events across the country. 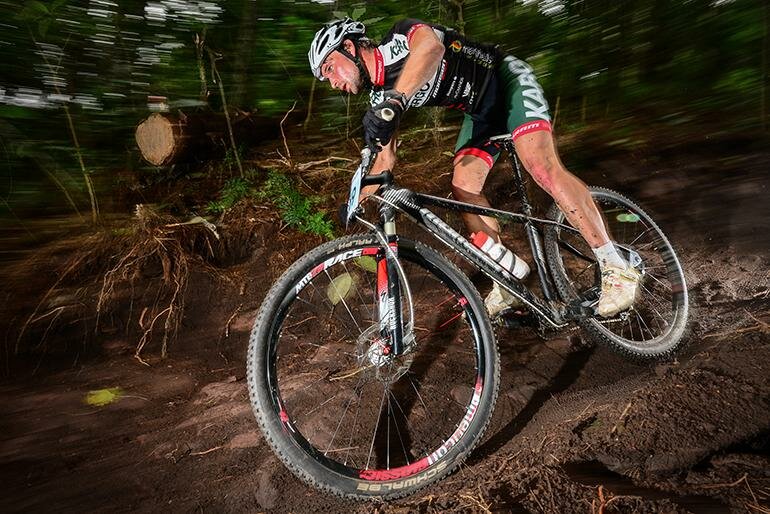 On the back of team ace Rourke Croeser’s third place finish at the recent African Continental Championships in the Western Cape, fellow elite contender Stuart Marias got his first win of 2014 when he claimed victory in the first leg of the Mpumalanga Cross Country Provincial at Uplands College in White River, finishing ahead of recognized South African mountain biking personality Max Knox.

“I was great to get my first win of the season!” Marias said afterwards. “Before we even started I knew, with guys like Max (Knox) on the start line, it was going to be a tough race so to have finished ahead of everyone else was great.

“The elite men set off straight up a climb and, with it being a mass start with the under-23 men and woman as well as the elite woman, being in the front early was going to be vital.

“Having not ridden the course beforehand I settled in behind Max to get a feel for the course as I had heard there were some pretty tech sections that I was a bit apprehensive of.

“I attacked on the second lap, opened up a gap of around twenty to thirty seconds and from this point onwards I was able to go solo all the way to the finish especially after Max unfortunately crashed out in one of the rock gardens during his third lap,” he added.

“It was one of the best routes out there and, with loads of single track, it was always going to be an interesting race that unfolded with even just one mistake have a big influence on final positions,” said Walker.

“It was a good day out for us though and it was nice to be back on the podium again,” he added.

A little further South in the Eastern Cape, junior newcomer Marco Joubert flew the Kargo Pro MTB flag high throughout the weekend at the VW Herald Cycle Tour where he won Saturday’s 60km Adventure mountain bike race before he turned his attention to the roads on Sunday and finished a commendable third in the junior age group.

“Three elite riders and I pulled away from the rest of the field at the start before two attacked on the main climb 20 kilometres into the race,” explained Joubert. “I was a little behind coming into the single track section but managed to haul them a little later.

“Once I got past them I managed to open up a bit of gap of my own but, with the last 20 kilometres being on flat district roads, I knew it was going to be tough to hold them off all the way to the finish.

“The two caught me with 15 kilometres to go and they then took turns in attacking to try shake me off. Fortunately I managed to stay with them though and, with 200metres to go I made my move, just managing to hold on to take the win, which I was really happy with!

“Sunday’s road race, with a Saturday’s tough 60 kilometre MTB race in the legs already, was always going to be tough, especially with the likes of Darren Lill, Kevin Evans and James Reid in the field.

“Unfortunately my Kargo teammate Paul Rodenbach and I came off the front bunch at the 20 kilometre mark and formed a group of five in the chase group.

“We gave it our all but, even though my legs started feeling a whole lot better at the 50km mark, we just couldn’t close the gap to the leaders and eventually finished ten minutes behind the winner.

The Kargo outfit will now look to continue their good run of form when Croeser follows in Joubert’s road racing tyre marks as he looks to turn a few heads at the South African Road Championships in Westville, KZN this weekend.

More info can be found at www.peschlracing.com