The 28th running of the prestigious Langebaan Dash was held on 25 January. This event is reputed to be the biggest kite event in the world, and it lived up to its reputation with 200 entries and a large contingent of overseas sailors.

Adding to the appeal of this race, and what makes it special, is the involvement of so many West Coast water sport enthusiasts, who pitch in to help with the organising, marker boats and rescue services. Furthermore, the Downwind Dash not only attracts the professionals but families too. The youngest sailor was 11-year-old Nichlas Adriaens, who hails from Cape Town, while the oldest competitor was Kenny Mick, aged 62. There were a number of competitors over 50, proving that anyone can still kite or windsurf.

This year was an anxious one, as the wind building up to the Saturday race was uncertain. But by Thursday, predictions looked favourable and the entries started rolling in. By mid afternoon, the wind picked up and contestants were raring to go. Unfortunately, the start of the race had to be delayed due to a tanker leaving the quayside. As the vessel cleared the channel, through which the race would sail, a start time of 15h30 was announced. It was touch and go whether the tanker would make it through the harbour entrance in time, but race control was able to announce an open passage and it was clear to get the race underway.

With the adrenalin pumping and kites making a colourful display in the sky above, the beach competitors were more than ready to take on the challenge that lay before them. A jet ski going flat out parallel to the beach in Langebaan set the first half of the fleet off along the gruelling 20 km course. The first kiters passed the finish mark near the beach in Saldanha 23 minutes later, at an average speed of 52 kph. Four minutes later, the second half of the fleet was off, trying their best to catch up with the leaders. 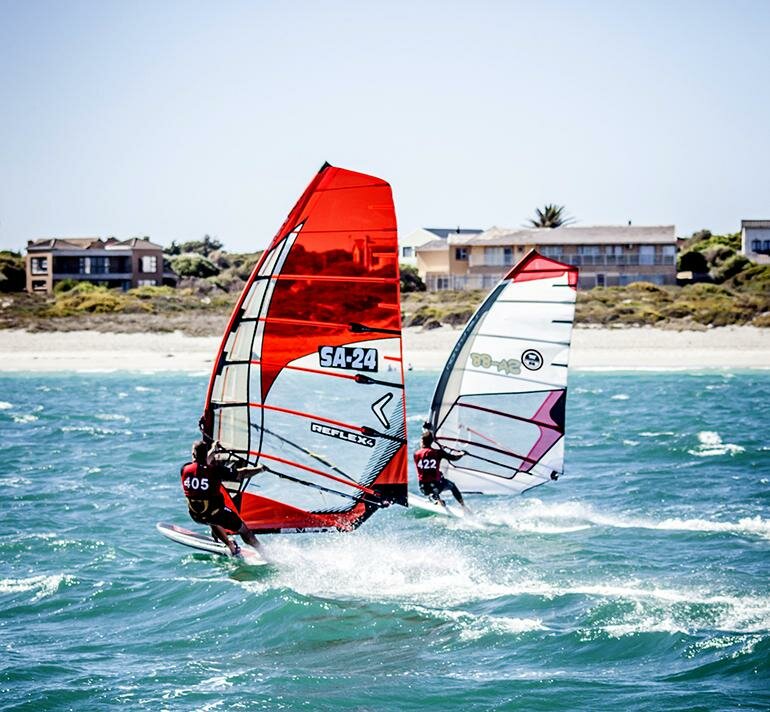 At the first turning mark, there is always congestion as the fleet has not spread out yet. This race was no different and the first rescues took place as kite ropes got tangled. The second leg was the easy one, as the legs were not tired and the swell not too bad.
However, back from the turn near the beach and the hard part started, with the longest reach to the end of the iron-ore jetty through big swells, which were more than a metre high. There was carnage, with the majority of the 25 sailors rescued coming to grief. Fortunately, there were no serious injuries, although one kite board rider who was suffering from shock had to be taken to hospital.

The big question every year is will the kites or windsurfers be the fastest? This year it was the windsurfers, who were first to pass the winning post and well ahead of the kites too, with the first windsurfer some five minutes before the first kite.

Unfortunately, for the windsurfers, there was a lot of confusion with a spectator's boat near the third mark of the course, which made identification of the mark
difficult for the riders.

The first windsurfer turned around one of the spectator boats and the rest of the windsurfers followed. This resulted in the first six finishers having to be disqualified for sailing the wrong course, and so the kite sailors took the official first few positions, with Oswald Smith claiming the Downwind Dash 2014 title. First across the line in the Ladies was Lyde Heckroodt, with Carl Fereirra taking the Junior’s title.

As the race is open to all types of craft, there were three hobie cats that completed the course, but 20 minutes behind the winner.

It was a fantastic day of racing, with non-stop aqua action keeping the spectators enthralled from start to finish.