Invest Africa has won Race 1 of the Clipper 2013-14 Round the World Yacht Race by five miles after race organisers had to shorten the course because of prevailing conditions. 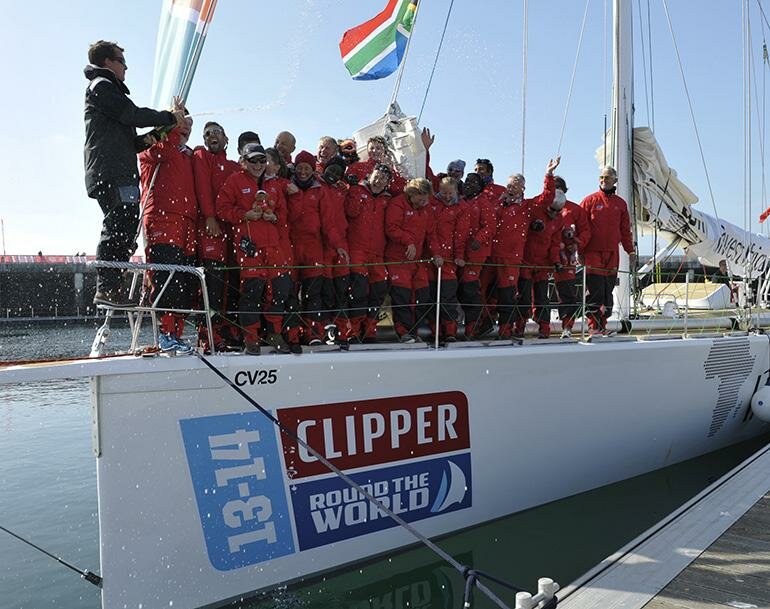 In addition, two teams received time penalties for infringing the Dover Traffic Separation Scheme (TSS). This resulted in Mission Performance and Old Pulteney slipping from potential podium places in second and third respectively to the bottom of the table.

Invest Africa Skipper Rich Gould said: “It is a really great way to start the race by winning Race 1. We took a gamble yesterday morning and sailed away from the fleet and it paid off. Everyone really concentrated on getting the spinnaker up and trimming all the time and it got us ahead of the rest of the fleet.

“Coming in in first place is a really nice morale boost and we worked the boat hard in some challenging conditions so it is fantastic to get 12 points in the bag already.”

GREAT Britain skipper Simon Talbot and his crew came in in second place. He agreed it was a real game of snakes and ladders but added his team are over the moon about their podium place.

“We fell into a wind hole off Dover but I kept telling everyone it's not over until you've crossed the line and the gun has gone. They kept pushing and never gave up and then we overtook Qingdao 15 minutes before the end of the race in thick fog with a tactical gybe to leapfrog them.”

Gareth Glover, Skipper of Qingdao, added: “It was very difficult with some light winds after a good start. We had problems with our spinnaker but we managed to sort it then fell into a wind hole so it was a frustrating race.

“The boat and crew sailed well though and everyone is gelling brilliantly, so we are delighted with a podium spot.”

Race Director Justin Taylor made the decision that the yachts were to cease racing yesterday afternoon because of a lack of wind and strong tides.

The boat positions were then used to calculate the rhumb line distance to Creac’h Lighthouse on Ushant off the French coast.

The result is still provisional until evidence of positions is verified.

Regarding the penalties, Race Director Justin Taylor explained: “Although Mission Performance and Old Pulteney finished second and third respectively, they both admitted to infringing the Dover TSS, and as per the Course Instructions have both been given a six hour time penalty plus an added time penalty for not returning to the position of the infringement before starting to re-race.

“This resulted in a seven hour 20 minute penalty of Old Pulteney and a nine hour penalty for Mission Performance, putting them at the bottom of the table. It will be very tough on the teams but an important lesson that the Course Instructions must be followed to the letter.”

Henri Lloyd and Derry-Londonderry-Doire tied for eighth. Even though they were separated by several miles on the water, both their distances to the waypoint used to determine the finishing order when the race was shortened were identical.

The remainder of the fleet will arrive in Brest, France, this afternoon (local time) for a four-day stopover before the race to Rio de Janeiro, Brazil, starts on Monday from the Rade du Brest.