It all started on 24 June 2013 when I got the wild card to participate in the third stop of the PWA World Tour, held in Alaçati, Turkey, from 19 to 24 August. I was awarded the wild card because I won the South African Championships, and this was probably the most exciting news I'd ever received. It was also the first and most important step in securing a more permanent spot on the Tour. From that moment on, I trained harder and pushed myself further. I knew the competition wasn’t going to be easy, as I was going up against the top sailors from around the world, but I was determined to give Alaçati everything I had. 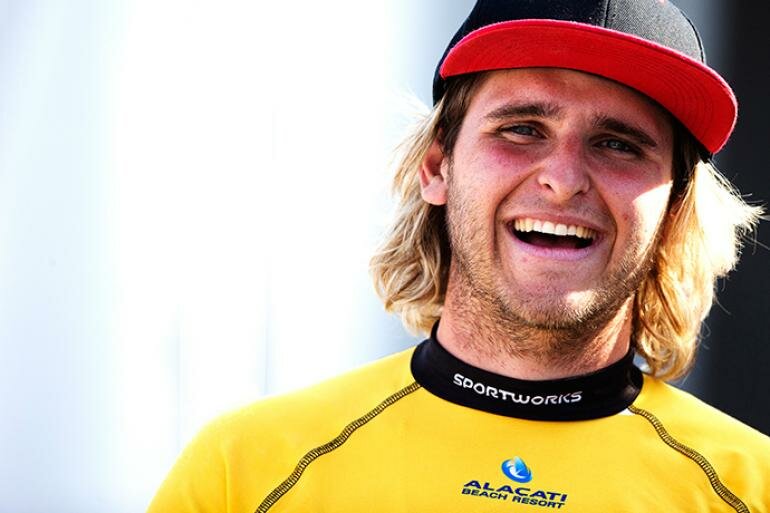 Theo Naude, a good friend of mine, helped me with my training, which involved a multi-faceted CrossFit workout plan. This gruelling training programme taught me a lot about discipline and self-motivation, and that your body can handle much more than you think, thus enabling you to push on through when you feel you can't. I also had a great Marketing Manager, Lizanne Pia van Niekerk, and last, but definitely not the least, a very proud and determined father, who has always believed in me and knew that one day I would qualify for the PWA World Tour.

Departure day finally arrived and luckily for me, getting all my kit to Alaçati wasn’t as much of a hassle as I thought it would be. Turkish Airlines really came to the party and helped me with some excess baggage allowance, so I was able to take all the kit I would need. This included two boards; a 107 and a 117 Starboard Isonic, the latter was lent to me by a good friend of mine, Peter Lumley, as it was predicted that the wind would be really light at about 7 to 12 knots. I also took two booms and four Evo 5 RS racing sails, which only arrived the day before I had to leave for Turkey. Finally, I carried double of each mast I would need, which was a 400, 430, 460, and 1,490.

With my luggage taken care of, I boarded the plane, settled in and was ready to enjoy the 14-hour flight from Cape Town to Alaçati, with a stopover in Istanbul. However, my relaxed state turned to panic when I missed the connecting flight due to my flight arriving late and the ensuing mass confusion around which gate I had to get to. To my great relief, I was able to catch the next flight out. Alaçati here I come!

Arriving two days before the event started, another huge relief for me came in the form of a kit tent. You see, when I first got to the event site, it looked like all the tents had been used to store kit in. I was not overly concerned, as I knew that I could probably shack up with some friends of mine that were also on the tour. But I was totally blown away when Antoine Albeau, the reigning World Champion and proud owner of at least 20 different world titles, came to me and said, and I quote, "Mitch do you have a tent? If not, I kept this one for you." The tent was right next to his and it was probably the third-best type of tent available. It also had clear access to the water, which was only about 10 m away. Oh, and did I mention that it had carpeting? Man, I felt like a king.

Come race day, I was feeling somewhat nervous for the first race. I had heard from some of the other guys how the heats worked and seen a few heats on the live stream, but nothing could really prepare me for how it felt to line up with some of my sailing heroes. It was my first-ever international race and I was going up against legends the likes of Josh Angulo, Micah Buzianis, Bjorn Dunkerbeck and, of course, Antoine himself. These guys have been sailing competitively since before I was born, and they have the skill and experience to match all those years of sailing.

There were 64 competitors taking part in the six days of competition, so the heats went quickly and only the top four from each heat progressed through to the next round. What also helped the rounds to move at such a fast pace was the excellent organisation. As soon as one heat was heading for the first gybe buoy, the next heat was lining up for their start sequence. Counting down the seconds to the start of my race, I grew increasingly nervous and tense because the starts are very, very strict. If anyone is over by a fraction, the perpetrator is eliminated from the race and given the least amount of points possible. Then the judges do what's called a general recall and restart the race, but in a different heat order as there is one less man.

I started sailing as I waited for the buzzer to sound the start of the race. Ten seconds went by and I was sailing at full power towards the line. I realised that I was about a second too early, so I applied the brakes to slow down. At that moment, I heard the buzzer explode into life and noticed that I was about two seconds off the leading guys. As Cederic Bordez flew around me, he rolled me. He had sailed so close to me upwind that he sucked the wind from my sails, making it hard for me to maintain speed. I was now battling it out with Luke Bailey, from Australia, for sixth place. Each time working harder and harder in and out the gibes, to get as much speed as possible in the beginning. This is key to a fast race and overtaking people because the further down the down-wind course you are, the less wind there is. In addition, the entrance to each vibe buoy is manned by an official who monitors the wind, to make sure it doesn't drop below 7 knots. If this happens or three or more riders stop sailing for over three or four seconds, the chequered flag is raised to signal that the race is cancelled due to a lack of wind on the course. 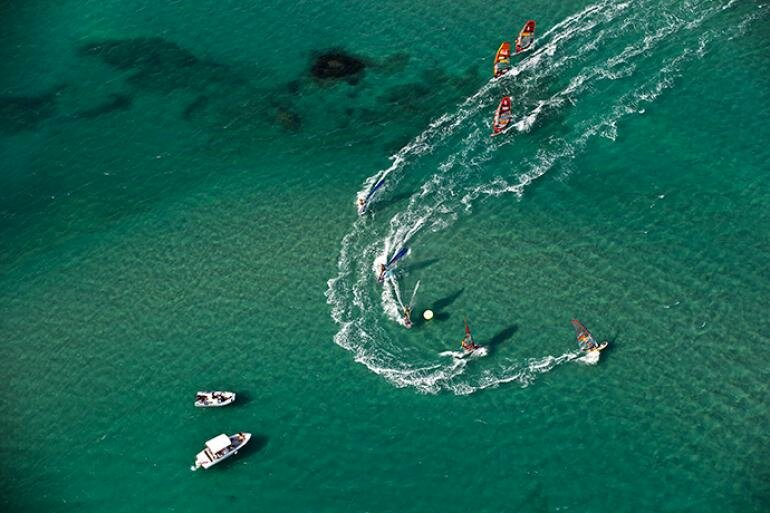 Throughout the competition, the wind remained above 7 knots, but the conditions were challenging compared to Cape Town, which has much stronger winds. Normally on a windy day, we expect about 18 to 25 knots. In Alaçati, there was only ever 7 to 12 knots, but it was very constant. Most of the racers were well prepared for these conditions, as they had trained in light winds with big 127 boards and 9.5 sails, whereas I am used to being at full power with a 7.8 sail and my 107 board.

By the end of the race, my arms were throbbing from gripping the boom so hard and pumping at every mark. I achieved 59th place overall in the competition, not a bad result considering it was my first event. I have also secured an opening for the next year’s PWA events and managed to open a door to future events. I would really love to go to Korea and Costa Brava, but that’s going to take a lot more training, as well as additional training with the international Pro’s that come to train in South Africa during the summer.

When I wasn't racing, I visited the live-stream tent and shared the commentary box with a good friend of mine, Ben Profit. We spoke a lot about Cape Town, cheered the sailors on, and answered questions. It was a lot of run and I really enjoyed it.

As quickly as it all began, it was all over. With most of the riders leaving the following day, bags were packed as soon as the last race was finished and piled up in different groups, depending on what time you left. Some riders had three bags, while others had as many as fourteen. So I didn't feel too bad with my two extremely large kit bags.

I would have to say that one of the big highlights of this event was getting to know all the riders and the team that runs the event. My advice to anyone that makes it onto the Tour is to make friends and put yourself out there; be open, chat, and mingle because it makes the whole experience that much more enjoyable. And if you ever need some help, there’ll always be someone you can count on.

Events to look out for

The Nationals are coming up and take place all around the country in very different conditions. The first event is taking place at Sterkfontein, just outside of Bloemfontein, from 21 to 24 September 2013. The next event is in Port Elizabeth, from 29 November to 1 December 2013. The last event is in Cape Town and runs from 24 to 26 January 2014.

For more information about the PWA World Tour, visit www.pwaworldtour.com 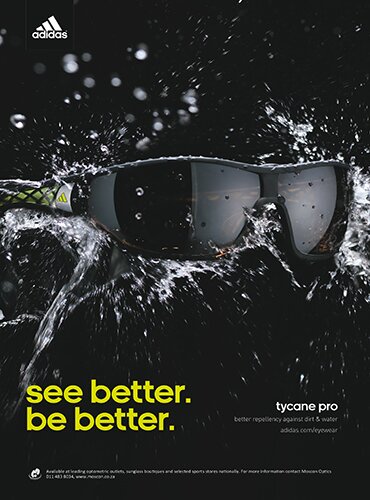