The Dusi Umgeni Conservation Trust (DUCT) last week laid out a rope on Inanda Dam in an attempt to cordon off the abundant water hyacinth but in the past few days it seems that large sections of this rope have been stolen which has left DUCT Field Manager Bart Fokkens and his team with a lot of cleaning up to do with the iconic Dusi Canoe Marathon just a week away. 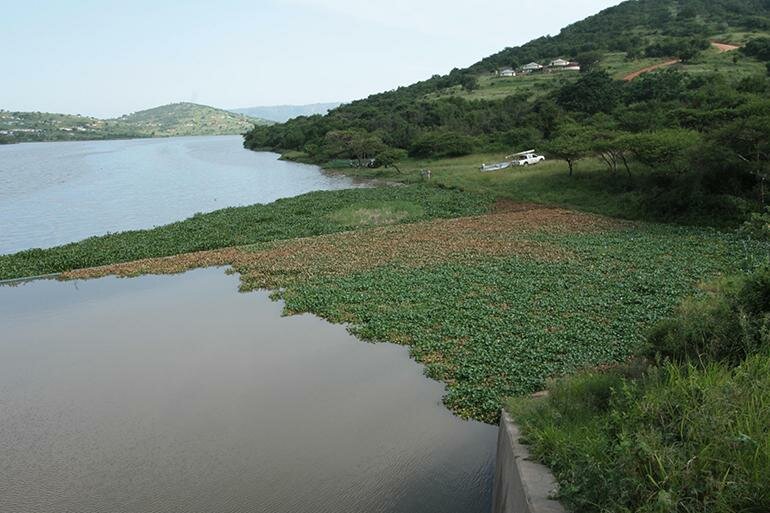 It has been a tough few months for Fokkens who has been in the process of trying to curb the impact that the hyacinth has had both on the environment as well as on the prestigious race that starts at Camps Drift on 13 February and, with the initial plan having now been sabotaged, quick thinking will be the key to him rectifying the matter with the race right around the corner.

“It is really disheartening when a plan comes together but it is harmed by people trying to make quick money,” a frustrated Fokkens said. “We were down here over the weekend spraying the area that we had cordoned off but now we have to try something different because if we use another rope it will just get stolen again!”

With only about 20 metres of rope left from the approximately one kilometre that they started with, the DUCT team are now under pressure to make sure that the invasive aquatic plant does not have an impact on the race when the paddlers look to head onto Inanda Dam at the end of the second day of the race.

“We are going to do a little bit of experimenting now to see what will be the most effective way of getting rid of the plant but for the race we are just going to have to create a channel on the south bank that the paddlers can paddle through instead of trying to completely destroy it in a week!

“The one positive for us at the moment is that the weevil population on the green hyacinth is growing so if the race was at the end of March there would be no hyacinth on the water at all!” Fokkens mentioned light-heartedly.

Hyacinth is a problem along stretches of the Dusi route and there has been a major effort by DUCT and other bodies to get rid of as much of the water lettuce as possible in the build up to the Dusi. The DUCT squad have even called in the heavy artillery with a helicopter being used to spray the worst affected regions recently.

“It is a massive area for us to cover and we can’t cover it all by foot or by car so we called in a helicopter to spray the section from the Confluence to Ngumeni Hill.

“We have not checked the effect of the helicopter spray because we have been busy on the dam trying to just keep this under control for the race.

“The boom that is permanently set up on the dam does help in containing the hyacinth to a certain degree as it all gets pushed into the boom overnight with the winds blowing downstream and we can manage that when it happens,” he added.

It has been a tough battle for Fokkens but he hopes that with the help of Umgeni Water and the Durban Green Corridor the hyacinth should not play any detrimental role in the race starting next week.

“Although we have hit quite a snag with our rope being stolen we are still confident that the problem is under control heading into the race next week.

“It will take a bit more work from us but we will be able to get it all done by the time the paddlers get to the dam at the end of day two,” Fokkens concluded confidently.