Welcome to the world of South African cable wakeboarding and wakeskating. 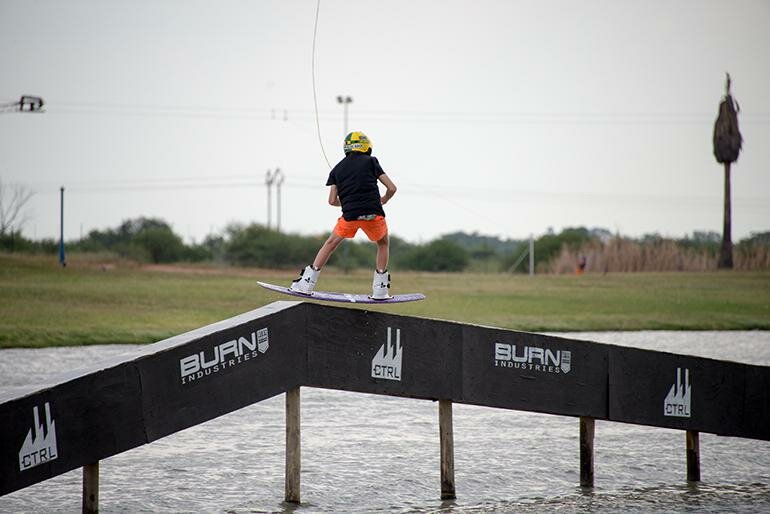 Photo credit: DO IT NOW Media

With eyes set on the world championships to be held at Telemark cable in Norway, from the 8th to the 17th of August 2014, the competition proved to be tough as everyone took to the water at the first pro stop of the season. This was successfully held at Forever Resorts in Warmbaths over the weekend of the 25th and 26th of January.

It was decided that both the qualification rounds and finals were to be held over one day on the Saturday, so that we were able to have some fun competitions on Sunday to promote the sport and inspire the passions of the riders. Most people arrived at the resort on the Friday to make use of the afternoon's practice session for the competition. With all preparations having been covered we had the night to socialise and rest before going big the next day.

The rider's briefing commenced at 08:00 on Saturday morning. This is where we explain exactly how the day's proceedings will unfold, as well as clarify any confusion with regards to the competition runs and rules. Once all competitors had been briefed, it was time to ride. Starting with the Novice division and working right up to the Professional divisions, we constantly had something happening on the water. As people landed their tricks and finished their runs, the excitement built amongst the crowds and supporters. Everybody rode well and the competition was tight, as many of the riders work to secure their places on the South African team. The comps are all runs upon a points system, through which the most consistent and impressive athletes may easily be determined.

As the evening approached, we crowned our champions of the first stop and relaxed for the party and buffet dinner at the cable. The top three Pro Ladies finished with Melissa Colborne in 1st, Candice Bacon a close 2nd and Deidre van Niekerk securing her place in 3rd. The Pro Men showed the S.A. Champ, Justin Mitri clenching the top spot, with Sinjon Phillips in 2nd and Justin Selby earning 3rd. In the Wakeskate Pro Men Gold went to Mattie Buys, Silver to Kaylib Louw and the Bronze to Jacques Labuschagne. Congratulations must go to all of the winners on their impressive performances.

Sunday morning arrived after a night of celebration with close friends and we were all jumping to enter the fun competitions. There were three competitions for anybody who wished to enter at a R50 charge per event. These were namely a wakeskating game of consistency, known as the game of Sk8, a wakeboarding rail sliding comp and a wakeboarding big air comp.

Mattie Buys won the game of Sk8, Jacques Labuschagne owned it on the rails and Justin Mitri went huge to claim the big air win. With all respective entree fees being allocated to the winner of each of the events, it was good to see how the wakeskaters all decided to dedicate their winning contributions to Darren Turner, who was unable to enter the weekend's events due to having broken his toe whilst practising just two days prior to the stop. We all wish Darren a speedy recovery.

One last spontanious event occurred as some guys, who had tried to land a double s-bend earlier on in the day, motivated that the big air riders also try to land the double s. For those of you new to the sport, a double s-bend is the trick whereby the wakeboarder floats straight through the air on a loaded air, so that they look like Superman flying above the water with his arms extended forwards, and then they must spin around twice before pulling their body back in to land on the board once again. Having injured himself on this very trick a few years back, Justin Mitri was brave enough to attempt it first. Being such a good rider, he landed it and immediately I was motivated to try a double s-bend as well and so quickly made my way to the water. One of the riders, CTRL Wakeboards and Do It Now Magazine brought their support and upped the stakes by sponsoring a cash prize of R10 000 for the next person who could land the same trick, as nobody else there had stuck the double s-bend in competition before that day. Without even realising that there was money on the line, i turned around the corner of the cable and went straight into my attempt at spinning over twice. To my surprise, i landed cleanly back on the water and then thought that Zane was joking by announcing me having just won the money. Wow, it's a blessing just to land a clean double s-bend for the first time! Therefore the additional cash reward is truly amazing, considering how it does accurately depict the worth of the sports to us, as riders, who are just doing what we love. A personal shout out and thank you to the sponsors of the prize for bringing the love and motivating the riders.

Thank you to all the sponsors, CTRL Wakeboards, Burn Industries, Rockstar Energy Drink, Forever Resorts, Skull Candy, Do It Now Magazine and Samsung, the event organisers, judges, commentators and crowds for always being on top of the ball and making the entire weekend an amazing and energised experience. Very well done to everybody!

As we continue to focus on training with and selecting the S.A. Team, we now look forward to performing well at the next competition expected soon at Blue Rock Cable in Somerset West. May all competitors land those tricks that they are currently solidly working towards getting consistent. All the best and see you in Cape Town for Stop 2!