Green light for stand up paddleboarders to make Dusi history

The Dusi Canoe Marathon organisers have given the green light to four stand up paddleboarders to enter the 2014 race, making history as the first SUP competitors to embark on the tough three day paddling race from Camps Drift to Blue Lagoon. 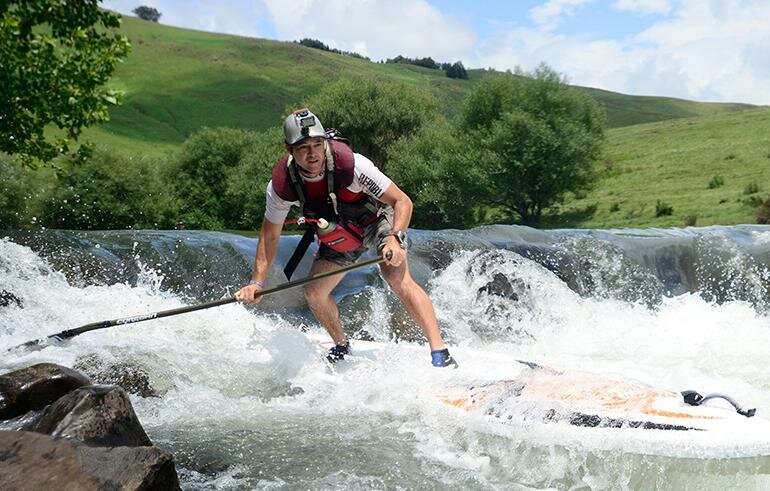 Three local adventurers, Dean Bottcher, Brendon Germaine and Jon Ivins will be joined by US based Corran Addison. They will now be allowed to enter the race after satisfying the race organisers that they can safely complete the race without interfering with the other crews.

Germaine designed a special river SUP, which the three local paddlers have been using in a number of the build-up canoeing races this summer leading up to the Dusi Marathon.

They recently impressed even their most stubborn critics by finishing the tough two-day N3TC Drak Challenge in demanding low water conditions in Underberg.

Dusi General Manager Brett Austen-Smith confirmed that the race committee had noted the results of the three SUP paddlers during the early season Dusi qualifiers and the Drak Challenge, and said they had been impressed by their achievements in a wide variety of river conditions and flatwater races.

“These guys have proved the legitimacy of stand up paddleboarding, and we are happy that they can now enter the Dusi, provided that they complete the last two qualifying races, the Campbell’s to Dusi Bridge and the Inanda Dam to Durban races,” said Austen-Smith.
Austen-Smith also confirmed that the SUP paddlers would be classified as “touring class” paddlers, and would be batched according to the fastest of three local SUP entries.

“If there is no other entry in the “Touring Class” category at Dusi, we will consider awarding this trophy to the fastest SUP,” he added.

Addison will jet in from the US to join the pioneering local trio. It was Addison who caught the attention of the Dusi audience last year when he rode his SUP through the big waters of Island Two Rapid on the final day of the Dusi, after which the idea of taking on the entire 120km course seriously took root.
“We were so chuffed to get the email from the Dusi committee saying that we can enter,” said Ivins, who was the last to join the quartet of SUP entrants.

“I did my tenth Dusi last year and I really wasn’t thinking about keeping on doing the Dusi. Then I heard about these two local guys aiming to do the Dusi on SUPs, and they weren’t even regular SUP riders. I just had to be part of it,” he said.

“The part that we are really not looking forward to is the flatwater sections, and in particular that long pull across Inanda dam at the end of Day Two. By the time we get there, there will almost certainly be a pumping headwind, so it will be tough, very tough,” said Ivins.
“I guess the Dusi is the least likely race to do on a SUP with its flatwater and long portages, but that is what makes it a challenge,” he added.

The specially designed river SUP boards made for the Dusi will weigh about 16kgs, and will be long and unwieldy craft to carry on the long portages.

“On the river we really handle the big white water,” explained Ivins. “If we do come off, then we simply climb back on and carry on, which is a real advantage over normal canoes.”

“It is contact with the rocks that we have to watch out for because if you hit a rock you aren’t expecting you tend to fall forward onto the front of your board, or straight into the water,” said Ivins.

“Make no mistake, doing the Dusi on a SUP is a big ask, but we think it is do-able,” Ivins concluded.