Wearing Burry Stander's jersey, Max Knox (Specialized) went on to win the MTN Barberton ultra-marathon mountain bike race for a record fourth time on Saturday 26 January. In a dramatic finish, Knox slowed down as he entered the stadium and pointed one finger up to the sky in a salute to Stander, who was tragically killed by a taxi on a training ride earlier this year. Knox made it clear that his sole motivation was to ride a good race in honour of Stander. 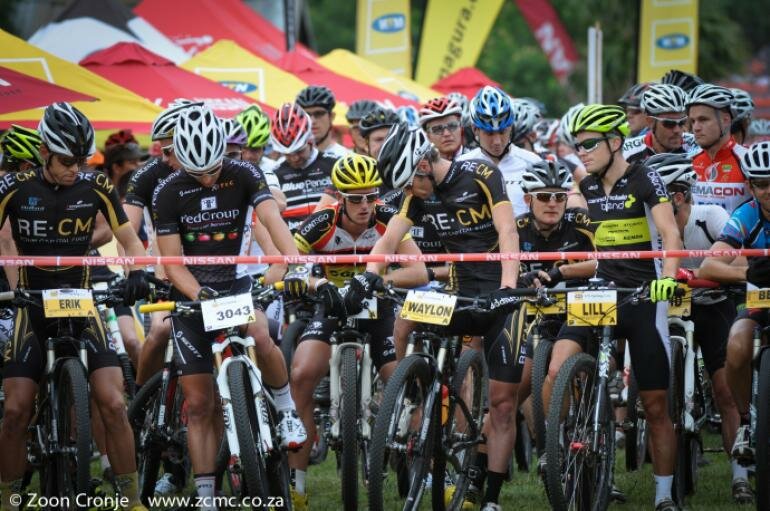 In the MTN Marathon race for the women it was not only a case of Olympian versus Olympian, but also of mountain biker versus road cyclist. In the end there were no surprises! Candice Neethling (BMC), the Olympic cross-country mountain biker, prevailed. She won the 70 km race in 3:35:56. Robyn de Groot, who represented South Africa in road cycling at the Olympic Games in London last year, was second in 3:36:01.

A true champion is somebody who can keep his cool when things go slightly awry. And Dylan Rebello (Jeep) did just that when he won the Nissan National Half-marathon over 40 km at Barberton. In spite of losing about three minutes as a result of having to stop to fix a mechanical problem, and then landing flat on his face after taking a flyer, Rebello won in a time of 2:06:39.

Spectators at the finish would have noticed that Knox rode in a Specialized jersey with Stander’s name emblazoned on the back, and there's an interesting story behind this. When Knox signed up to ride for Specialized, he did not have any kit at first and Stander gave him one of his jerseys. This was the jersey in which Knox won the Barberton Ultra-marathon. Said Knox, “Burry was a sporting icon in South Africa, as well as a good friend and respected rival against whom I raced a lot over the past 15 years. When I won the South African Marathon title last year, Burry was one of the first to congratulate me. He also made it very clear that to be a South African Champion comes with a great deal of responsibility.

Burry’s advice to me was, "When you wear the National Champion’s jersey, you have to race in a way that does justice to it." That is what I tried to do on Saturday. Naturally, being a born and bred Lowvelder, it is always important to me to win when I am racing in front of my own people.”

The race was a classic duel between Knox and Matthys Beukes (Contego). It began during the second lap when Knox attacked at the beginning of the last serious climb. Beukes was the only rider who was able to take on Knox, turning the race into a thrilling contest. Beukes was slightly stronger on the climb, managing to stay about 10 seconds ahead of Knox, but going downhill Knox attacked and regained the lead. Unfortunately for Beukes, he ‘bonked’ with about 5 kilometres to go. “Maybe it happened because I did not eat enough during the race. I simply had nothing left in my legs. All I could do was pray that nobody would pass me during the last few kilometres,” Beukes said. Luckily nobody did. Knox said he was sorry that Beukes ‘bonked’. “I feel sorry for Matthys because he really deserved to win. I think if the race went down to a sprint, he had more than a good chance of beating me. But that is mountain biking. I also really wanted to win.”4

Knox’s record in Barberton is quite impressive. In the five years since it has become an ultra-marathon, he has won on four occasions. The second place finish of Beukes came as a bit of a surprise, especially because his focus was mainly on cross-country racing during previous seasons. 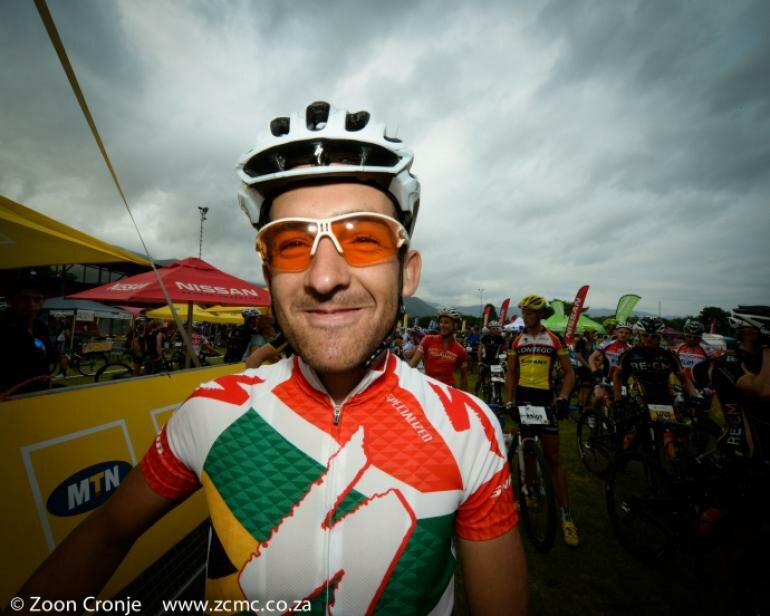 It was exciting to notice on Saturday that, for the first time in years, the race was not dominated by the same riders. Riders who impressed were Keey and Darren Lill (both Cannondale/Blend Properties), Erik Kleinhans, Lourens Luus and Waylon Woolcock (all RE:CM), as well as Rourke Croeser (Kargo / Orange Monkey). Kleinhans is definitely stronger and fitter than he ever was. On Saturday, however, he was extremely unlucky. It looked like a foregone conclusion that he would finish third but, when it mattered most, he was brought to a standstill by mechanical problems. Lill impressed on the first climb. He attacked seconds after Knox complained about the negative racing, as it seemed as if everybody was just racing against Knox, waiting for him to do something. Lill managed to obtain a lead of about two minutes on Beukes and Philip Buys (Scott), and another two minutes on the rest of the riders. Unfortunately he also ended up a victim of mechanical problems. The 21-year-old Luus, who had been second at Attakwas, proved his consistency in ultra races by coming fourth at Barberton.

There is only one way to describe De Groot’s performance on Saturday and that is with the word ‘impressive’, because the MTN Barberton race was her first serious attempt at mountain bike racing. “I did my first mountain bike race just before Christmas last year, but it was basically just a comfortable 55 km fun ride on the Garden Route. My decision to race at Barberton was really taken on the spur of the moment,” De Groot said. Britain’s Catherine Williamson and Ischen Stopforth were third and fourth respectively in the same time of 3:39:12. The two Specialized riders gave the impression that they were just on a good, hard training ride for the Cape Epic. Ariane Kleinhans (RE:CM) was certainly the unluckiest rider on the day. Coming from her recent victory at the Attakwas, she attacked on the first serious climb of the Barberton race and managed to ride away from all her rivals.

But on Saturday victory was not meant to be for her. Only a few kilometres further on, mechanical problems brought her attempt at Barberton to secure two consecutive victories to an abrupt halt. Neethling then took the lead, with De Groot catching up later on during the race. The two of them became involved in a ding-dong battle. Neethling managed to open up small gaps on the technical sections, but De Groot clawed her way back on the climbs. In the end, when it really mattered, Neethling was just that little bit more experienced and stronger. This was Neethling’s second victory in the MTN Series. Last year she won at Hilton. According to Neethling, she plans to race the MTN Sabie, and maybe Clarens as well, before shifting her focus back to cross-country racing. “My main goal for the season is definitely to be at my best for the World Cross-country Championship in August, in Pietermaritzburg,” said Neethling.

De Groot said she thoroughly enjoyed herself on Saturday. “I will definitely compete in more mountain biking events from now on.” What was surprising about De Groot’s mountain biking début was her strength going up the climbs. Only Kleinhans and Neethling were able to beat her to the top of the steepest climb. As a road cyclist, De Groot is considered to be a sprinter who is also able to climb if the need should arise. Adds De Groot, “Coming from a road cycling background certainly helped. What should be remembered is that team tactics are important in road cycling. If your team’s climber gets away on a climb, you don’t chase her down. That is why I am seldom very aggressive in the mountain stages of tour cycling.” De Groot admits that she did suffer on the Barberton climbs. “At one stage the climb felt never ending. Going downhill was fun, but I experienced some scary moments.”

Rebello, who was overall runner-up in last year’s Nissan Series, continued his winning streak by winning at Barberton. He was also the overall winner at The Cycle Fest.

“Winning at Barberton is certainly a confidence booster. The challenge now is to ensure that I continue to peak at the important races.”

Rebello had an impressive start and immediately took the lead. Going up the big climb, he performed like a ‘machine’, basically increasing his lead with each pedal stroke. “When I started the descent, I purposely took things slightly easier and made sure not to take any unnecessary risks. In spite of this, I still had bad luck. The chain of my mountain bike got stuck in the front derailleur and it took me approximately three minutes to get going again. This enabled Wagner to catch up with me, making for some tough racing because he managed to stick right onto my wheel. Being so close together meant that there was no room for any mistakes. As luck would have it, we came to quite a steep drop-off with a sharp left hand corner at the bottom. Because we were racing at such a high speed, we were unable to slow down in time and were both sent flying into the bushes. I hit the ground face first, but there was no time to worry about that. I just got back onto my feet, dusted myself off and continued racing. Remarkably I still had a lot of energy left after the crash. I therefore decided that ‘this was it’ and gave my all to ride away from Wagner.” It was only after the race that Rebello realised how hard he had crashed.

“The right side of my face was slightly swollen and the next day I had a headache. I think I was probably somewhat concussed,” he said on the Sunday after the race.

However, Rebello fully realises that to be a winner in mountain biking you sometimes need to be prepared to take one or two hard knocks on the way to victory. Two days later he already had forgotten about his crash in Barberton. All that mattered to the youngster from Johannesburg was to be back on his mountain bike and do some serious training, as it is important to him to try and get another good result at Sabie on 23 February.