Pietermaritzburg – Missing for more than four decades, the original Player Family Trophy presented to the winner of the Dusi Canoe Marathon has been found and reunited with its inaugural winner, Dr Ian Player. 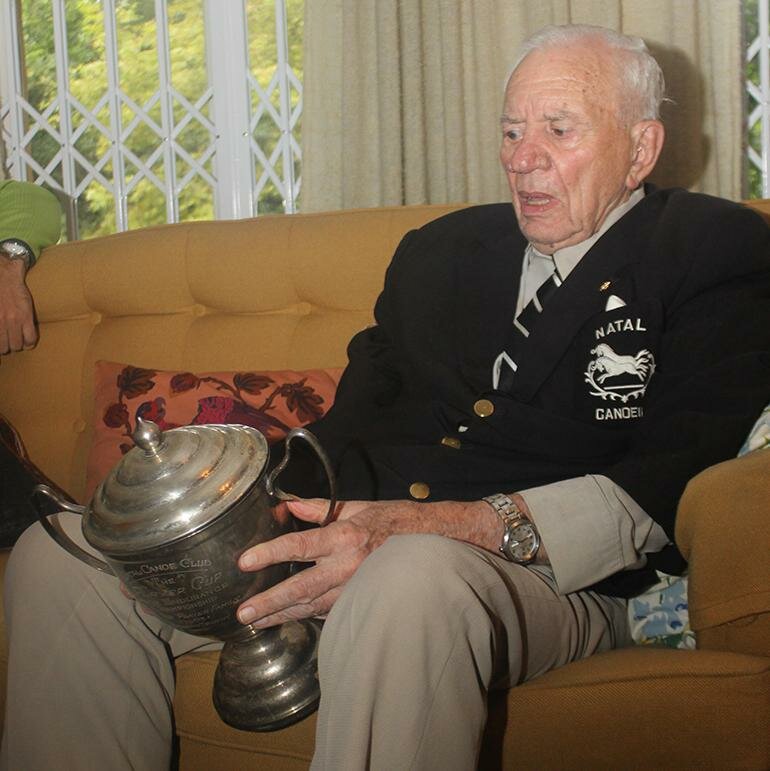 The 86 year old environmentalist and founder of the Dusi Canoe Marathon was delighted to be reacquainted with the trophy, which was presented to the race by his father and his famous golfing brother Gary Player in 1953.

The trophy, inscribed as the Player Canoe Endurance Championship, mysteriously disappeared in 1972, after which the race committee purchased a new trophy which has been awarded every year since then.

The original trophy was discovered in a dark corner of a storeroom during the recent move into the refurbished race offices at Natal Canoe Club's home at Camps Drift.

"This is a wonderful occasion," said Dr Ian Player when he was handed the trophy at his Karkloof home this week. "There is so much history wrapped up in the this trophy, and so many great personalities."

His eyes lit up when he read the 1954 inscription on the trophy that showed that he and his partner Fred Schmidt sharing the title with Ernie Pearce and Bob Templeton.

"That was a fantastic race!" he recalls. "Two youngsters (Peter Marriott and John Lange) were actually leading as we came out of the Kloof Gorge, but they had a mishap, and that left our two teams together going into Blue Lagoon."

"It had been so close throughout the race that we actually decided that it was appropriate that we finish together and share the trophy.
"That, in essence is what the Dusi is all about. From the first time I thought about this race, in Italy during World War Two, it was more about cameraderie than competition," said Player.
Player said the Dusi was a mirror for the greater issues challenging the broader society, and highlighted issues such as deteriorating water quality, environmental damage, urban pollution and the threats to flora and fauna.
"I would love nothing more than to see the streets of Pietermaritzburg clean when I come down to the start of the Dusi this year," said Player. "Durban is getting it right, but Pietermaritzburg needs to make a bigger effort to clean up the city."
He said that in its early days he expected candidates keen to work at the Parks Board to complete the Dusi as part of their induction to his environmental programmes.

The race committee will have the original trophy cleaned and then inscribed with the names of all the winners since its disappearance in 1972.

"We genuinely have no idea where the trophy went," said race committee head Brett Austen-Smith. It was won by the Van Riet brothers from the Cape in 1972 and then literally vanished.
"Similarly we don't really know how it came to find its way back to the old store room that we were repacking. We were actually looking for a larger, more appropriate trophy for the women's winners when we discovered the original Players Family trophy in the storeroom.