DAKAR RALLY UPDATE: Sam Sunderland gets the first victory in the Dakar

After the win yesterday for Joan Barreda, today it was the turn of Sam Sunderland to take the stage victory. The British rider was a worthy winner of the Dakar’s second special, where the Honda CRF450 RALLY remains in top positions and where Joan Barreda continues to command the leader-board. 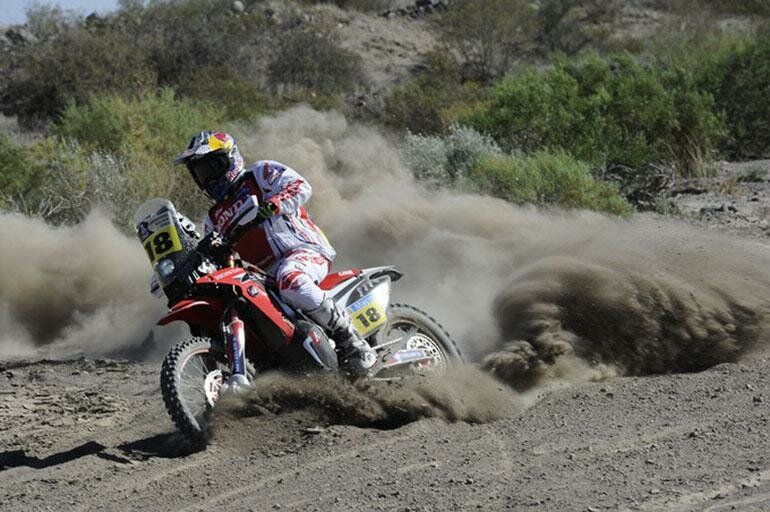 The second stage of the Rally Dakar brought the riders from San Luís to San Rafael, taking in a total of 354 km against the clock, and including a range of diverse terrain types; hard ground, rocks and even some 70 km of navigation through the challenging dunes of Nihuil.

What a stage victory it was for Sam Sunderland too! The British rider, who clocked up the stage’s fastest times, seemed particularly at ease, especially in the second half of the day, when he was able to prove his deft handling skills in the dunes. The result, his first victory in the Dakar, puts Sunderland up into third overall position.

Joan Barreda was first away today and in his usual style, put pedal to the metal, and completed an almost hitch-free stage to continue to widen the deficit over his rivals in the overall standings. Barreda managed to hit a cow which was blocking the way and the impact broke the roadbook, forcing him to use it manually. In spite of this Barreda powered on to consolidate his place at the head of the leader-board.

Paulo Gonçalves, determined to finish among the leaders, was running a fine stage until a problem with the gasoline’s vapor lock held him up and forced him back to an eight place finish. The Portuguese rider is now seventh in the overall standings.

Hélder Rodrigues finished in fifteenth place, and Javier Pizzolito, who fell in the dunes, was able to finish in twenty-first place.

After an excellent performance yesterday, the riders that Honda supports through Honda Brasil and Honda Argentina today saw positive results for Jean Azevedo, Laia Sanz and Cacha Rodríguez, all on the new Honda CRF450 RALLY. All of them were up in the first thirty places. De Azevedo is 23rd overall, Laia Sanz holds 26th place and Pablo Rodríguez is in 29th.

Sam Sunderland | 1st | 3:42'10 | TEAM HRC
I’m really happy. The bike was fantastic, it’s been a great day with a mixture of different terrains, speed and technical zones. We got to the dunes which I get on really well with. It wasn’t a really long stretch, but it went well. I crossed the river which was deeper than I had expected, which got a few laughs out of the folk. But I’m really pleased for my first Dakar victory and to continue Honda’s winning streak.

Joan Barreda | 3rd | +02'00 | TEAM HRC
I knew that it was going to be a day to be on the look-out for animals. When I was about 70 km away from the finish-line, with the big hazards out of the way and the navigation through the dunes completed, I crossed a river with low-visibility and came across a cow on the curve. I tried to avoid it, but it came running out and I ran into it. It wasn’t a great impact, but it broke the higher part of the navigation, and I had to work the roadbook manually. The first part was really speedy and I was opening a gap over the rivals. From kilometre 250 to 300 I had to stay really focused, which I’m very happy with.

Paulo Goncalves | 8th | +07'45 | TEAM HRC
It was a really hard day’s rally. I had a couple of issues with the gas in the dunes and I lost a bit of time. It could have been a better day, but what the heck... I managed to finish and that’s the most important thing. Tomorrow we start out from good positions so the fight will go on.

Javier Pizzolito | 21th | +21'22 | TEAM HRC
It was a beautiful stage, with a lot of kilometres and much dust. I went off with Hélder, and tried to push hard. I made a slight navigational error and I fell, which was worse for the bike than for me, as I’m fine. It could have gone better for me today, but considering I made it, I’m happy.

The Aconcagua as a landmark
The competitors of the 2014 Dakar will experience their first taste of the mountains by passing through the Pre-Andes. The Aconcagua Volcano stands 6,962m high and will observe the progress of the vehicles, of which a part will rehearse their high mountain driving techniques. The motorcyclists will climb up 4,300 metres during their special stage, on a ridgeline where they will have the impression of towering over the whole of America ! The descent will bring them back to the tough reality of the riders of the Dakar, as they will only have finished the first part of this marathon stage. They will have to ensure the mechanics for their own vehicles at the isolated bivouac which has been set up for them.