The Coca-Cola Dome was abuzz with excitement as the crowd eagerly awaited the appearance of the GRAMMY award-winning musician and songwriter, Kenny G, for his one-night-only concert, which took place on Thursday, 20 November 2014. 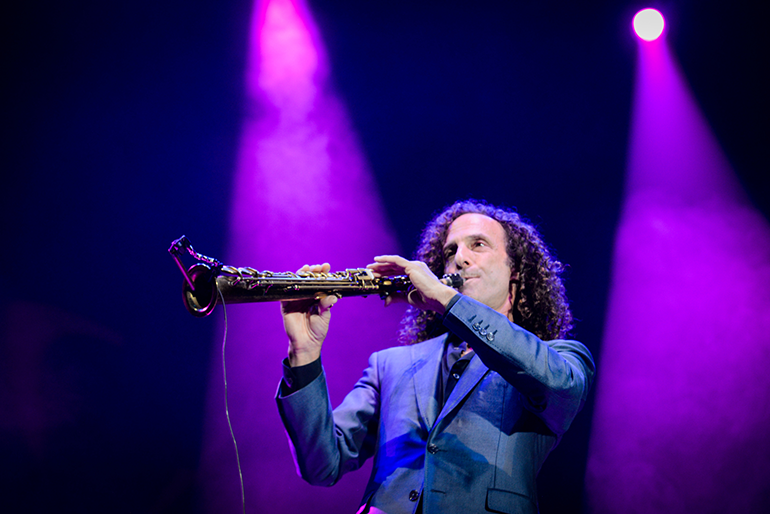 Presented by Canoc Productions in association with Mzansi Magic Music and 702, the evening opened with South Africa’s very own jazz master, Selaelo Selota. With a career in music spanning over 20 years, this multi-talented producer and composer has recorded and produced six award-winning albums.

Selota has an association with Kenny G through the title track of Judith Sephuma’s debut album A Cry, A Smile, A Dance, which Selota composed and arranged. Judith Sephuma received international acclaim after this track on the album by the same name was featured in Kenny G’s album At Last... The Duets, which is a mix of instrumental Jazz and romantic ballads sung by well-known divas with a few pop songs sprinkled in-between.

And then Kenny G made his appearance - and what an appearance it was! Making his way across floor, the crowd quickly clambered to their feet and stood on their chairs when they realised who it was, trying to catch a glimpse of the legendary saxophonist. The hauntingly beautiful sound of his sax held everyone totally captivated and mesmerized, and it is easy to understand, and appreciate, why he is one of the most popular instrumental musicians in history.

After performing a few of his greatest hits among his delighted fans, he then held a note as he made his way up onto the stage and continued for what seemed an eternity. Wow, wow, wow. Even more impressive is the fact that Kenny G holds the 1997 Guinness Book of World Records mark for playing the longest note ever recorded on a saxophone. At a performance at J&R Music World in New York City, he employed a method called circular breathing to hold an E-flat for 45 minutes and 47 seconds.

Kenny G continued to 'blow' the audience away when he welcomed everyone - in Afrikaans and Zulu, and not just a few words either, full-on sentences. Well, from that moment onwards, he had the crowd in the palm of his hand.

Then just when you thought the evening couldn't get any better, we were treated to the most incredible solo performances by each of his band members. They were riveting! Their energy, their passion, their skill - it all made for one phenomenal performance. But the cherry on top was Kenny G playing a duet with Louis Armstrong [a recording on the big screen] to the song of "It's a wonderful world". Now that performance is something I am confident every person in the audience will remember for the rest of their life. I know I definitely will, and I still get goosies thinking about it. Check out the video: https://www.youtube.com/watch?v=XXG0CnrbMGY.

Although this was a one-concert-only performance, fans can look forward to the release of his fourteenth studio album, Brazilian Nights, set for release on 27 January 2015 via Concord Records.

Starting with melodious sounds of "Bossa Antigua", the ten-song set is a mixture of classics and Kenny G originals. Writing five of the ten tracks with long-time collaborator (and co-producer) Walter Afanasieff, the veteran performer plays alto, tenor and soprano sax and dazzles on such cuts as "Bossa Real", the gently pulsating "April Rain", and the relaxed yet dramatic flair of the title cut.

He admits that he took his time making Brazilian Nights, as he wanted to immerse himself into the light and melodic sounds of music from across the globe. "I spent a year and a half studying and the style of the bossa novas from decades ago. I had fun and learned a lot during my "wonderful labor of love" and I truly hope you get the same pleasure from this album that I have experienced when I sit down after a long day and put on my bossa nova sounds. Words can’t describe that feeling, but hopefully the melodies that I've played here will."
Download track “Bossa Real”: https://www.dropbox.com/s/5ugymvbubgqyl04/03%20Bossa%20Real.mp3.zip?n=47...

Born Kenneth Bruce Gorelick on 5 June 1956, in Seattle, Washington, in 1956, saxophonist Kenny G began playing professionally at the age of 17, when he performed with Barry White and his Love Unlimited Orchestra.

Since then, Kenny G has had one of the most eclectic and dominant careers the music business has ever seen. He’s maintained a high level of creative excellence through decades of unprecedented commercial success by never allowing himself to stay in one place too long. That reputation for musical curiosity stays well intact on his newest album.

“I’ve been in love with bossa nova my whole life,” says the saxophonist in the album’s liner notes. “I think the first song that ‘won me over’ was Cannonball Adderley’s version of "Quiet Nights".

And more recently I’ve been listening (non-stop!) to Stan Getz’s album called Getz For Lovers. I think I've listened to that record almost every day for the past five years and it really was the inspiration in making this album. My goal was not only to make a bossa nova album that pays tribute to the "Masters" who I’ve been listening to (Cannonball Adderley, Paul Desmond and Stan Getz) but also to write and record original bossa novas that I hope can ‘hold their own’ in this distinguished company. I humbly say that I feel we’ve succeeded.”

Melodies and music have long been a signature part of Kenny G’s life. Since releasing his self-titled debut disc in the fall of 1982, Kenny G has become the biggest selling instrumental musicians of the modern era and one of the best selling artists of all-time with global sales totalling more than 75-million records. His biggest album was 1992’s Breathless, which sold a staggering twelve million copies in the United States alone. In addition, his 1994 Christmas disc Miracles: The Holiday album ranks as one of the most successful Yuletide albums ever, with sales over 8-million copies. Seven of his singles have hit the Top-40 on the Billboard Hot 100. He has also been ranked as one of the most-played artists in the Adult Contemporary format, with nine top-ten singles. His biggest hit came with 1987’s “Songbird,” which peaked at #4 on the Hot 100. Kenny G continues to play to sold-out houses across the globe, with dates on his calendar already filled through mid-2015.

Kenny G has collaborated with some of the biggest names in the business during his legendary career, ranging from Michael Bolton, to Weezer and Whitney Houston. He recently worked with pop superstar Katy Perry on her single "Last Friday Night".