Calamia ends an amazing year with a win 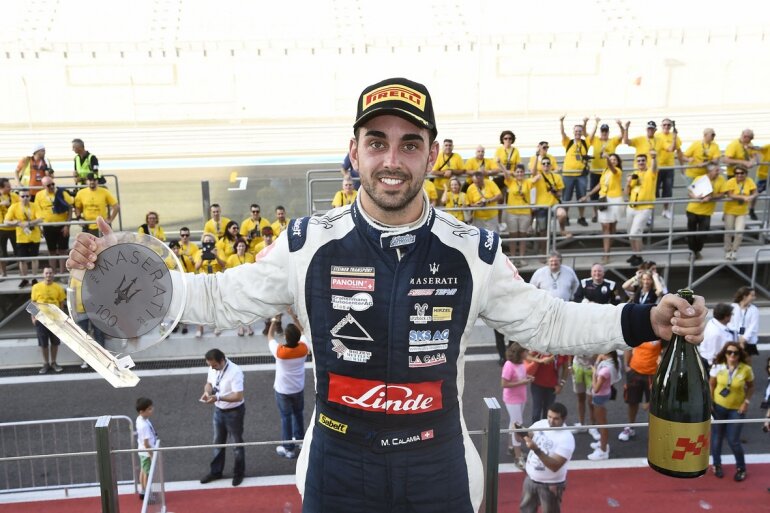 The 2014 Maserati Trofeo began with a  Mauro Calamia win at Spa, Belgium, and ended the same way. The Swiss Team driver's stage this time was Abu Dhabi, in the United Arab Emirates; scene of the final round of Maserati's single-race series.

With this latest victory, Calamia has added another notch to his belt. He was chased hard by Riccardo Ragazzi, missing here, until he secured the title at Shanghai.

The weekend's opening two races on Friday saw Calamia and Romain Monti take the wins; Calamia repeated the trick in Saturday's hour-long event after a perfect drive. He crossed the line ahead of Monti and Lino Curti, taking his first pole of the season after taking advantage of Mario Cordoni's last lap retirement. Roberto Benedetti/Fulvio Ferri came home fourth, ahead of Norberto Cangani/Angelo Rogari, Andreas Segler and Alessandro Mazzetti. The endurance race was a tough one and saw many of the starters pull up: of the 26 Maserati GranTurismo MC Trofeos that lined up on the grid, not all made it to the finish.

The series' closing ceremony was held on Friday at the exotic O1NE club, flanking the circuit at Yas Marina. In this spectacular setting, the man in charge of the Maserati Trofeo series, Roberto Bozzi, presented the awards. As well as collecting the Overall World title, Calamia also pocketed the Trofeo Europa, the Pirelli Pole Position Award and the Trofeo Under-30. Roberto Rayneri took the Trofeo Over-50, Massimo Mantovani the Pirelli Twin Drivers Cup and Roberto Ragazzi the Pirelli Single Driver Cup.

Mauro Calamia: "I am surprised at how it turned out: I managed to win by a big margin. I was pretty edgy at the end of the compulsory stops as I didn't know how things stood: I thought that I had lost the lead because of the extra 20 seconds. This meant that I asked a lot of the car and it responded. Luckily, Romain Monti was tucked in behind me and this meant that I increased my lead even more. It was the best way to end a fantastic season".

The race calendar and new regulations will be published in time for the sixth edition of the Maserati Trofeo World Series, set for 2015.