The hotly anticipated EFC AFRICA 26 weigh-in took place at the Coca-Cola Dome this afternoon, featuring all 26 athletes competing in 2013’s final event tomorrow night. Heavyweight champion Andrew van Zyl made his intentions abundantly clear with a pulsating stare down at challenger Ruan Potts. All athletes sported black armbands in honour of the late Nelson Mandela, Africa’s greatest warrior of all. 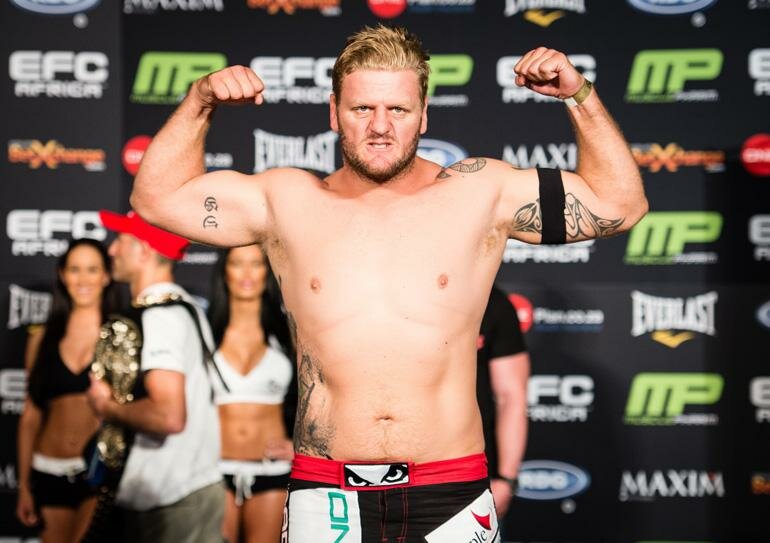 Returning to the iconic Coca-Cola Dome venue for the first time in two years, fight fans cheered as each athlete hit the scale, and looked on as pockets of drama played out.

Anticipation hit fever pitch during the wait for the heavyweight champion and challenger to emerge, the crowd pumped further by the promo video played before.

“If Ruan doesn’t knock me out I’m going to drag him into the deep water, and drown him there,” stated the champion.

Themba Gorimbo, appearing in tomorrow night’s fourth bout, was fired up. He roared at the crowd before near sprinting his way to his opponent and their face off. Crowd favourite Sibusiso Mdoku stepped onto the scale wearing his signature shades before he and opponent Pietie Coxen clashed heads in a clear forewarning of a storm to come.

The highly anticipated bantamweight bout between local legend Matt Buirksi and Durban’s bad boy Abdul Hassan, cutting to the lightest division for the first time, was another favorite with both big men hitting their mark superbly.

Nigeria’s Irishman, Henry Fadipe, born in Lagos but raised in Dublin, hit the crowd with a curveball when he took to the stage wearing a red devil mask, which he only removed to give opponent Michiel Opperman an icy stare when they finally faced each other.

Two athletes did not make weight. Johan van Staden registered a whopping 2.35kg’s over the 70kg lightweight limit. He has suffered a purse deduction which transfers to his opponent’s camp. Alain Ilunga was 350kg heavy, an amount that was waived by his opponent Peter Nyide.

EFC AFRICA returns to the Coca-Cola Dome, Johannesburg, for EFC AFRICA 26, presented by MusclePharm, on Thursday 12 December. Tickets on sale now at computicket.com. Stream the entire event live, in HD, at efcafrica.tv

EFC AFRICA™ events are broadcast to over 110 countries across the globe in multiple languages. The live broadcast is available to over 130 million homes across Africa on SUPERSPORT, the continent’s largest sport network, as well as in the USA, Canada and the Caribbean on FIGHT NOW! TV, America's only 24-hour combat sports and entertainment channel. Live broadcasts of every event are also available throughout the Middle East and North Africa on Abu Dhabi TV and across Romania on free to air broadcaster Transilvania L!VE.

The best bouts from every EFC AFRICA™ event fill up action-packed television episodes broadcast to 50 million homes in the USA on the CSI SPORTS network, throughout Europe and the Middle East on EXTREME SPORTS CHANNEL and across Canada on FIGHT NETWORK as well as in Africa on SUPERSPORT.