Taking part in a three day stage trail run as part of a two member team might be considered a challenge in itself to most trail running enthusiasts, but imagine meeting your team mate for the first time the night before the start of Stage One. Although this was the case for Al Leslie and Matthew Daneel at the 2013 ProNutro AfricanX Trailrun presented by New Balance, the experience was so memorable that they’ve teamed up again for the 2014 event. 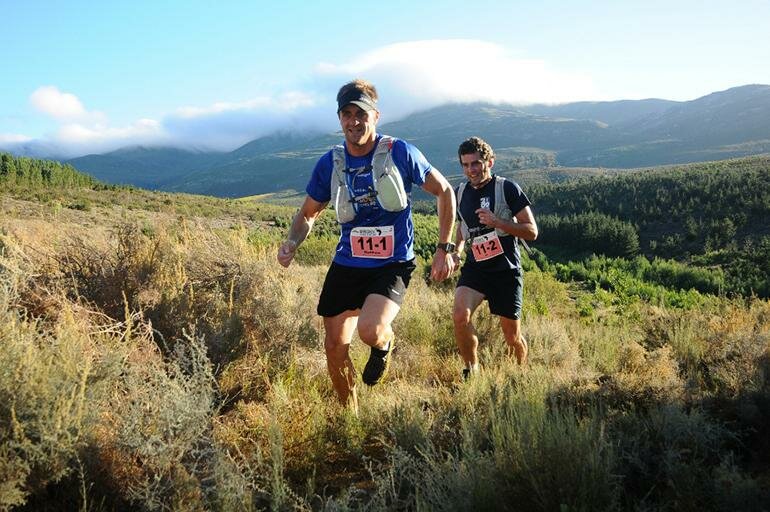 “It was a combination of fear and laziness that caused my original ProNutro AfricanX Trailrun partner to withdraw,” laughs Leslie. “I managed to line up a second partner who ended up withdrawing two weeks before the race due to injury. I then arranged a third partner who withdrew one week before the race due to family commitments. In desperation I put my name up on various Cape Town running Facebook pages and had three enquiries before the day was out. The second and third were from two girls, who I later met and discovered to be stunningly beautiful top trail runners, but unfortunately I signed up with the first one to reply who was Matt. Luckily he turned out to be a machine and pretty easy on the eyes too if truth be told”.

“For me the most memorable part of the 2013 ProNutro AfricanX Trailrun was the scenery, getting to know Matt, bantering with the other runners and the cold beer at the end. In 2014 I will be looking forward to more of the same,” said Leslie.

“I met Al the night before the start of Stage One,” said Daneel. “After enduring what can only be described as an EPIC 3 days in the mountains, Al and I have formed a sort of 'bromance’. We still keep in touch, keeping team spirits high for the 2014 reunion of team 'Satisfaction Octopus’. The event atmosphere before and after the stages was absolutely incredible. Many war stories were shared a long side the pool in the sun and many new friendships were formed. The ProNutro AfricanX Trailrun was unbelievable, definitely the most memorable event of my life thus far”.

“We had serious post race blues last year,” continues Daneel. “We couldn't wait to rekindle the 'bromance' that AfricanX created for Al and me. We had so much fun on the trails, plenty of banter and laughs as we ran. Al is a crazy funny Brit and had me in stitches 90% of the time. We managed a 10th overall finish last year and we would love to improve on that. Let the fairytale continue”.

Teamwork forms an essential part of this much loved event, with participants having to rely on each other’s experience, strength and expertise in order to complete the route. Teams of two (male/female/mixed) will be seen battling it out on a route varying in distance between 25-38km each day. The three routes have been planned in such a way that the participants will have the opportunity to tackle a different breathtaking scenic route each day, allowing them to enjoy the full beauty of the Overberg.