Running in the clouds

The race was unfolding at altitude. The favourites had taken to the front of the race at checkpoint 4, located at the top of the 1,000 m climb, but there had been little word since. Race Director Andrew Booth was anxious! It is along this ridge where the runners are most vulnerable and also the furthest point from the finish if anything were to happen and medical services were required. The previous day the weather had been perfect for the run, but it was now Saturday, race day, and the clouds decided to make the race slightly more interesting. The skyrunners were now running in the clouds and they were behind schedule in reaching checkpoint 6. 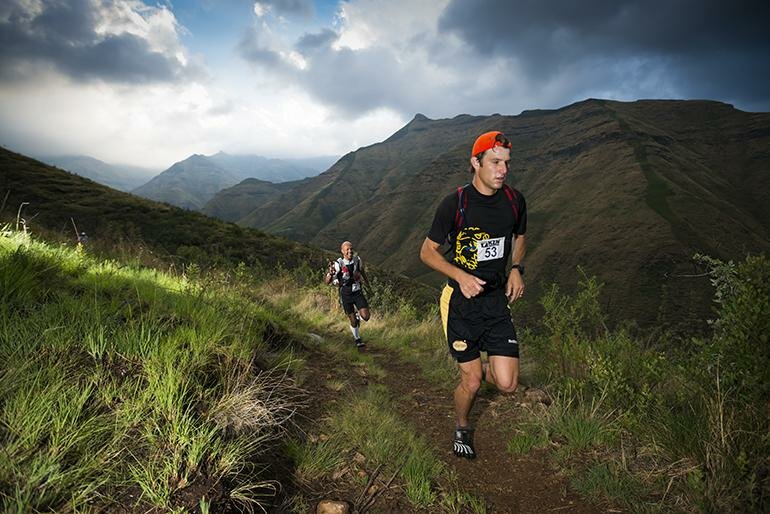 Skyrunners had descended on Lesotho from all over the world making the Lesotho Ultra Trail a truly international event. Runners from Belgium, Spain, Australia, Canada, North America and Britain joined fellow South Africans at Maliba Lodge, located in the heart of the Ts'ehlanyane National Park, deep in the Maluti Mountains of the Butha-Buthe District.

The Ts'ehlanyane National Park protects a 5,600 ha patch of rugged wilderness, with altitude ranging from 1,940 m to 3,116 m and is considered to be almost 'trans-alpine'. Based on the definition of a SkyMarathon®, whereby the race needs to be within a minimum of 2,000 m elevation gain and between 30 km and 42 km in distance, with a course over paths, trail and rocks (Ultra SkyMarathon® exceeds these parameters by 5%), this park, with its network of rocky paths, rugged ascents and pristine landscapes made it the perfect location for Africa’s first Ultra SkyMarathon®.

The excitement at race registration was palpable, with skyrunners discussing what lay ahead as the mountains were now a reality. Some of the runners were apprehensive, while others were eager to get the race underway. Gear checks were done on a rigid basis, as runners had to have the required gear otherwise they would not be allowed to run. The weather here changes rapidly, I was told, so they had to be self-sufficient and prepared for any eventuality up on the mountain, hence the need for the right gear to sustain them until a rescue party could be sent out. “These mountains are unpredictable!” commented Race Director Andrew Booth, and for this reason, race registration and gear checks were all part of the Skyrunners' routine.

Race day arrived and the weather gods had dealt a cruel hand to the runners! The upper ridge, the highest part of the race at 3,100 m, was covered in cloud and would make navigation interesting. The mood was sombre and runners huddled around small fires in the new restaurant. Some sat quietly, inwardly focused, and were comforted by loved ones, while others chatted to fellow runners, to take their mind off what was to come.

The race start was frenetic and the race favourites, AJ Calitz, Lucky Mia, Andrew Hagen and Iain Don Wauchope, soon powered their way to the front. Race strategies were becoming apparent as Calitz, Mia and Don Wauchope pushed hard up the hill, leaving Hagen, Honey and Diez-Raobago to settle into their own pace behind them. However, this was all about to change! 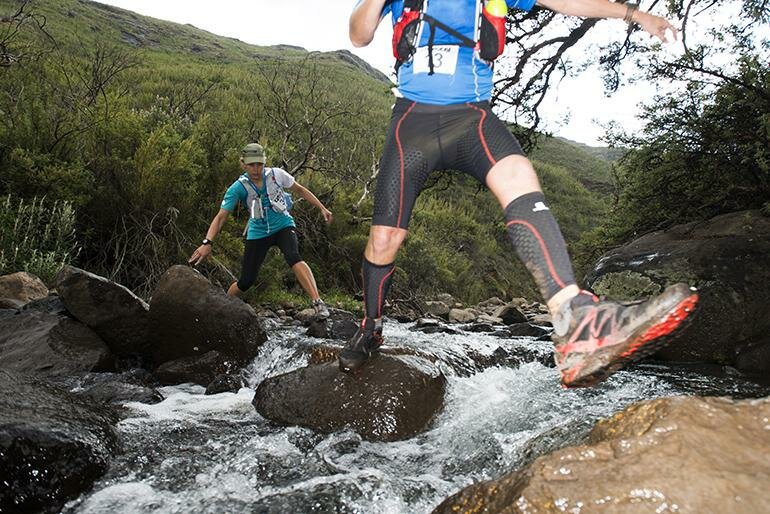 "It was at this point that the race did not unfold as predicted and some were hesitant to give the winner, Andrew Hagen, credit for a race strategy that paid full dividends," states Booth. "But his presence on the mountain, as one of the fastest descenders in the field, put pressure on the favourites." This pressure resulted in Mia, Don Wauchope and Calitz making an error when they lost the markers and got lost in the cloud, and ultimately lost time to Hagen. “The visibility was reduced to about 20 metres. All our physical and mental energy was required to focus on the line of the course,” claimed Hagen. It was at this point that Hagen teamed up with Honey and Diez-Raobago to navigate in numbers and ensure that they stuck with the course markers. The cloud made the going tough, with runners literally running from one tag to the next. “The mist thickened at one point and it became even harder to see. I’d run to a tag and the mist would be hiding the next one, so I’d guess the line and go for it, and then adjust as the next tag came into sight,” said Hagen. At times, the runners slowed their pace right down, even to a walk, to remain on track in the tough conditions.

Meanwhile, down below, Booth was getting anxious. The front runners should have reached checkpoint 6, but there was no word. Every time he called on the radio he got the same reply, no runners had come through as yet! It had been estimated that the runners should have reached the checkpoint in about three hours, but we were now at the four-hour mark and there was still no sign.

Finally, the call came through, but not with the names expected! Andrew Hagen had a slight lead on Manuel Diez-Raobago, followed closely by Quintin Honey. There was no sign of Calitz, Don Wauchope and Mia! In fact, the call came through that two ladies, Tracy Zunkel and Robyn Kyme, had passed the checkpoint before the three men!

By checkpoint 7, located at the bottom of the mountain, Hagen had built up a healthy four-minute lead, which he managed to maintain until the finish line, where he was greeted by a cheering and ululating crowd that had gathered to see the winner of Africa’s first Ultra SkyMarathon®. Meanwhile Mia, Don Wauchope and Calitz managed to haul in the two leading ladies on the descent, finally finishing together on the line in fifth and six positions, with Mia pipping them to the line in fourth.

The ladies race was turning out to be a close affair. Tracy Zunkel, the pre-race favourite, and Robyn Kyme matched each other pace for pace, cleverly staying together and safely navigating their way across the highest section of the course in the clouds. It was at the bottom and over the next climb that Tracy managed to build up a seven-minute lead over Kyme, taking her to a very emotional win at the Lesotho Ultra Trail 2013.

It was not long after the first men finished that the cloud lifted and opened up the mountains to glorious sunshine for the rest of the field to enjoy the views from the highest section of the race!

The good news for all skyrunners is that the South African Skyrunning Association has already announced the national skyrunning circuit for 2014, so get yourselves ready for #SkyrunningMzansi. •