The 2013 Mauritius Freeride Challenge, from 3 to 11 August, brought back an old concept of mixing up professional and amateur windsurfers in a team racing format. 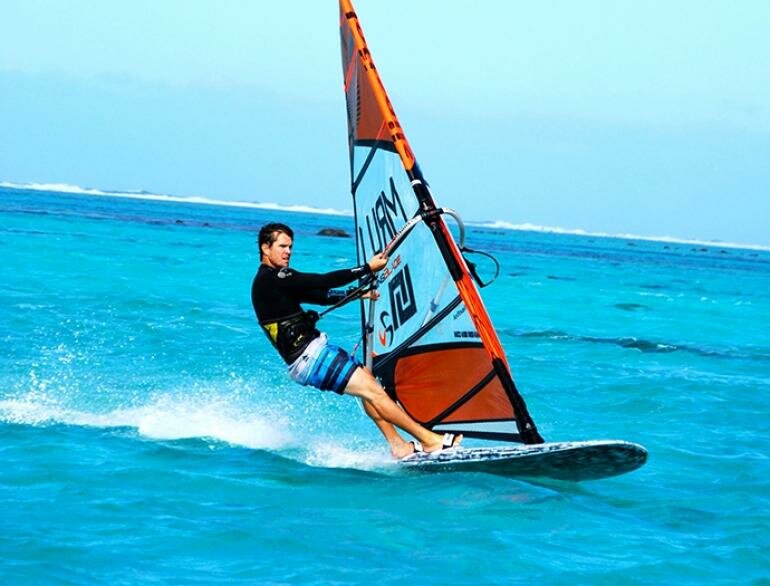 As South Africa currently had no professionals competing on the PWA World Tour, we weren’t terribly familiar or confident with this type of racing. The Freeride Challenge also featured just one week before the World Cup event in Turkey, so current SA National Champion, Mitch Wagstaff, thought he’d use the time to prepare himself for his first appearance in a World Cup event. So, on Thursday, 1 August, 2013, a team of four from Cape Town left the rain and flooding behind and departed for Mauritius’ first international windsurfing contest in many years.

Taking the 2 p.m. flight, we arrived at the hotel just in time for dinner, drinks, and a toast to the weekend. Friday morning we hit the buffet breakfast and fuelled up for the day. We were staying in the south-east corner of the island at Le Preskil Beach Resort, near the town of Mahebourg. The hotel manager came round to introduce himself and welcome us to what was looking to be a fantastic week of windsurfing. We took a quick tour of the hotel, but with the wind already blowing a solid 15-20 knots, we were all thinking the same thing …

The Pointe d’Esny Yacht Club is just 100 m up the road from Le Preskil. It is normally closed to the public, but the contest organisers had made arrangements for us to sail there all week. At high tide, you can sail all around the hotel, while at low tide, the best place was from the club. Being winter back home and the day before the event, we sailed all day to break our bodies in.

That night at the ‘meet and greet’, the hotel treated us tourist windsurfers to some cocktails and snacks. We discovered we’d be sailing against Australian and French riders from the Pro World Tour, not to mention a Mauritian fleet of more than 30 riders. Later that night, three more of our mates from Johannesburg finally landed, but the night was cut short due to the first day's racing starting early the next day.

On Saturday morning we hit breakfast as soon as it opened and by 7.30 a.m. we were already on the road for the hour-long trip to Le Morne. Situated in the south-west corner, this world famous wave spot gets the most wind on the island. At registration and the skippers' briefing, the structure of the event was explained to us in a mix of French and English. Basically, we would race in four big challenges over the course of the week. Today we would race the Malibu Classic in the narrow lagoon of Le Morne.

With the wind a cracking 28-32 knots, competitors pulled out their smallest sails. Mauritius doesn’t usually blow that strong, but with contest rules limiting the arms race to two boards/two sails, none of us had brought small kit. Things were further complicated by a running Le Mans start off the narrow beach, a tight figure-eight course, and waves breaking over the reef around the outside buoy. We knew this was going to be a tough day, but at least everyone had the same problem.

There was more than 40 riders taking part this year, the organisers knocked out two full eliminations over eight races in total. The Mauritians quickly showed how strong they were this year, with local champ Julien Maurel ousting SA’s National Champion, Mitch Wagstaff, and pro-rider Sean O’Brien from Australia. This had the locals all hyped up for the final race of the day, but ultimately French pro-rider Antoine Questel demonstrated his power and control in the testing conditions to claim victory.

The second event of the Mauritius Freeride Challenge was the Phoenix Crossing; a gruelling 40 km race from Le Preskil Beach Resort to Île aux Cerfs, 20 km to the north. Crossing the vast lagoon was thought to be the toughest challenge of the contest; navigating the unknown number of coral banks and channels, big changes in wind pressure, standing on one leg for 20 minutes, and then turning around and coming back on the other leg. But as we discovered, this was definitely the gem of the contest.

Forty-plus windsurfers and kitesurfers lined up as a motor boat screamed down the start line to signal the start of the race. Riders tore down the course in teams of two, heading for the first and only gybe buoy at Île aux Cerfs. Near tragedy struck the Australian team as O’Brien broke his universal joint 10 km into the race. Fortunately, the design of the joint prevented the mast from punching a hole through his board and allowed him to continue the race without sustaining any damage. At this stage, the wind had picked up to around 20-25 knots, putting a lot of stress on the guys who gambled on a bigger sail … pretty much the whole fleet.

At the halfway mark, Questel led the way, followed by Maurel and SA’s Mitch Wagstaff. But as the reach had become broader on the way down, the real challenge now was the long beat back home. A smarter selection of fin size allowed SA’s Pete Lumley and the two Australians to catch up to the front runners. After an hour's sailing, the top ten riders were all within a minute of each other, but as the team result was determined by the second rider, all eyes were on the 'slower' teammate, to see who pulled in first. In a nail-biting finish, local knowledge seemed to win the day as the Mauritian A and B teams poached the top two spots. A relieved Australian team finished third, followed closely by the South Africans.

With a good wind forecast for the rest of the week, the organisers gave us the Monday off to explore the island. 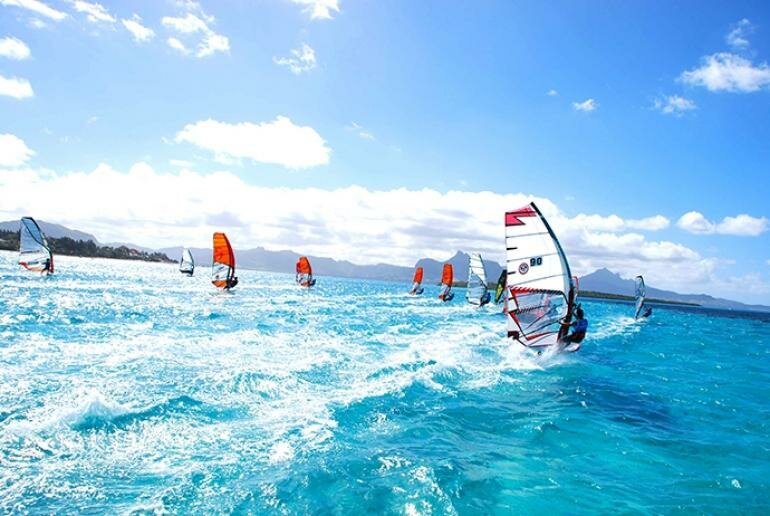 Tuesday saw everyone return to Le Preskil for the EKIP Speed Challenge. This was basically a ten-minute version of the Phoenix Crossing, with a giant downwind slalom course finishing at the hotel. The race took us on a course around Île aux Aigrettes, the island just off the coast and home to giant tortoises.

This should have been a fairly easy day for most people, but with the wind varying between 15-25 knots and the course set very broad, this proved to be a game-changing point in the contest. In the difficult conditions, local champ Maurel struggled to find speed in the lighter patches. This allowed variable-condition specialists like Lumley and O’Brien to storm to the front of the fleet. Both looked very dangerous on the day, but Questel and Leclézio just managed to keep them from line honours. The current world women number two, Delphine Cousin, also showed her strength by cracking a top-ten position.

With moderate wind conditions for Wednesday and Thursday, the organisers gave us another two days off to explore the island, but most of us just used the time to repair ourselves, enjoy the sun, and the rum.

Friday kicked off the two-day Oxygen Cup and final challenge for the week. Another grand slalom course was set, starting at the shipwreck out on the reef, then navigating five gybes between Île aux Aigrettes and the beach, and finally finishing at Le Preskil. With the wind at just 15-18 knots, it looked like there could be a repeat of the previous day's racing. Questel’s challenge was also hampered as he broke his mast in race one. This left the door open for O’Brien to storm to victory in the first race. Despite being forced to use his smaller sail for the rest of the event, Questel demonstrated supreme skill and managed to pull off a win in race two. O’Brien made another solid race to finish second, while Leclézio and Maurel traded blows to see who would finish the top Mauritian.

The racing continued on Saturday, with a change of venue and all riders heading to the Yacht Club. For the final day, the race director set a long, figure-eight course and five races to maximise the light but great conditions. The big performance of the day has to be the young Australian, Luke Baillie, for pulling off a win in the final race. However, a bad result on the previous day kept him at 6th. Fellow Australian Sean O’Brien finished 2nd in every race, in a great demonstration of consistency. SA’s Pete Lumley pushed the leaders in every race, but never quiet managed to crack a top-three position. This battle was mostly fought between the two Mauritians; Leclézio and Maurel. But unbelievably, the 100 kg French beast, Questel, again dominated all but the last race, despite being stuck on his smallest sail.

That night, at the prize-giving, the hotel treated us to a fantastic buffet dinner, live music, and cocktails at their Tapas Beach Bar. Despite all the broken and sunburnt bodies, everyone was super anxious to find out the final team and individual classifications.

Young Delphine Cousin, from France, did an excellent job to keep herself inside the top ten, but couldn’t quite take out the 21-year-old boys from SA and Australia. Luke got one over our local champ Mitch, but missed jumping the two veteran Mauritians, Tyack and Ulcoq, by one point. Just ahead of that pair was SA Master Pete Lumley and Aussie Sean O’Brien, with the wallaby again getting the better of the springbok. In a very close finish, Leclézio got the edge over the young Maurel. However, the class of the field went to France’s Antoine Questel, who dominated the fleet from the first to the last day.

In the team classification, the Maurel Leclézio proved unbeatable. However, the remaining teams were very closely matched, with just one point separating each of them, which I think highlights the fantastic nature of Pro-Am team racing.

With the sun set and smiles all round, we already can’t wait to come back next year and do it all again. And as Julien prepares to enter professional racing next season, and Mitch joins Sean, Luke, and Antoine in Turkey, we wish them all good luck when they next do battle.