Mauritius is still paradise even when you're staying in modest, self-catering apartments and cruising around in a battle-worn bakkie. It's also safe and friendly for the most part, which makes getting lost and finding your way back a lot more fun. Three friends and I headed there during the low season, with a basic plan to explore the south-west bend of the island and check out a string of surf spots we'd heard about. On a diet of local groceries and a student's budget, we eked out a world-class holiday that felt like a mix of backpacking and five-star treatment. 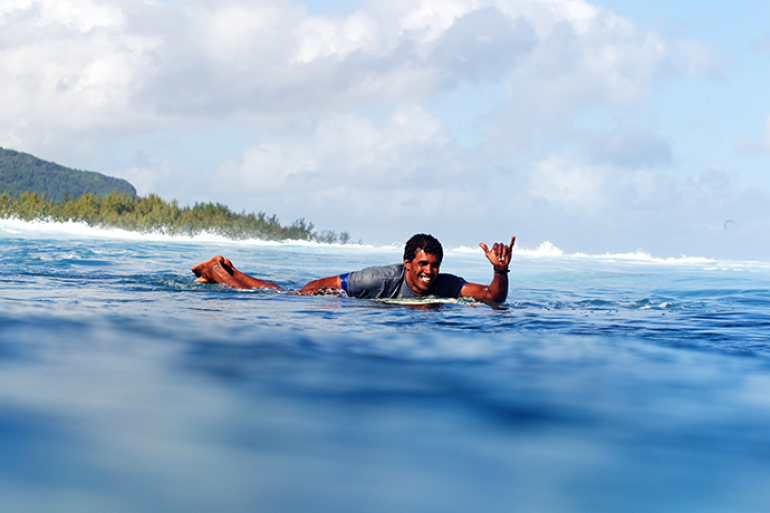 The full moon gave us a view of the wind-tormented sea below us as the plane descended into paradise, and landed in the teeth of a miniature cyclone, characteristic of Mauritian winters. Outside the airport, taxi drivers weren't thrilled about four dudes wanting to load eight surfboards on top of one car, but we eventually found a driver who was up to the task. He handed us what looked like shredded dish towels to tie the boards down.

Our moonlit tour of the coastline continued as we drove along a winding road that led the way to Le Morne, where both sides of the island lay within striking distance. The driver pointed up at a mountain range above the village, its humped form outlined in the dark by the moonlight. “Sis mountain has a storee,” he told us. “In se 1800s, Creole slaves hid from ze French masters up in the mountains,” he explained. As the story goes, the slaves formed a community of hideaways up there and refused to go back down to lead a life of shackled servitude. After the British took over the island and abolished slavery, soldiers marched up there to tell them they could come down as free men. Unfortunately, this looked like an ambush to the hideaways, who wanted freedom more than anything. “Sis slaves didn't understand English, you see? So zey jump from ze mountain and die. This is a sad storee, no?” We all nodded. Then he told us another sad story. “Zat will be one hundred Euros. Good price, yes. Merci beaucoup, monsieurs.” This would be the only time we got ripped off.

That night we met Kevin, our landlord for the week. He had promised us a car and we were anxious to see what we'd be driving on these dangerous Mauritian roads. After handshakes and small talk, he took us out back and unveiled the 'Blue Marlin'. She was a 1991 diesel-engine Hilux. There were torn stickers spread out across the back window and a collection of beaded necklaces hanging from the rear-view mirror. The final touch was its old stereo and accompanying CD, a compilation of Ace of Base hits, some Bon Jovi numbers from the Dead or Alive album, and a local artist who sounded like a French Barry White. We surmised that it was probably Kevin’s playlist from the days when he was still picking up girls in the Marlin. With a usable car and basic plan in place, we all fell asleep easily on night one.

It's not often that you go on a surf trip and end up getting dry-docked because the waves are too big. The little cyclone that greeted us had made the ocean wild and tempestuous. The good thing was we could do some exploring.

You can tell a lot about a country by driving around it. Outside the resorts and plush expat suburbs, everybody seemed to lead a humble existence. The houses were one repair job away from falling apart, the streets full of stray dogs, and there were no shopping malls. The nicest buildings you'll find are the mosques, temples, and churches, which speak of the varied population on the island. You could buy cheap food from dixie shops made of scrap metal, or fresh fish and vegetables from roadside vendors. Dessert was MSG-injected crisps that would probably make your eyes glow in the dark if you ate too many. Cheap restaurants are easy to find too, but just be careful of ordering anything with meat.

After selecting a few locations we headed towards the northern most point of the island, which takes roughly two hours if you drive as wearily as we did. The Blue Marlin's rattling turned into a fully-fledged bucking action on the motorway, making the drive feel like you were riding a mechanical bull around. As the Western population continues to grow, so the need for malls, coffee shops and electronic stores develops, and you can’t help but notice the development taking place near the posh suburbs and resorts.
After a full day of driving, we bought a crate of local Phoenix Lagers and headed to the beach, where a blinding sunset painted the ocean red and orange. At €15 per person, per night, we were getting the best seats on the island at a fraction of the cost.

The ocean became increasingly more dangerous throughout the week, as the wind switched direction and blew across the bay. So we decided to do some more sightseeing and ambled to the sprawling market in the capital city, Port Louis. It felt like we had stepped right into the real-life equivalent of television static. Store owners selling T-shirts and electrical doohickeys hassled us to buy anything; cheap leather shoes, wooden dodos, back massagers, balaclavas, toy guns, knife sets, aphrodisiacs, salad spoons and laser pointers.

There's a big fruit and vegetable market inside a double-storey farmhouse, and what it lacks in competitive salesmanship it makes up for in back-to-back crowds. It seemed like everyone was doing their grocery shopping there.

Port Louis lifted her eye patch to us when we entered the meat market next door. We were presented with a disturbing ensemble of cow and sheep heads staring back at their hacked-up bodies lying on the table; the afternoon heat spoiling everything left out for too long. It's a fast-moving butchery that doesn't make time for the squeamish, and people queue behind the counters baying for a cut of the best meat. They want it ASAP, and if you're not in line, you need to move out of the way.

On another day we headed out in search of a volcanic waterfall we’d heard about, Rochester Falls. We arrived at a dusty parking lot, unsure about where to go. A snotty, bat-eared creature slithered towards us and demanded we follow him. He looked like Sméagol, only grimier. He took us down a sheltered path to the bottom of the falls, where the land forms a natural amphitheatre for spectators. Some local students were there, smoking cigarettes and pounding a few beers.

“You jump,” Sméagol said, pointing to a ledge that plummeted into the abyss. We all laughed and thought he was joking. The students cheered and nodded. “You must!” Sméagol said, getting nasty and aggressive. Then someone yodelled at us from the top of a tree, about 10 feet above the waterfall's highest point. It looked like Sméagol's brother. This crazy guy was surfing on a branch, bouncing it up and down, and working himself into a frenzy. Nobody wanted to see this. Then he jumped, landing in the centre of the plunge pool. We all inhaled our tongues, anticipating the man's imminent death. He came up laughing on the other side of the pool and climbed up the waterfall as if it was a step ladder. To avoid looking like a bunch of pansies, we all jumped from the waterfall's edge and lived to tell the tale.

Mauritius has a bad reputation in the surfing world. Tales of barbaric locals and inconsistent swells have prevented the island from becoming a mainstream surf destination, like nearby Reunion or the Maldives. The Franco-Mauritian surfers are known as White Shorts (a racial term) and have spent the best part of the last four decades making sure that visiting surfers know their place in the line up.

We took a chance on our final day at one of Le Morne’s most notorious waves during a weekday, expecting hostility and cold glances. Instead we found the complete opposite in a crew of local Creole surfers, who worked at one of the beach resorts nearby. They were upfront about the bad vibes for touring surfers. That's the law of the land, and the locals who enforce it aren't interested in compromising. But it was Monday, the locals were at work and we were welcome to sample the reef in front of us. Cutting a path through the perfect water and seeing the mountainous backdrop felt like entering a beautiful painting you've been staring at for years. Once we got to the keyhole we could see the reef coming out in boils, and the prettiest waves I've ever seen ran along the pass. The swell direction was a bit out, but the wind was light, the tide high, and the water as clear as a well-maintained swimming pool. And the best part was that we were the only ones there. As you took off on a wave, you could see the water drawing off the big, colourful coral heads that mapped the wave's path along the ocean floor. It was the best day of the trip, but sadly the end of it.

It was time to hand Kevin back the keys to his apartment and the Blue Marlin. Parting ways with the Marlin was almost as sad as leaving the island. We cleared passport control with sunburnt eyelids, swollen reef cuts and good memories. The week had been a bit like watching a rugby match from the cheap seats; not as comfortable to begin with, but twice the fun once things got going.