Reading about famous explorers’ stories of expeditions and adventures has always left me with warm feelings and a longing to go on a big expedition myself one day. However, I have to work from 8 a.m. to 5 p.m. to keep my head above water, leaving little time for anything else, let alone a trip across Africa. 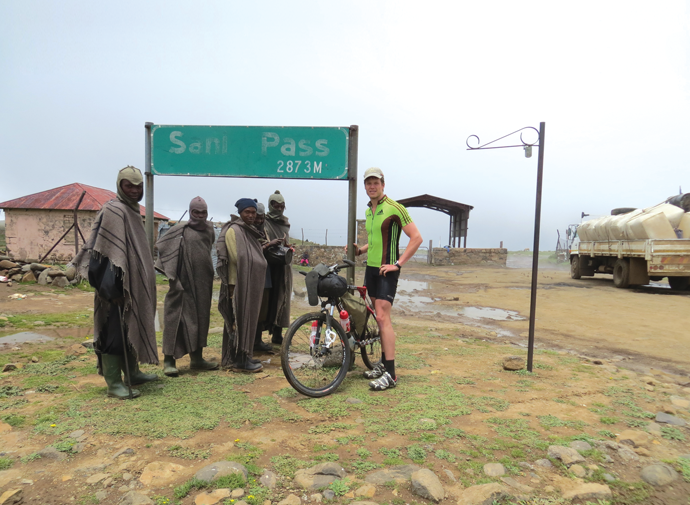 I have always admired great adventurers like Sir Ranulph Fiennes, Mike Horn and Riaan Manser, who spent most of their lives embarking on an expedition into the unknown, exploring and living the adventure. Yet, even with stories such as these to excite and inspire us to do something similar, it's sad to see how many people spend their weekends in front of the television, watching the adventure rather than living it, because time and money are the two biggest obstacles. This gave me the idea of putting together a series of low budget and weekend adventures that are original, daring and hold true to what being adventurous is all about. Just another camping trip or sleepover in the bush wouldn't cut it.

So, for my first trip, I decided to cycle solo through the beautiful country of Lesotho, situated next to the majestic Drakensberg range. My plan was to travel from Cape Town to the western border of Lesotho, Maseru, by bus, and then cycle to Sani Pass, a distance of approximately 320 km.

From SANI PASS, I would hitch-hike to East London (say hello to my girlfriend) in time to catch my bus back to Cape Town. I estimated the trip would take me around five days, so with a long weekend looming, I took a couple of leave days extra and hoped this would give me enough time to complete my adventure.

I left the Mother City at 6 p.m. on a Thursday afternoon and arrived in Bloemfontein at 6 a.m. the next morning. From Bloemfontein, another hour-and-a-half bus ride was all that was needed to get me safely to the Maseru border, and the start of an unforgettable journey across 'the Kingdom in the Sky'.

After setting up my bike and passing through the border, I eventually started cycling at approximately 10 a.m. Maseru, the capital city and essentially a base for expeditions and travels deeper into Lesotho, was busy and cluttered with people, as well as taxi drivers who drove like lunatics as they claimed the roads for themselves. Leaving the congested city behind, the roads opened up and I started to relax as the beautiful countryside slowly revealed itself. Most of the road-side spaza shops I passed offered no substantial food that didn’t require cooking, so for the next three days I lived on packets of cookies and potato crisps.

My map indicated the dreaded mountain passes that I would soon have to conquer, but nothing could prepare me for the torturous climbs that waited for me over the next three days. It started in the early afternoon when I noticed the road getting hillier in the distance. I knew from experience gained on previous bicycle tours that the secret was to pace myself and not attempt to climb each mountain pass from start to finish without resting, as there was still a long road ahead. So I walked a few kilometres on each pass and this system worked really well. I finished the day at the small town of Likalaneng, having covered a distance of 85 km.

When initially planning the trip, I decided that I would sleep in the veld at night, with no tent and only my sleeping bag, as I thought it would be sufficient. With the clouds a very dark greyish colour, I could tell that rain was in store for the night and a plan had to be made. I checked out some desolate buildings as possible options, but in the end I was lucky enough to be offered a place to sleep in an office at the nearby Police Station, by two young officers on duty.

An early start and fresh legs gave way to the day as I started my assault on the never-ending mountain passes of Lesotho. Frequent stops at fresh mountain streams gurgling next to the road kept me going, and the landscape looked like something out of a storybook. A bicycle is definitely better than a car for such a trip, as you feel so much closer to your surroundings and the people. The day's light drizzle, as opposed to the scorching sun, made for easier cycling conditions, and I was glad to stop for a bite to eat and rest up at the occasional small village en route. Some of the local folk along the way tried to converse with me, and through broken English we were able to swop a few sentences and stories.

After a breakfast of dry Oatso Easy and some peanut butter provitas, I set out early that morning because I'd heard that the road from Thaba-Tseka to Sani Pass was tough and slow going. With the first few kilometres going well, I was looking forward to a day of good progress and possibly even going all the way to Sani Pass. However, my happy musings quickly evaporated as more mountain passes appeared and the road became even slower because it was covered with sinkplaat and loose sand. On some of the passes I only averaged about 5 km/h, as I had to push the bike, and I quickly realised that reaching Sani Pass was not going to happen today. Along the way, a few motorcycle groups passed me, and being a former motorcyclist myself I couldn’t help but envy the thought of an engine between my legs. My progress was slower than expected, so I was very happy to reach Lehlohonolo after an 11-hour cycling day. A local pony trekking lodge gave me a place to sleep for the night, and although it was summer, I was glad to be out of the cold for the night.

This would be my last day in the beautiful country of Lesotho, and I was looking forward to reaching the much talked about Sani Pass and cycling down it. Setting off early, the road became much busier with holidaymakers returning from their long weekend, their 4x4's packed with all the latest camping equipment and gadgets. The road was also very rocky and challenging, but the thought of reaching my final destination made me determined to push on. The misty clouds at Sani Pass greeted me as I reached the end of my cycling journey, and I was blown away by the steepness of this winding, picturesque pass. Riding down was totally exhilarating, but I got cramps in my hands from having to hold onto my brakes for dear life. But what a ride!

Although not really recommended, I decided beforehand that I would take my chances at hitch-hiking from the Sani Pass border to East London. I soon got a lift on the back of a bakkie to Underberg, about 25 km away, where the driver dropped me off as he was continuing in the opposite direction. Not long after, and with a sign made out of cardboard and bearing the word 'Kokstad', I managed to squeeze into the back of a Toyota Conquest with two very large women. My bike was attached to the boot of the car with cable ties! I reached Kokstad too late in the evening to find any sort of transport, so I decided to sleep at the Engen truck stop, near the N2. Whilst there, I was fortunate to arrange a lift with a young man who transports furniture to Port Elizabeth. We left at 4 a.m. and he eventually dropped me off in East London.

My time in Lesotho was very special, as I had visited a new place, been exposed to a new culture and thoroughly enjoyed a unique experience. I proved to myself that an adventurous lifestyle is within my grasp, even if I have an 8 to 5 job (and it's much better than spending my weekend watching Super 15 rugby). One learns so much from these experiences and it keeps your life from being too risk adverse. All you need, really, is a map and an adventurous spirit.

• Make use of things you already have or do - for instance, if you are a cyclist, plan a cycling trip or if you have a kayak, plan a river expedition.
• Be aware of the conditions you’ll be faced with. Most of my cycling was above 2,500 m above sea level, which has an effect on you and sleeping places are scarce.
• The best time to do such a trip depends totally on what you’re planning. The winter / rainy season won’t work for such trips, as being constantly wet and cold can cause sickness and there's the danger of never wanting to try anything like it again! Try and make use of the March and April months, as these months have a lot of public holidays that will extend your weekend!

• The overall trip cost me in the region of R2 400. This included R400 for my kit (I already had a bike), R800 for food, emergencies, etc, and R1 200 for my bus ticket (prior permission was needed to take my bike on the bus, otherwise I would have had to pay extra, and I also got discount for being a Discovery Vitality member).

• There is no need for carrier racks on a short cycling trip like this; you just need to pack very light.
• I had a ripstop bag custom made for only R250, which fitted in the frame and was attached with velcro.
• You’ll also need some extra water bottle holders that you can attach with cable ties.
• I didn’t take any big items like a tent or gas stove. Keep it basic and it’ll make the cycling easier.

• Buy a decent map of the country or place you’re planning to explore, as it will show all the places of interest. For my trip, the whole country was a must see, but more particular, Sani Pass.

Pros and cons of travelling solo or in a group

• For me, the biggest pro of travelling solo is that I can plan and go on my own terms. You don’t have anyone trying to keep up, no complaining or negative attitude to discourage you, and the quiet times give you a lot to think about! However, going in a group can be much safer, and a group of equally adventurous people can be a lot of fun.

• Baviaanskloof cycling trip
• Swaziland
• It can be anything really, but I feel that a trip should have some sort of goal, like rowing a river from origin to mouth or crossing an area from border to border, whether by cycling, walking or motorcycling.