CASCAIS, Portugal (Tuesday, September 30, 2014): The world’s best female surfers have arrived in Portugal for the second event on the European leg of the 2014 Samsung Galaxy ASP Women’s World Championship Tour (WCT), the Cascais Women’s Pro, which runs from October 1 - 7, 2014. 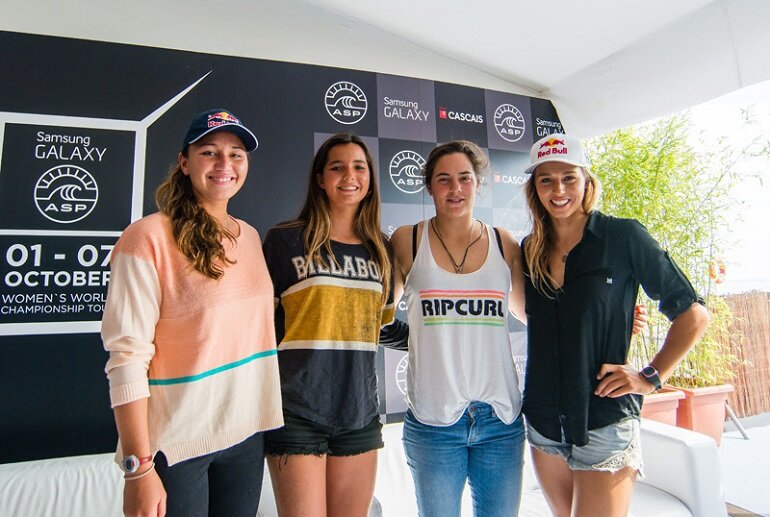 Following Tyler Wright’s victory at the Roxy Pro France there are just 3,200 points separating the top four surfers, and with only two events remaining this season the ASP World Title race is on the line. Sally Fitzgibbons (AUS), Tyler Wright (AUS), Stephanie Gilmore (AUS) and Carissa Moore (HAW) are leading the field, each with two WCT wins this season, and all remain in contention to take the 2014 surfing crown.

The Cascais Women’s Pro is the ninth and penultimate stop on the 2014 WCT. Having joined the ASP Women's Tour for the first time in 2013, this year the event will play host to one of the most exciting World Title races in ASP history. Both the main site of Carcavelos, as well as the secondary site Guincho, offer hollow and powerful waves, the perfect canvas for the field of 18 to showcase their talents.

“This has been the best season of women’s surfing yet and we’re so proud of the whole ASP Top 17,” said Women’s Commissioner, Jessi Miley-Dyer. “It’s one of the closest World Title races ever so we’re really excited to see what happens here.”

“It's wonderful to be back in Portugal,” said defending event winner and reigning two-time ASP Women’s World Champion Carissa Moore. “It looks like there will be a couple of good days of surf and there are such great vibes here. The World Title race is coming down to the wire so it’s going to be really exciting."

“It’s a fantastic feeling to be in the yellow jersey at this point in the season, even though it’s neck-and-neck and so close at the top,” said current ratings leader Sally Fitzgibbons. “It’s a great time for women’s surfing.”

“This next week is going to be really exciting,” said current ASP World No. 2 Tyler Wright. “It’s the second-to-last event of the season and it looks like we’ll have good waves, which is great.”

The wildcard for the event has been awarded to 14-year-old Teresa Bonvalotfrom Portugal. She will compete alongside the ASP Top 17 and complete the field for the Cascais Women’s Pro, which gets underway tomorrow.

“I am so excited but nervous to be competing in this event,” said Bonvalot. “These girls are where I want to be. I just can’t wait to surf alongside the best surfers in the world and learn as much as I can from them.”

Surfline, official forecaster for the Cascais Women’s Pro, have called for: Minimal WNW swell traces are expected for Wednesday and Thursday. Swell moves in for Friday before easing into the weekend. Small W/WNW swell is on tap for early next week.

Event organizers will convene tomorrow morning at 7:30 a.m. local time (GMT +1) to assess conditions and make a call for the day. When competition commences, up first will be Malia Manuel (HAW), Johanne Defay (FRA) and Pauline Ado (FRA) in the opening heat of Round 1. The Cascais Women’s Pro will be webcast LIVE at ASPWorldTour.com