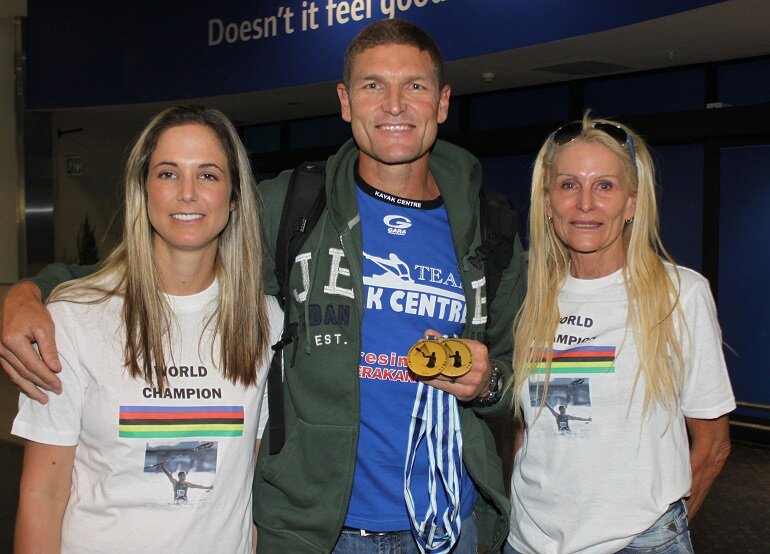 A tired and jetlagged McGregor was greeted by a group of supporters, including his wife Pippa and infant son Thorsten, all wearing t-shirts celebrating his achievements.

"For me, I have now achieved everything that I pretty much desired to achieve in marathon racing," said McGregor.

He said that it had been tough to race the K2 race after a gruelling K1 race the day before, but he and his partner Jasper Mocké had been buoyed by a key moment on the second lap of the race.

"We put in a big surge and we were so dominant in that surge that we both grew in confidence," he said. "From then we just played out of our boots and we managed to get the gold medal."

He added that his shift in strategy on the portages had caught his competitors off-guard.

"I have been battling with a calf injury for the last two months and I was sceptical about being able to do what people expect me to do - run really well on the portages.

"I think the other guys were all expecting me to make a big move on the final portage, but I held back on the paddle leg and decided to leave it all on the water at the end. I think the others ran too hard on that portage to be honest, and when we jumped back in I think they were pretty much spent but II was still really surprised that I managed to open up such a big gap in the end-sprint.

“I was overwhelmed with emotion coming into the finish line - your whole body goes numb with excitement!

McGregor added that the success of the entire South African team was an exciting, positive omen for the future.

"It's the first time that a team from outside of Europe has won the Men's Kayak team trophy and if you look at the performances of the juniors, I think our future is looking really bright."

McGregor added that it is important the momentum is kept up until the 2017 World Championships which will be staged in Pietermaritzburg.

"Let’s hope we can do it in our own back yard in 2017. I am not sure if I will be there, but hopefully I have shown the freeway how to get there."

McGregor said that he was aware that his wife, family and friends were watching the race on live internet streaming throughout the two tough days of racing.

"In the back of your mind you know that everyone who is important to you is watching your every move. It’s not like the days when they had to wait to see a result on the internet after the race," he said.

"One day maybe if the YouTube clip is still up my son will be able to watch it and realise that his dad was a little different." he added.

For any further information go and have a look at the Canoeing South Africa website at www.canoesa.org.za.