Due to the modern freestyle boat design, a whole new world of moves has evolved! One of the first - and probably my favourite - is a forward somersault (360° rotation) that's performed either in a hole or breaking wave, but it can also be done on flat water. This awesome move is known as the loop. 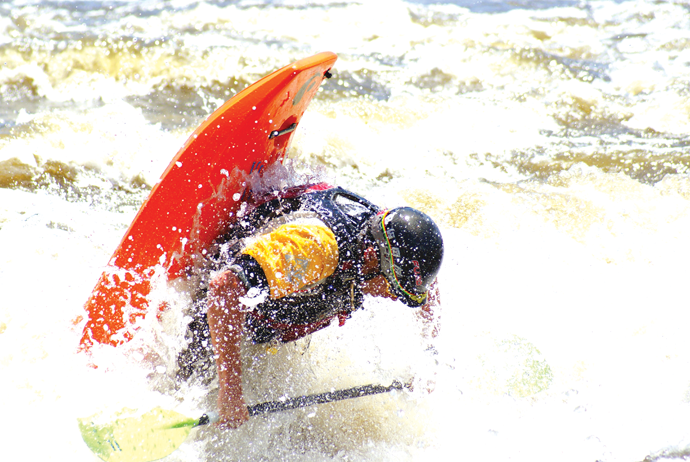 As with pretty much everything in life, a good set-up is crucial to executing big loops. So, to achieve the correct set-up, you need to get onto the highest point of the foam pile, facing straight upstream. There are two ways to do this.

The first is to paddle into a side surf and then dig your downstream edge into the foam pile as much as you can. When you feel that you are being pushed up the foam pile (downstream), you need to get your hull level again and sweep your kayak so that it's facing straight upstream. However, reaching the top of the foam pile like this can easily result in you flushing off the foam pile, especially if the feature isn’t very retentive.

The best way to set-up is to carve to the shoulder of the feature you are on and then surf back across the top of the foam pile. As you reach the highest point of the foam pile, turn into a front surf so that you face straight upstream and into the deepest part of the feature. This carving method is more controllable and has the advantage of giving you some momentum (speed) to work with.

With the first step of the set-up completed, keep one of your blades in a draw/rudder position to help keep your kayak facing straight upstream. Now, allow the kayak to charge down the foam pile towards the seam - where the foam pile and oncoming downstream flow meet each other - of the feature. This is where everything starts happening real fast and you'll need a bit of practice to get your timing just right, so don’t worry if you battle at first because everyone does.

Make sure you are sitting up straight as your bow is about to reach the seam. Keep your blade in the foam, but slide it forward so that it's in line with your knees. You now need to kick your bow into the seam so that the oncoming current pushes it under water. To kick your bow, you will need to lean forward a bit, with your paddle engaged in the foam. As your bow reaches the seam, tense your stomach muscles, as if you were about to do a sit up, and think about kicking your legs down. Your blade in the foam will give your core muscles something to leverage against while you kick your legs down. The kick is crucial because if you don’t really kick your legs, your bow won’t be able to break through the surface of the oncoming current.

As your bow gets pushed under the water by the oncoming current, you need to stand up (either on your feet or on foot blocks) and remove your paddle from the foam at the same time. You will now feel your bow being pushed rather deep until it reaches a point where the kayak will start to pop back up. This is the stage that takes the most practice to get your timing right. As you start popping up, punch your hands straight up at the sky (it helps to look up at the sky as well) and as you reach the highest point of your pop, look back down into the seam where your bow entered and throw your whole body forward into a tuck position as hard as possible; your nose should pretty much touch your deck and your paddle your bow. This will initiate your rotation.

When you are completely inverted (upside down) and your head hits the foam pile, throw your body and paddle onto your back deck and kick your legs out in front of you. This will keep your rotation going and bring the kayak all the way around so that your stern hull hits the oncoming current and is pushed flat and you end up in a front surf position again.

On smaller features, or very flushy ones, you can do what is called the loop stroke. This you do by throwing your body onto your back deck and pushing with the non-power face of your blade (remember you are upside down now), to help give you more power to kick your legs out in front of you. If you managed to get your timing right, you should have returned to a front surf position - and your buddies are standing there awestruck by your amazing skills.

Remember, the loop is a very dynamic move and a key baseline move to progress to the more advanced combo moves, like the Phonix Monkey (a 360° bow pirouette into 360° air loop), and takes complete commitment and a good bunch of humour. As you start to get the timing of your kayak's pop and body movement more in tune with your loops, they will become bigger and take less and less effort.

So head to your nearest hole, wave or anything that's deep enough and has some foam, take a buddy along to keep an eye on you and flop, flop around until you ace that loop. In competitions, if you get some air between you and the water, you'll get bonus points for the air - and it looks as awesome as it feels!

In kayaking, there are a few sneaky strokes to use that will make the difference between styling through some crazy rapids and having some crazy rapids running over your head. And, of course, you'll want to style those strokes in an upright position. The brace is one such stroke and you get two versions of it; the high and low brace.

For the high brace, you have your hands cocked back so that the power face (the face of your blade that pulls the water on a forward stroke) is facing down and your arms are in a pull-up position, about the same height as your chin.

When it comes to the low brace, you twist your wrists the other way round so that the non-power face of your blade is facing the surface and your arms are positioned as if you were doing a push-up on your knuckles.

Both brace strokes should be done in line with your thighs. You can obviously move the blade that you are bracing on further away from your kayak, depending on the situation you are in, but avoid letting your hands move behind your hips as this will put your shoulders at risk.

For both braces the idea is to get your paddle engaged in the water by sliding it flat over the water surface. This will give you leverage to engage your core muscles, which will level out your kayak so that you don’t take a swim when running a rapid. The stroke is not there for you to push yourself upright. It's there so that you can use your core muscles to engage your hips and legs and lift the edge of your kayak, which is being pulled or pushed under the surface, and keep you floating level. My favourite move is the low brace because it's safer for my shoulders and allows you to go from a low brace into a forward stroke really quickly.

With your blade somewhere in line with your thighs and knees, all you need to do to switch to a forward stroke is roll your hand back up so that the power face of your blade is engaged, and pull your forward stroke.

The braces are recovery strokes, but to do them safely, especially the high brace, it is super important that you always keep your arms bent a little. If you over extend your arm and lock your elbows, any unexpected force will target your shoulder joints; the weakest point. Also, never let the blade that you are bracing on go behind your shoulder. To avoid this situation, all you need is good torso rotation.

Next month I will step it up another notch and look at the Space Godzilla; a loop with an extra 90° twist that's added in for fun. And for our river runners, I'll explain how the sculling stroke will help keep your head out the water while you take a beating in a pour-over-style feature.