Fresh off a mid-season break Tyron Bird is looking forward to taking his level of competition up another notch this Sunday, 4 August, when he tests himself against some of the country’s top marathon mountain bikers in the 60km Illovo Eston Marathon – the premier event of the Illovo Eston MTB Challenge, one of the country’s most prestigious one day MTB events. 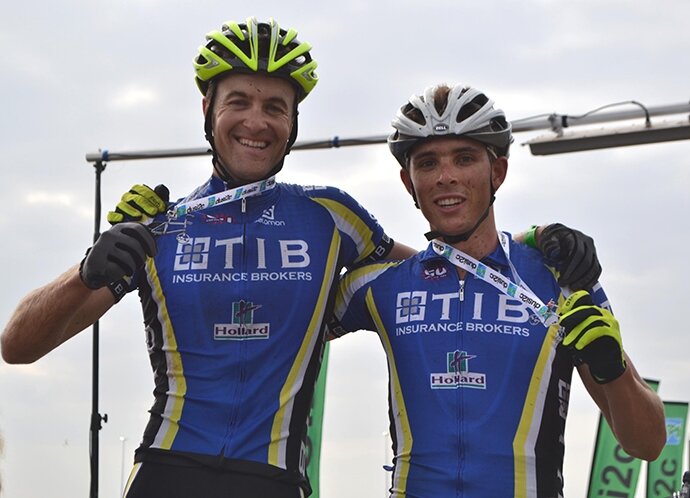 Having gained good momentum midway through the year through victory in the inaugural two-day Dusi2c, with Andrew Hill (TIB Insurance), and a fourth place at the Burry Stander Memorial Sardine Classic, the Kokstad local then headed to Europe for a three week holiday with his mother and sister, giving his legs a much needed break from the demands of the sport.

Upon his return a week ago, Bird eased his way back into the swing of things and got his confidence back up via victory in against an under strength field at the Ingeli Classic last weekend.

Whilst the 60km Illovo Eston Marathon does present a completely different challenge, with a tough, longer route and field of immense depth and quality, Bird is looking forward to heading back to Eston once more.

“I haven’t been to Eston in a couple of years now with the last time I raced there still being when the race was 75km long so I’m definitely looking forward to racing there again on Sunday!” enthused Bird.

“Eston is always a great event and there is always some great competition at the front of the race as it is one of the bigger events on the calendar so I’m sure this year will be another good one.

“With me having taken a couple of weeks off and not knowing the course at all it is difficult to know what to expect so I’ll just go there, give it my all and hope for the best.

“It was nice having a bit of a mid-season break but its good to be back in training again. Hopefully all the holidaying is now out my legs after last weekend and a good week of training this week though,” he added.

With competition for the overall spoils set to be fierce and Bird’s recent European adventure, the 2013 title may just be a bridge too far for the talented youngster however few would count against the regular KZN top performer putting in yet another solid performance.

“As far as I know guys like Andrew (Hill), Luke (Roberts), Rourke (Croeser) will all be there and I’m sure the likes of Brendan (Davids), Travis (Walker) and Patrick (Belton) wouldn’t miss this one either so it will be a really tough race.

“Some of the guys from the national last weekend might also even stay over, making it even tougher to get a top five so I guess I’d be happy with a top ten and if I snuck into the top five somehow then that would just be a bonus.

Course familiarity is not something Bird will be able to fall back on during Sunday’s clash, hence a bold approach may well prove to be the name of the game on the day.

“I guess I’ve just got to go for it,” said Bird. “I can’t remember any of the old route that I did ride a few years ago and things I’m sure have changed quite a bit now that the race is 60kms not 75km so I have no idea what to expect.

“I’ll just have to play it by ear and hope for the best.

Late entries for the Illovo Eston MTB Challenge’s 60km Illovo Eston Marathon, 40km aQuellé Half Marathon, 18km Tala/aQuellé Family Ride and the 10km Stihl Kids Ride can be submitted via www.roag.co.za until midnight on 31 July 2013 or at the venue on the day of the race. More info can be found at www.illovoestonmtb.co.za