On Good Friday, 29 March 2013, an unofficial and unsupported group bike ride took place in Johannesburg's city centre at 7.15 p.m. Known as Critical Mass, the purpose behind this pedalling phenomenon was to raise awareness about the viability of bicycles as a form of transport and bring people back into the city no matter the amount of wheels. Cyclists were also riding against rape and collecting donations for various rape crisis centres, such as the Jess Foord Foundation Handbag Project.

The monthly fun rides, always on the last Friday of the month and after rush hour, also take place in Cape Town, Durban, Port Elizabeth and Pretoria, as well as in some smaller towns such as Stellenbosch, Knysna and even Sun City.

There's no formal organisation or support, entrance is free and there are no rules - other than to have fun. Cyclist’s ride at a comfortable pace and in a group for safety reasons, using only the left-hand side of the road, to allow cars to pass without anyone being hit and avoid traffic jams.

As this was my first time attending a Critical Mass ride, I had no idea what to expect, apart from cycling 20 km at night, with a half-hour break 10 km into the ride. Arriving half an hour before the ride started, I was pleasantly surprised to see how festive the event was; people were dressed up in crazy outfits, lights were wrapped around many of the bikes and there was music blaring in the background.

Getting into the spirit of the fun ride, my friends and I decorated each other in green paint. As I didn't have anything else that looked the part of Critical Mass, Matt was kind enough to lend me some lights to wrap around myself, thus making me look like a bright Christmas tree and very much a part of the festivities.

Matt went all out by attaching a massive South African flag that had blue lights running down the length of the flag pole to his bike, as well as blue lights wrapped all over his bike.

Lars, was equally creative and wore an afro wig adorned with lights that beamed out from under his bike helmet, as well as lights all over his bike. Jenny had attached her little mascot chameleon, Pascal, to the front of her bike, while the rest of the gang had glow sticks attached to anything and everything they could. Looking the part, we followed the sound of air horns to the corner of De Beer and Juta Streets; the meeting point for the start of the ride. As we approached, I was once again overwhelmed by the scene that greeted us; bikes, helmets, bike wheels and even the wheel spokes were lit up by various coloured lights and glow sticks.

There were hundreds of people of all ages laughing and having a good time as we waited for the ride to start. Then as the clock hit 7.15 p.m., we took off as one, tightly packed and trying our best to avoid knocking each other and causing complete chaos.

As this was an unofficial group ride, the city's roads were not closed, but to keep us all safe, there were marshals riding ahead, beside us and behind us on their motorbikes, to direct the bike and car traffic. The streets were well lit from the streetlights and lights from our group. As we rounded the first corner, we started to spread out, creating the space to ride freely and at our own pace.

I haven't ridden a bike in years, so I wobbled quite at lot in the beginning, almost taking out some innocent fellow riders as a result of my terrible steering. I eventually got the hang of it and started weaving in and out of the group, revelling in my newfound freedom and the cool night air, whilst challenging my friends Matt and Seb to try and keep up with me.

If I strayed from my group of friends due to being a speed junkie, it was always easy to find them again because of Matt's huge and brightly lit-up flag that could be seen from a mile away. The flag was a big hit with the spectators and cyclists, who cheered Matt on as he passed by. But then again, we all received encouragement from the people that thronged the streets, who either clapped, whopped or cheered for us. Adding to this amazing vibe was two people with speakers attached to their small bike trailers, so we had music the whole way.

During the ride, I passed some teenagers who were showing off their mad skills by riding on only their back wheels for much of the way, which was fun to watch! About 9 km into the ride, my legs were starting to turn into jelly from tackling the continuous up and downhills. So I was very relieved to see the cyclists ahead of us stop at the halfway point, where we could grab a bite to eat or visit the various bars.

After resting our weary legs and enjoying a few refreshing drinks, we set off in high spirits. That was until we turned the corner and saw what lay ahead of us; a long and tough incline. Seb and I decided to stick together through this torturous ordeal and use Matt, who was ahead of us, as our motivation to catch up to. What made this climb even more challenging for me was the fact that my bike's gears would get stuck on the hardest levels. Exhausted and unable to ride in a straight line as I slowly cranked my way up the hill, I almost collided with some cyclists who ventured too close to me. My fellow cyclists saw me struggling and cheered for me as they rode past, which gave me motivation I needed to make it up this intense incline. Emerging from the streets, we cycled along Nelson Mandela Bridge, the last landmark and final kilometre of this wonderful ride.

What I really liked about Critical Mass is the camaraderie amongst the riders, who were always stopping to make sure we were still all together and hadn't lost anyone along the way.

The best part of this ride for me was seeing various landmarks and the lit-up buildings in the CBD at night. It was a really beautiful sight! Although Johannesburg is known to be unsafe, at no point did we have to worry about our safety because we were in a big group and the marshals always made sure we were safe from cars and any unsavoury characters.

Overall, Critical Mass is definitely a worthwhile experience and I recommend it to anyone who can ride a bike and is relatively fit. If you don't own a bike, you can hire one from the organisers of the event, which means that everyone has the opportunity to join this wonderful ride. 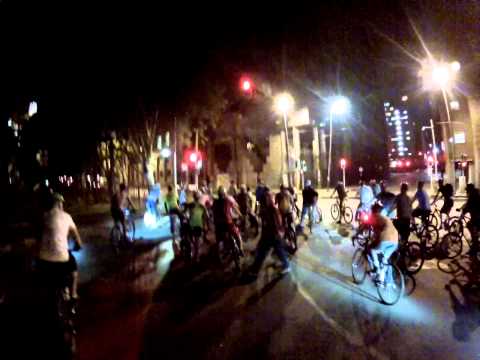