In July I joined the second half of the Silk Route bicycle expedition organised by Tour d’Afrique, a trans-continental bicycle tour company. Approximately 25 cyclists had joined their quest to cycle the famous 12,000 km Silk Road from Shanghai, China, Istanbul, to Turkey. Meeting up with them in Kashgar a few days before they crossed the Chinese border into Kyrgyzstan, it was clear that they had already overcome several challenges in their two-month journey across the enormous country of China. The tough times were not about to end. 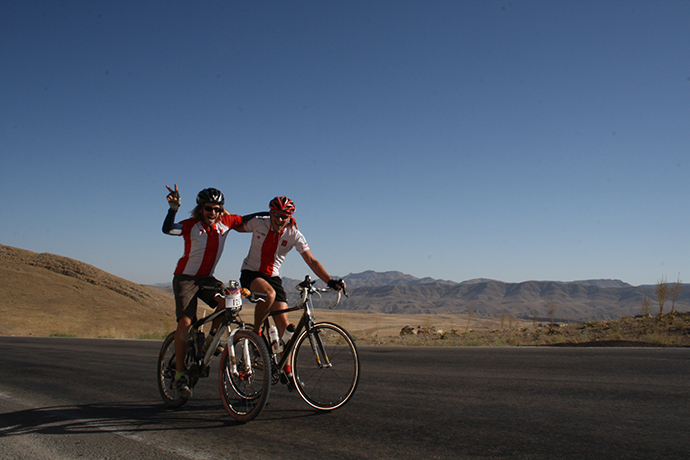 For thousands of years the Silk Road has enticed and enthralled travellers from all over the world. The stories and adventures that surround the route shroud it in mystique and history, and still lure modern-day adventurers to explore this important part of the modern world’s history. For some the appeal is the tales of adventures and following in the footsteps of famous explorers and conquerors such as Marco Polo, Alexander the Great and Genghis Khan; while others are simply there for the challenge of a journey of such magnitude. Whatever their reasons, I can honestly say that travelling on what was once the only trade and cultural link between east and west is worth it.

When meeting the group, I was introduced to some weather-beaten, tired-looking people, who regaled tales of getting lost in sudden dust storms while crossing the Gobi and Taklamakan Deserts, rain storms, intense heat, and the worst thing that any cyclist can think of: riding into a headwind for two straight weeks. The bikes were also a bit worse for wear, a pulverised bottom bearing being the most evident consequence of the almost 6,000 km that had already been covered. It had obviously been a tough two months and now we were heading to the mountains, to cross the Pamir Highway and cycle at altitude for the next three weeks. And who knew what we could expect beyond that?

The hills are alive

Although I have heard of the countries we would be travelling through, I must admit that I didn’t know much about them except that they all ended with -stan and are located in Central Asia. The scenery I expected was what I had seen of Afghanistan on CNN; harsh, dry deserts, and people dressed like Lawrence of Arabia. Once again I was reminded that there’s nothing like travelling to a place yourself, to have all your pre-conceived ideas shattered.

Arriving in Kyrgyzstan, it seemed as though we’d taken a wrong turn somewhere and ended up in the Alps. Instead of the desert landscapes I had expected to find in the '-stans' we were surrounded by snow-capped mountain peaks, rolling green hills and even Edelweiss flowers. Horses abounded and fresh spring water was delivered to our camp by young local boys on their donkeys. As we cycled deeper into this part of the world the scenery remained breathtaking, but it became colder every day, the road surface progressively worse, and the cycling more and more challenging as we reached higher altitudes. By the time we reached Tajikistan the paved roads were more pothole than road and the mountain passes were unpaved, making both the uphill and downhill that much more testing. Despite these challenges we were energised by the sheer, untouched beauty that surrounded us. Vast inspiring expanses enveloped us one day before the sight of Lake Karakul in the distance took our breath away the next, and colourful plates of wild flowers surrounded us a few days later. On a particularly beautiful day we climbed two mountain passes covered with snow early in the morning before descending on the other side. Following the course of the developing Gunt River later that day, the view changed from a small stream of melting snow to a mad rush of water at the bottom of the mountains. It was a spectacular day of cycling and probably my favourite of the tour, as it was sights like these that made all the pain and suffering worth it.

However beautiful the scenery was though, it was the people of both Kyrgyzstan and Tajikistan that made this part of the trip truly special. One such occasion was when three fellow cyclists and I stopped for a snack next to the road and decided to take a stroll towards two yurts (portable, bent wood-framed dwelling structure), about 100m from the road. As we arrived the family welcomed us - complete strangers - with open arms and invited us in for lunch, despite the fact that we could hardly communicate with each other. Inside their lovely warm home we were surprised to see how beautifully decorated a plain old white yurt was on the inside. After eating fresh bread, watermelon and kumis (fermented horse milk) for lunch, we felt satiated and privileged to have experienced a true part of the Kyrgyzstan mountain life … except for the kumis, something I never want to taste again.

A city under siege

Halfway through Tajikistan and in the middle of the Pamir Highway we arrived in the town of Khorog, ready for a well-deserved day off our bicycles. Located on the border of Afghanistan and in the autonomous Gorno-Badakhshan province, it doesn’t take much to spark trouble in this area. There hasn’t been any conflict here for almost 30 years, but the recent murder of an ex-KGB General meant that Tajik government forces had moved in to search for the perpetrators. Overnight, the town changed from a quiet mountain town into a war zone and we woke to the sound of gun and mortar fire the next day. Communication in the area was shut down and we were effectively stuck in a city under siege for four days before vehicles from various European embassies were sent to evacuate us.

The 600 km journey from Khorog to the country’s capital, Dushanbe, took two days as we bumped over rough mountain passes in the vehicles. Disappointed that we didn’t get to cycle the 600 km, ultimately it contributed to the overall Silk Route's experience, as we really got to understand the risks and uncertainty that the ancient explorers were faced with on their travels.

The axis of evil

The fact that we’d already been stuck in one war zone didn’t do much to ease some of the cyclists’ concern about visiting a country that previous US President George W. Bush had labelled as the 'axis of evil'. None of us knew what to expect from Iran, a country that follows Sharia law and is currently the centre of many international debates and discussions. From day one though all our fears were dispersed, as we were welcomed with open arms and invited to picnics everywhere we went.

When cycling or simply walking along the streets we were stopped and many of us received gifts of nuts, fruit, sweets, and chai (tea) from people next to the road, who were worried about our well-being after cycling such a long way. Every local that spoke to us wanted to know what we were doing and why, and all of them were extremely happy to have western tourists in their country. There was no animosity or tension, and only hospitality, friendliness and endless smiles.
Our route took us through forests, past sunflower fields, and Karoo-like landscapes, and all of us were ecstatic that we were back on smooth, paved roads. We camped in some special spots, one of which was an old caravanserai, a building where Silk Road traders used to spend the night with their goods and camels in relative safety from bandits.

If there is one thing I can say about the Iranians, other than they are extremely hospitable, it’s that they know how to party. We arrived in Iran on the last day of Ramadan and for three days straight the majority of the population were having picnics and spending time with their families in parks all over. It was an honour to visit this country and meet some of the most hospitable people on the planet.

Crossing the final border on a trip such as this is always a little special, and it was no different as we made our way into Turkey, the final country on our itinerary. After cycling at more than 4,000 m above sea level a couple of months before, we did not expect to be challenged as much as we were by the mountains of Turkey, which didn’t take us much higher than 2,000 m above sea level. We soon realised, however, that the last few weeks on the road were not going to be easy.

Upon entering Turkey we made our way around Mount Ararat before riding up and down, up and down, and up and down again over hundreds of mountains and valleys. We were gobsmacked by the natural beauty of this part of the world, but we were often left wondering about the sanity of Turkish engineers, the accusations being thrown around becoming more irrational as we grew more exhausted. Did they not know about the concept of bridges or did they just hate cyclists? Suffice to say, there is no such thing as a flat piece of earth in Turkey. At least the scenery and cafes dotted along the road made up for the hard work. Climbing and descending on small, tree-lined, twisty lanes, and being surprised by yet another quaint little village around the corner also made for enjoyable riding all the way into Istanbul.

It’s about understanding the relationship between the east and west better than any history lesson could ever teach me. So why did I do it? To see for myself. To experience. To live.

They have recently launched the cyclist’s definitive bucket list, the 7 Epics. These are seven incomparable and extremely long, bicycle tours that cross entire continents, thread through 50 countries, and circumnavigate the globe, twice, when combined.

For more information on the following topics, please see the interactive application version of DO IT NOW Magazine.
• Travel costs and tips
• Training tips
• Who can do it
• Bike accessories
• Gear/kit choices