For those of you who are not sure what a first descent is, it is when you paddle a new river or section of it that has never been done before. These types of paddling missions are my favourite, probably because you are never really sure what is lying around the corner or below the horizon line in front of you. This unknown is also one of the reasons why first descents are a risky business and require a fair bit more preparation compared to jumping in the car for a paddle down your local section. 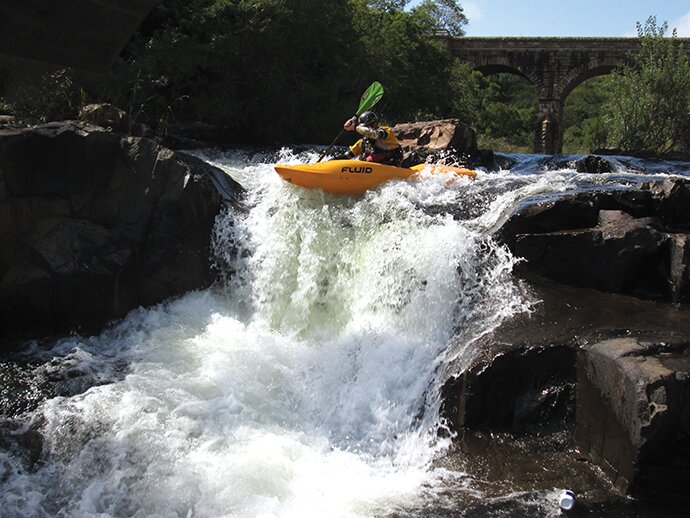 If you have the opportunity to embark on a first descent, then you need to gather as much information as possible before heading out. Luckily for us, this has become a lot easier with all the technology available today. The three key things you want to keep track of are, the distances from start to finish, gradient (how much the river drops over the distance) and route markers (such as bridges, roads or anything that you can use to gauge your progress or lack there off). Thanks to Google Earth this has become a lot easier than in the old days when you only had topographical maps. Don’t get me wrong, a proper map is still one of the most important planning tools as it is a lot more accurate than Google Earth for distance and gradient. What is nice about Google Earth is that you can have a look at a relatively current picture of the area, which makes it a lot easier to find access and escape routes and markers. Once you have all your information, make sure you give copies of all your plans and maps to the people who are going to pick you up. I also recommend giving copies to someone who is not going to be on the trip, so that if you don’t make it out in time someone will, at least, have a vague idea of where to start looking for you.

Possibly the most important part of getting your first descent on is the crew that you paddle with. As you won’t know what the river is going to be like, you must have a crew where everyone can look after themselves and have the ability, skills, training and gear to get out of trouble.

When you pack, make sure you pack a little extra of everything and plan for the worst case scenario. If you are doing something that should take you a day, then take enough food, water and rescue gear along so that if you don’t make it out, you can survive a night on the river. The same goes for your other equipment. Everyone should have a full rescue kit, a well stocked first aid kit and some emergency repair gear.

To finish off our summer paddling season, my mates, MJ and Shaun, and I decided to do a first descent of the Spekboom River. We did all the preparation possible and chatted to some friends who lived close to the section. Without their help with shuttling and getting permission from the local land owners, we wouldn’t have been able to do this section.

After a final check we left our campsite in the dark and in high spirits, and started the drive up the mountain. After a quick coffee with Lelani and Org (our lifesavers in the end), Org jumped in our vehicle and we set off to the put in. We had a little hike in on a railroad and then got onto the water. The river was a bit lower than we had expected after checking the flows on the internet. We knew Org would wait for us at a bridge that was a couple of kilometres downstream, so this gave us the option of getting off the water if we found that our progress was too slow. The river had lots of log jams on the first section and I realised that if there had been a lot more water, we would have struggled to stay alive because this section had a lot of gradient and very little space to escape. We made it to Org and the bridge in good time, and from the bridge down we knew the gradient was going to pick up even more, but we were feeling good so we decided to carry on. 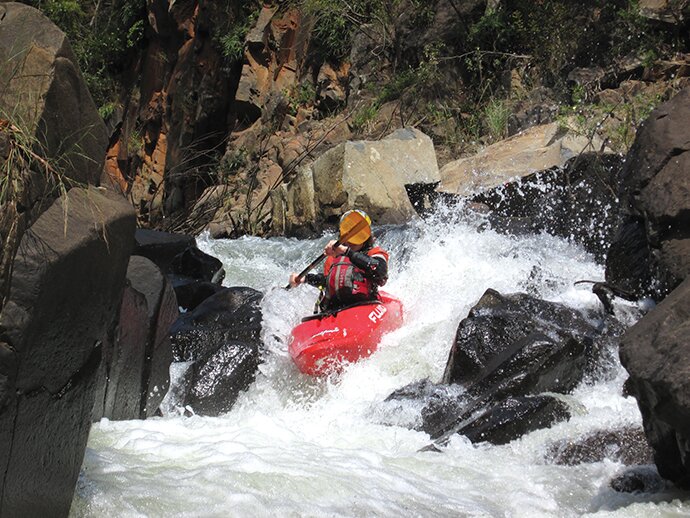 Once we left the bridge, we knew that our only way out was to make it to the end, where we would, in theory, be able to walk a short distance up the mountain to where Org would, in theory, be waiting for us. The first section of the river was fun and we could scout the rapids from our kayaks. However, soon after the bridge we realised that we would have to climb out and bank scout a lot, as we encountered big horizon lines. We found some brilliant drops, slides and waterfalls, but also some seriously deadly rapids. Our progress was slower than we had hoped for due to all the climbing out, scouting and portaging around the deadlier of the rapids.

The river was still very continuous and technical, and we had a couple of rather scary moments where we couldn’t eddy out and had to run some parts blind and not knowing what lay below. Our biggest hiccup came on a section of slides. From the top of the first slide we could see what looked like a decent eddy to catch and check out the second slide. So, MJ went first and I followed. He made the eddy, but it turned out to be super shallow. As I tried to catch it, my boat just slid past MJ and I started heading down the second slide, which ended with a blind horizon line. Realising that I was not going to make the eddy, I swung my kayak around and focused on what I could see downstream of me. All that lay before me was a smooth slide and then it disappeared over a horizon line. I started picking up speed and knew there was no way I could stop before the drop. My only option was to make sure I boofed the hell out it and hope that I cleared any danger that might be lurking below. I nailed my boof and cleared the hole at the bottom. When I turned around, I saw that unless you boofed at the furthest downstream point, you would land in a rock-enclosed death trap. I couldn't see MJ or Shaun, so all I could do was wait until they came into view and then give them a signal to show where to boof. Luckily, they also made it through safely, but it was a good little wakeup call to remind us that first descents are not the time you want to take unnecessary chances.

The rapids kept on getting better and there were only two rapids that were not runnable. Our progress was good, so we decided to take a little break. Shortly after getting back on the river, Shaun's kayak started taking on water. After inspecting his kayak, we found a huge crack in the hull. By then he couldn’t paddle more than a couple of metres before it would start to sink. This was a big problem, as we still had a lot of distance to cover and there was no way Shaun could hike out from where we were at that time. We made a plan as best we could and after some time-consuming patch work, we started heading downstream again. Our patch-up job didn’t do very well against the rugged rocks and the crack got bigger. We couldn’t lose another hour trying to patch up the boat again and we'd run out of material to patch it with - this is why you always want to prepare for the worst case scenario, unfortunately we hadn’t. Our only option was to paddle and empty Shaun’s kayak every couple of minutes. This started eating into our time and our progress was very slow.

We finally made it to where our take out road should have been at around 16h00 and we were all tired. We decided our best bet would be to walk up the mountain and then find our bearings to locate Org and our vehicle. I have hiked out of many places with my kayak; probably the most famous walk out in South Africa is the Thrombi hike. For those who know that beast of a walk, walking out of Spekboom made the Thrombi feel like a stroll on the beach. Two hours later and with the light fading rapidly, we made it to a point where we could call Org, and not long after we saw the lights of his approaching vehicle. We made our way to the vehicle in the dark, tired and bruised, but happy as hell to have discovered this beautiful piece of river.

If you ever want to paddle the Spekboom, make no mistake, you need to be a comfortable Grade 4+ creek boater with a precision boof and very competent in swift water rescue because this river is very technical, it has many seriously dangerous siphons and boulder chokes, strainers and the odd sneaky undercut - where MJ discovered his unhappy place. In my opinion this has to be one of the top creeks in South Africa.

So go and find something new out there, but do it safely. Prepare properly and make sure you pack an extra bag of good humour for the trip because you never know what is coming up next.