They came from far and wide; some as far afield as Colorado, USA, and Cape Town, to the small town of Nigel, for the inaugural Jozi2Kozi mountain bike ride that took place from 25 to 31 August 2012. This was not a race, but rather a journey of discovery, a migration of the soul for the strong and fit, and one that spanned 748km and took seven days to complete. 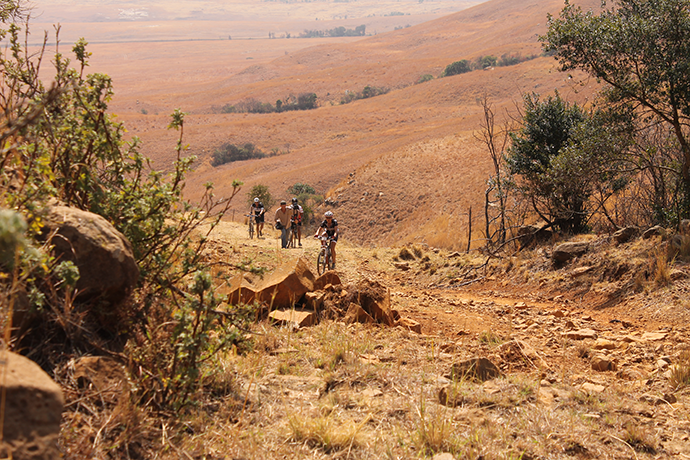 There was an air of expectancy and excitement amongst the riders as they readied themselves for the start. After being welcomed by a Zulu 'imbongi' or praise singer, riders were cautioned of the challenges that lay ahead of them to their ultimate destination: Kosi Bay on the warm Indian Ocean bordering Mozambique.

The first day was all about rolling grasslands, mielie fields and corrugated gravel roads - all 120 km of them - until we reached the Grootdraai Dam Boat Club outside Standerton. Luckily there was a strong tail wind, thus ensuring that the first day was a manageable and enjoyable one.

After filling up on boerewors and pap for breakfast, the riders were loaded onto ski boats and ferried across the dam, before wading in the icy, muddy waters to get to shore. More corrugated gravel roads followed, but this time they led towards the small, isolated town of Amersfoort. Passing through this century-old 'dorpie', cyclists encountered the first of the so-called 'undulating hills'! Their progress was further hampered by a strong headwind and for many it was a welcome relief to finally take shelter and rest their weary bodies at the Country Trax Academy, where they devoured a delicious evening meal and listened to live, local 'boeremusiek'.

This was a challenging day with rocket-fast descents and heart-attack ascents, including Bitch Hill. A prize of a weekend in Mozambique was on offer to anyone who managed to ride up it without stopping. The men in the group were sorely exposed when this hill was conquered by female rider Nataly, and so it was with shattered egos that everyone began referring to Bitch Hill as 'Nataly’s Hill' (with the deepest respect to the skilled Nataly!).

Rocky hairpin descents down Puff Adder Pass had riders screaming in joy and terror as they made their way into the tiny German hamlet of Luneburg. Here they listened to a German 'Oompah Brass Band' practising a selection of foot stomping, thigh slapping German tunes, and were served traditional Eisbein and Jagermeister. Some of the participants were having such a great time that they stayed up until the wee hours of the morning, singing German war ballads with the farmers (and paid for it dearly a few hours later in the blistering heat and on the steep inclines).

Quietly leaving Luneburg along a short section of tar, cyclists were starting to feel the strain of the long days in the saddle. The day's route meandered along forestry tracks and through the uMkhunyane Game Reserve, where riders gratefully plunged into a sparkling stream to cool down.

Back in the saddle, dusty corrugations led to the Klipwal Goldmine and a lightning-fast switchback descent into the Pongola River valley, which borders the Ithala Game Reserve. Crashes were inevitable on the loose gravel surface that made turning treacherous, and the paramedic was kept very busy patching up riders. Reaching the Pongola River crossing, there were armed game scouts from Ithala waiting on the opposite bank to ensure the riders safe passage across. But even with the game scouts on alert, nervous comments could be heard about the presence of unseen crocodiles, rhino and elephants. Needless to say, it was a quick crossing for everyone, and even the paramedic and his BMW motorcycle made it across the river in double quick time, albeit with much cursing, splashing and laughter. From there, the riders headed to the main camp at Ithala for a well-deserved rest. With a few cold ones enjoyed over another excellent dinner and a fantastic sunset, it was the perfect end to an adrenalin-filled day.

Seriously steep climbs, long winding descents and bumpy cattle paths were the order of the day as the speeding riders entered rural Zululand, dodging grazing cattle and goats in their path. This was a long, hot and tiring day, interspersed with stops at the local spaza shops to guzzle down ice-cold Cokes and answer the locals’ incredulous questions: “You rode from eJozi? Haaibo! Why don’t you catch a taxi?”

Passing through rural Zululand was an eye-opener for most cyclists, who commented on the locals' simple but hard way of life that is devoid of the frenetic chaos that comes with living in the city. Arriving at sundown to a gathering of several hundred people at Mr Mafuleka’s kraal, the riders were greeted with much jubilation and singing. Despite being dog tired, they tucked into the ceremonial wildebeest served for supper with gusto, while delighting in the traditional dance routines before slipping off to bed.

As dawn broke to the sound of hundreds of cockerels crowing in harmony with the bellowing of Nguni cattle, riders were already making their way to the privately-owned Zululand Rhino Reserve. After a briefing about conservation issues and sticking closely together, they proceeded towards Mkuze and encountered lots of plains' game, but luckily (or maybe not!) no lions, elephant, buffalo, rhino, or leopard.

Rolling gravel roads led to the Mkuze taxi rank and a surprise! The bikes were loaded onto the roof top of a waiting bus and everyone jumped in. After crawling up an extremely narrow pass to the top of the Lebombo Mountains, in the smoke-belching local bus, the bikes were offloaded and riders raced down into Maputaland towards Lake Sibaya. Jeep tracks, single tracks and very loose sandy paths tested the cyclists’ skills and sense of humour on this unseasonably hot day, with temperatures reaching 38°C. The last 2 km stretch to the lake was through deep sand and thick forest, forcing many of the participants to get off their bikes and push. But the effort was well worth it when they sat down to dinner, at the edge of a pristine lake and under a full moon.

This was the shortest day (yeah, but we all know Murphy!) consisting of 83 km of flat roads interspersed with sections of loose sand. Well, not quite. There was a lot more loose sand than expected and much of the time was spent falling headfirst into the sand, amidst loads of jesting, and cursing of the race organiser (myself).

After passing through the bustling border town of KwaNgwanase, there was a flat section of tar to the turn-off to Kosi Bay Mouth and then a little sting in the tail for those who thought they’d finished with the sand. To get to the magnificent viewpoint overlooking the century-old fish traps, estuary and Indian Ocean, there was a short section of thick sand to put the cherry on top of a wonderfully challenging journey through our country.

Kosi Bay Mouth, forming part of the isiMangaliso World Heritage Site, was the finishing point. And what an achievement it was for the riders; some had never ridden more than 50 km before, some had only bought their mountain bikes two weeks before this event, some did it on single speeds, some bonded deeply with their partners, and some bonded less deeply with their partners…

But what made this event extra special is that it was not just about the spectacular ride, it was also about the spirit of sharing humanity (ubuntu). Ubuntu is the focus of Jozi2Kozi's charity drive, and is about the cyclists actively and spontaneously engaging with local communities en route. As such, a daily highlight was the awarding of the ubuntu prize to those who had given out the most gifts of Lucky Star Sardines and blankets to the needy in the local communities along the route. These heart-warming gestures took place at schools, rural crèches, at water and washing points, and to grateful herdsmen along the route.

All in all, the Jozi2Kozi was a huge success and a personal achievement for many riders. So don't miss the 2013 event and a journey of discovery of epic proportions.

The 2013 Jozi2Kozi event will take place from 25-31 August. A similar route will be followed except with more single track and jeep track across farmers' lands.

There are three Jozi2Kozi 2013 events to choose from:
1. Jozi2Kozi Challenge - this is for the racing snakes and endurance riders.
2. Jozi2Kozi Experience - this is for those who want to take it a little easier. Riders in this group will start about 25-30 km into the route so that they have time to ride, explore, and still finish in time to enjoy the overnight venues. A typical day's ride will be 70-80 km.
3. Jozi2Kozi 4 sho - this is for those who don’t have the time but still want to enjoy this part of our wonderful country by taking part in a four-night, three-day ride from Ithala Game Reserve to Kosi Bay, in either of the above mentioned categories.
For further information and entry details visit www.jozi2kozi.co.za.