One Man, One Pram - for the African Penguin

Perhaps only superseded by constant reminders to always wear clean undies and warnings against picking my nose under the light of a full moon, my parents also tried to instil in me the importance of introducing oneself to strangers. To escape the wrathful glare that only a mother can wield, allow me to at least be able to tick one of these boxes. 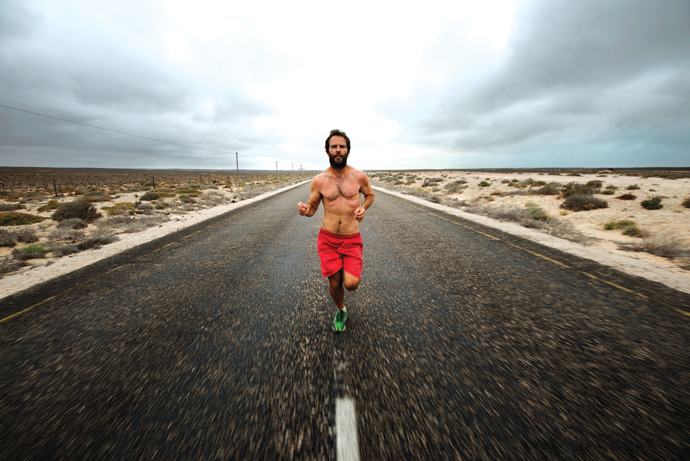 I am 5’6” with a talent for growing body hair. I underperformed at school, while nurturing a schoolboy crush on my French teacher. I spent several years wandering around Asia and Europe doing a variety of odd jobs. I have had my heart broken countless times and in-between teaching scuba diving for the last seven years, I developed a nagging feeling that I should have been doing something more. In short, an underwhelming résumé about a reasonably normal person.

That nagging feeling, however, was the reason why I ended up alone in Walvis Bay on 18 October 2012, at the start of a 2,700 km run down to Port Elizabeth, armed with a pram filled with goodies and a whole lot of ignorant optimism.

How I ended up there, specifically, was as a result of a) three lunatic bird watchers - Vernon Head, Mark Anderson and my own dear dad; b) a conservation organisation called BirdLife South Africa; c) an endangered bird known as the African penguin; and d) a German with a beautiful smile. The plan was to run through the desert to Port Elizabeth, following the natural range of the African penguin in an awareness and fund-raising campaign. That was pretty much the extent of my pre-planning for this run.

How I ended up in this situation, generally, can be traced back to glorious Antarctic landscapes, the Ba aka (people from the jungles of the Central African Republic), Sol Kerzner’s Bahamian resort and the love of a young Mosselbay-ian. That, however, is a story for another time.

And so I set out on a misty morning in high spirits, accompanied by a group of enthusiastic runners, along a tarred road. The runners disappeared after 20 km and the tar followed suit about 100 m further on. It was to be the last bit of tarred road for almost 900 km.

The reasons for taking a pram were simple. Firstly, I couldn’t afford to buy a car. Secondly, having all my gear in a pram made it a safer option than having to rely on a back-up vehicle, which may or may not have broken down at an awkward moment. Thirdly, I was trying to simplify my life.

I’m not anti-technology and will freely admit that I enjoy the fact that humankind has evolved to a state where milkshakes come in a myriad of flavours. I do feel, though, that our lives are too cluttered. Cluttered with billboards, radio and television advertising, peer pressure and, by no means any less significantly, all those flyers that one is offered at robots. Running with a pram reduced my life to 30 kg.

Running through deserts and back roads also gave me the chance to think or, as was more often the case, not think at all. Instead of the endless rushing to exercise, to work, to socialise, I was quite literally able to stop and smell the Namaqualand daisies. Clichéd as it may sound; this project was as much about the journey as the destination. The manner in which one’s senses come alive when away from cities is hard to explain. Sunsets aren’t simply ‘beautiful’ or ‘amazing’, or even ‘not as nice as the one yesterday’. Much like trying to explain just how sickening a broken heart feels, words only get one so far. The rest is experienced through our senses. The sunsets of the Kalahari were some of the most incredible that I’ve ever experienced, which begs the question: if you spontaneously start blubbing in the middle of a desert sunset and no one hears your sniffling, are you still ‘cool’? They weren’t necessarily the most beautiful because Gauteng smog can be very creative, but they were some of the most complete I've seen. Each sunset, and by implication, each experience was accompanied by two or three other senses, to the extent where sunsets could be described by their colours, as well as by the smells of flowers or the ocean hundreds of kilometres away. It is an incredible experience to ‘see a smell’ or ‘hear a taste’ and be able to connect with the world around you in such an intimate way.

Travelling with a pram did require a bit of thought though. Due to the size of the pram and running in an environment where water is historically a bit of an issue, it wasn’t possible to carry both water and food. But there again, any food would have had a very short ‘use by’ window when subjected to blistering temperatures of 47°C by 11h00. Therefore, restocking in the desert, unless one has a certain arcane knowledge, can be tricky. To overcome this dilemma, I lived on a liquid diet for the first 1,600km. Breakfasts and lunches were a hearty 400 ml ‘meal replacement’ shake, while dinners were a more elegant affair comprising a 400 ml ‘whey protein’ shake. The rest of the meals comprised water drawn from whatever windmill I happened to pass en route. The only downside to all of this was that I was limited to three flavours of supplement (my choice) and the water became hot very quickly and tasted of plastic after a couple of hours in the sun (sort of my choice, but only because I chose to do the run).

On a journey like this, it’s not just one’s relationship with the environment that develops. Travelling as freely (feel free to interpret that as meaning ‘slowly’) as I did meant that I had the time and opportunity to meet some of the locals in the towns that I passed through. And in South Africa, if you can understand Afrikaans it certainly helps, we have some of the most wonderfully entertaining characters. The Northern Cape is littered with personalities of the most engaging kind, so much so that after a stopover in Garies, Oom Tobie and his band Unity ended up playing at my sister’s wedding three weeks later. And while I am not naïve about the conditions that living in South Africa presents to us, in 2,700 km, spread over three months of sleeping in the veld and under the road in storm-water culverts, I was never once threatened or felt uncomfortable. The fact that my first opportunity to take a bath only presented itself about 1,200 km into the run - there is only so much that wet wipes can do - may have helped shield me from potential villains. But I do believe that there is more goodness in this country, and world, than we allow ourselves to believe.

Over the past 18 months, I have run more than 8,000km for conservation efforts, and if all goes to plan, I will begin a run across Canada this year in aid of polar bears. After that, who knows? The world is a pretty big place and my pram is getting itchy spokes. The distances may sound daunting, but when you take it one day at a time, it’s achievable. It’s very easy to do this because, from a running perspective, I wake up every day knowing that the route I take is unique. That each step is a one-way ticket to the next day’s undiscovered challenges. And from a traveller’s perspective, I get to visit new places, meet all kinds of people and experience the natural beauty in a way that is closed to the typical tourist rushing past in a car, bus or plane. And as an inhabitant of this planet, I get to enjoy my passion and use it to benefit a greater cause.

I am by no means a world-class athlete. I have received numerous sympathetic shakes of the head from those freakishly talented dwellers of the Rift Valley, and have had my running style compared to an epileptic octopus. Yet this run from Walvis Bay to Port Elizabeth has helped to raise awareness of the plight of the African penguin, and maybe, just maybe, in 40 years time when my knees have surrendered and my hip joints have been replaced by titanium technology, I will be able to hobble down to the beach in Simon's Town in my cardigan, with the arm-support of my grandchildren, and still be able to admire these cocky little creatures.

BirdLife South Africa very quickly realised the extent of my accounting abilities and happily took control of any and all donations. How much we raised and will continue to raise, I can’t honestly say, but then again, money is only half the story. Money buys us time. Simply by making people aware – we’re depleting their natural food stock, we’re polluting their habitat and destroying their breeding grounds - and by making people care, we have taken the first step towards the survival of the species. To do this was simple. I took something that I get an incredible amount of pleasure from – running – and I used it to benefit the community.

So you don’t have to be a super-fit, muesli-munching bunny hugger to appreciate just how special this world is. We all have passions and skills that can benefit others, be it running, baking or teaching.

Giving a little bit of one's time and imagination means we all possess the ability to make our communities, countries and the world a better place. So get out there and decide to do something differently, but don’t waste time, DO IT NOW.