Quantum Leap. Lessons and the Sequel!

My cell phone rings and I see that it’s one of the teams on top of Oorlogskloof Mountain. Team Lala obviously found one of the few locations where there is sketchy cell reception. It’s now 10h00 and the third morning of the inaugural Quantum Leap; 270 km of in-your-face, no nonsense, true expedition-style adventure racing. 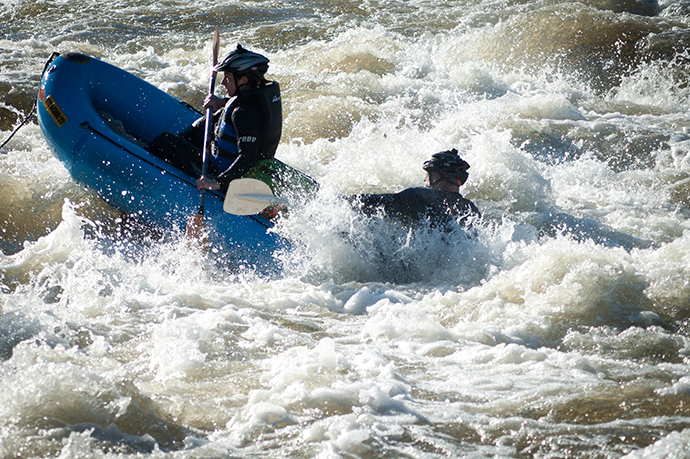 I’ve been able to monitor all the teams’ progress on my laptop since the start of the race because they carry Guardian tracking devices - an essential item in this rugged, remote, and extremely isolated terrain. Although the area is unforgiving and brutal, it is indescribably stunning! And the more remote and devoid of human intervention, the higher the risk, but with that comes unrivalled wilderness adventure.

Team Lala’s tracking-device battery had gone flat and the last time I had received a signal from them was at midnight, at CP16; the last checkpoint before descending the mountain to T6. Like the other teams, they had already spent more than 20 hours on this ancient landscape of Oorlogskloof Mountain, or War Mountain if you translate it, and I had expected them to get off the mountain around 03h00, well within the cut-off time of 10h00.

Answering my phone, a very tired team member told me they were lost. Having tracked them to CP16 the night before, I was surprised to hear this. I could hear that morale was low, and they were intent on getting to an escape route and exiting the race, even though there was still enough time to finish the race on a shorter route. Trying to work out where they were, I asked them to look at the hiking trail map they had been given at the start of the race, along with the other maps. "What hiking trail map?" they asked. “Oh, we thought it was marketing material and left it behind!” they replied, with regret, disappointment, and frustration in their voices. This was the nature of the Leap! It turns out they were near CP16, but on a track higher up and parallel to the actual track where the CP was positioned in a kloof. Sleep deprived, and with a cold front moving in, they literally lost the plot - pun intended! Somehow, they convinced themselves that they were on the right track and just continued walking - back in the direction they had come from, many hours before. Close to CP14, which is about 12 km in the opposite direction, they managed to find cell reception, and hence the call.

The challenges faced by teams included making shrewd route choices, finding their way in the dark with no track to follow, negotiating grade 4 rapids on the freezing and full-flowing Doring River, selecting the correct times to rest for an hour or two, and staying focused and cohesive as a team! It was not meant to be easy, and I had spent a considerable amount of time planning, plotting and spinning this complex web to achieve this. I’d also experienced this gruelling route firsthand when planning it, and knew it would be no push over when I ran out of water, had to carry my mountain bike for hours on end in search of rideable tracks, scrambled up and abseiled down overgrown kloofs, valleys and steep cliffs - all in the middle of summer - and was confronted by a black spitting cobra in Oorlogskloof!

The pre-race briefing had actually started a few weeks before the event took place - some teams just didn't realise it. Many photos, clues, and other details were posted on Quantum Adventures' Events FB page, and although not critical, some of the images and narrative could certainly have assisted with route planning and other decisions.

During the race briefing, various other clues and hints were given out, and it was made clear that teams who made shrewd and decisive route choices would be rewarded. One such team was Team WCAD, who made a bold route choice after a 90 m abseil and exited the deep gorge via a steep crack in the cliff face. Once Team WCAD reached the top of the cliff, they covered the 6 km on a footpath and open terrain in less than 90 minutes! They leapfrogged Team Cyanosis and closed the gap on Merrell Adventure Addicts to within an hour! The teams that stayed in the gorge took up to six hours to cover 6 km in dense bush and technical terrain, with the Oorlogskloof River and high cliffs hugging them on either side. In total, only three of the 18 teams chose this quick route.

Lessons to be learnt

None of the teams had a flawless race, and that is totally in line with traditional adventure racing. In my experience, I've seldom seen a team that's had a perfect race and generally it’s the most 'consistent' teams, who make the fewest mistakes and nail one or two big navigation moves, which do well.

The biggest single reason why teams did not complete the Quantum Leap was due to poor navigation; the by-products being low team morale and wasted time. There are too many teams who 'think' they can navigate and this view is often based on their previous experiences at races where navigation may not have been as challenging, or offered a few or any route choices. Navigation is an exact science and once you understand the formula and interaction between a compass, map, altimeter, and the terrain, you almost have everything you need to successfully navigate any terrain, be it night or day! Focus and application are just as important, and this comes with time and repetition. A great way to understand the many nuances of navigation is to carry a 1:50000 topographic map with you wherever you run, paddle, mountain bike or explore. Comparing the features around you to what’s on the map will create a 'focussed and sharper' interpretation, and before long you will be able to read the map much quicker and memorise it a whole lot better.

Other reasons why teams struggled on the route and/or withdrew were:

• Poor team dynamics. Train with your teammates well before the race so you are all on the same programme once it’s time to take the Leap.

• Dithering along the route or in transition. When one person gets hot or cold and removes or add layers, the rest of the team should consider doing it at the same time. Alternatively, the rest of the team keeps moving while that person catches up. In other words, the train should never stop!

• Transition troubles. Before reaching a transition, the team should decide on what a reasonable amount of time to spend there is and who will do what.

• Not looking after the navigator in transition. Remember that the navigator needs to plan the next route, change maps, and make corrections whilst the rest of the team is happily replenishing. So don't forget about their needs.

• Not assisting the navigator. The whole team should be alert and aware of features on the ground that might assist with route decisions because the navigator, who is focussed on the overall route, could easily miss lateral features, especially at night when visibility is poor.

Try this on a mountain bike leg

Here is a basic tip that will assist you on a mountain bike leg in any weather, day or night. Before starting the leg, break the route down in small chunks. If you have a distance measuring device, measure the distance from the start to the next significant landmark next to or near the route, and then mark the map with an arrow or similar indicating that landmark. From that landmark keep doing the same along the route; every 4-10 km is good. Since all team members 'should' have an odometer on their bike, the team can now safely move along using this tip to ensure they don’t pass these landmarks unnoticed.

Unfinished business! Those were popular words uttered at the end of the 2012 race from some teams. And so the vastness of this undiscovered and unexplored ancient land invites the inquisitive to keep on exploring by entering the Namaqua Quantum Leap in August 2013! Remember, this is not an ordinary race! So if you dare to take on this challenge, be prepared to learn things about yourself that you did not realise you possessed.

Entries for the 2013 Namaqua Quantum Leap opens on
1 February 2013. To enter, visit www.quantumadventures.co.za.