For some, 70.3 might be an odd, meaningless number, but for triathletes it's a number to aspire to because it's the distance in miles of the Half Ironman. This incredible event is where competitors test themselves on a 1.9 km swim, 90.1 km bike and 21.1 km run, with the professionals finishing in just over four hours and a red carpet awaits every athlete at the finish. 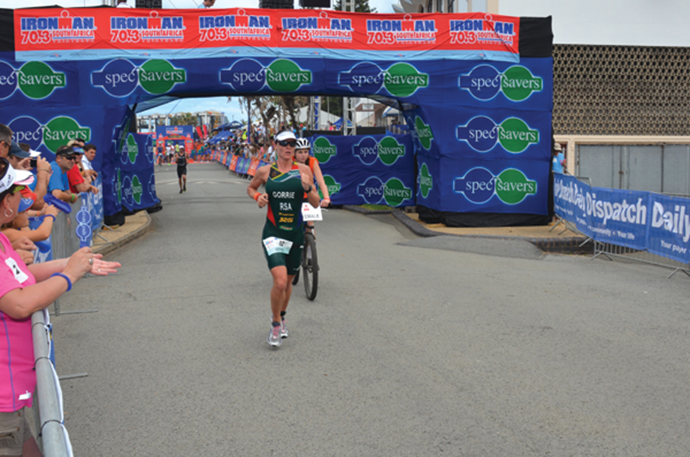 The sixth edition of the Spec-Savers IRONMAN 70.3 South Africa, held at Buffalo City in East London on 20 January 2013, was all the more significant as it was the biggest 70.3 event to date, with 4,000 entries. As a result of its growing popularity, this event now ranks as one of South Africa’s most sought-after and prestigious races on the tri-calendar.

For the spectators, it's a very special and festive occasion, and the conclusion to months of support, hours of motivation and days of frustration and encouragement to get their loved one ready for this tough race. And for the athletes, it's a reward for all their hard work, commitment and many sacrifices made in the months leading up to the event, especially considering that the event takes place less than a month after Christmas.

Registration started early on Friday morning at the Garden Court Hotel and the Expo area was packed with all kinds of goodies the participants would need on the course, as well as must-have souvenirs to commemorate the race and proudly show off at a later stage. And all around you, you could feel the mix of excitement and nervousness of the athletes. Orient Beach also came to life as the athletes started doing their final prep on the Friday and Saturday, either going for a swim, ride or run along the beachfront.

There was an impressive number of professional entries, which meant that the 70.3 Ironman titles were going to be hotly contested and would make for great spectator viewing. From South Africa, well-known competitors on the men’s side included Kent Horner, Freddy Lampret, Gerhard De Bruin, Terrence Lowe and Michael Cannon. In the ladies, the serious contenders were Jodie Swallow, Natasha Gorrie, Dianne McEwan, Lucie Reed, Susie Hignett and Jeanni Seymour. The ladies race was expected to be very competitive, with two-time defending champion Jodie Swallow looking in great shape, and Lucie Reed and Susie Hignett both highly motivated to make a challenge for the top podium spot.

By Sunday, the time for preparation, talk and speculation was over; the time had come for the triathletes to prove their worth and in doing so, determine who would be the 2013 70.3 Ironman winners. Weather conditions were excellent as the competitors made their way to the beach area for the first leg. Despite the early morning start, the music was pumping and the spectators were already getting into the spirit of the event as the Pros set off on the first wave at 6:45 a.m. followed by five waves, each starting 15 minutes apart. To put into perspective how fast the pros swam the 1.9 km course, the third wave hadn’t even started by the time they were back on the beach. Marko Albert clocked the fastest time in just over 23 minutes. On the ladies side, it was Jodie Swallow who led the charge from the start and exited the water in just over 25 minutes.

The bike leg proved to be a real test of strength and character, as the athletes took on the challenging climb to the Berlin Bridge, the highest point of the course. Bart Aernouts, from Belgium, powered away to smash the bike course in just over 2 hours and 15 minutes, to give him a 2 minute lead over Ronnie Schildnecht, from Switzerland. Kyle Buckingham was the first South African to complete this leg, in 2 hours and 24 minutes. Jodie Swallow once again comfortably led in the ladies race to finish in 2 hours and 38 minutes.

Bart continued to crank it up on the run, setting a very fast pace that would prove too much for the rest of the field. He crossed the finish line to claim the coveted 2013 70.3 Ironman title in a blistering time of 04:03:53. Bart was followed by Ronnie Schildnecht in second in 04:06:23 and Tim Don in third in 04:10:40. There was no catching Jodie Swallow, who crossed the line in 04:34:30 to clinch the top podium position and her third consecutive win. The battle was then on for second and third places, with Lucie Reed chasing down South African Natasha Gorrie. Everyone was waiting with baited breath to see who was going to be the first to sprint down Lower Esplanade Road, but in a surprise move, Susie Hignett (UK), who was in fourth, passed them both with only a few hundred metres to go and snatched second place in a time of 04:43:38. Third place went to Lucie Reed, from the Czech Rep, in 04:44:19.

The rest of the afternoon was filled with athletes conquering their personal goals and running along the red carpet with smiles from ear to ear. Hats off to everyone who finished this epic race and good luck to all those who are competing in the full distance Ironman on 14 April 2013.

The 1.9 km swim started on the beach in front of the Orient Theatre. The first buoy was 300 m away from the beach and in the middle of the harbour entrance. From there, swimmers turned left towards a second buoy that was 700 m away, then left again to a third buoy 200 m away, and a final left to a fourth buoy 500 m away before heading back to the beach.

The 90.1 km bike leg of the race started at the back of the Orient Theatre and proceeded down Esplanade Road, up John Bailie Road, past Buffalo Park Cricket Ground and then through the town on the North East Express Highway. From there, riders turned onto the N2 National Highway and headed to Berlin Bridge, 45 km away from the start, before returning on the same course. This is one seriously hilly course, with some saying it’s the second toughest Ironman 70.3 bike leg in the world.

The 21.1 km run leg consisted of two laps, starting from the transition at the Orient Theatre. Athletes first had to run to the pier, then follow the lower Esplanade Road as it flowed into the main Esplanade Road. From there, they made their way down the beach towards the golf course, through the park area at the end of the beachfront, onto John Bailie Road and then right into and up Turnberry Avenue (probably the steepest part of the run, known as Bunkers Hill) and down Glen Eagles Road to the corner at Galway and Epson Road and back again.

Deciding to do the Ironman 70.3 was not difficult. A friend and I chatted about it, then we decided that it sounded like a grand idea and before we knew it, we'd said yes. However, this decision had not really taken into account that we were both over30, and that I was sort of a runner (having only run one 21 km race about five years ago), I'd only done two cycling races in my life (both being the 94.7 Cycle Challenge and on a mountain bike) and I had yet to attempt a swimming race, never mind in the sea.

Not one to back down from a challenge, I started training in October. At that point, I was able to run a comfortable-ish 3 km, but I was very nervous to get on a 'skinny wheel' bike and after four laps in a 25 m swimming pool, I thought I was going to pass out. Training on my own was a mission, especially as I had NO clue about how or when I should be doing what. That's also when reality hit home and so too did the fear, doubt, frustration and 'oh dear, what was I thinking?' After doing my first two triathlons; the BSG Triseries (600 m swim, 20 km cycle and 5 km run) at The Islands Estate in Hartbeespoort on 21 October; and the ELEVEN Sun City (1.5 km swim, 40km cycle and 10 km run) in Sun City on 11 November, my husband suggested I join a training group and get a programme. Thank goodness I did!

I joined up with Triafrica and after receiving my first training programme, I can clearly remember thinking 'where do these people get the time to train?' By then it was mid November, work was hectic and finding the time to train seemed impossible, especially if I wanted to see my husband now and then. But it was possible, and the best thing I’d done for myself in a long time. Through all the frustration, worrying and nearly quitting, I had the support of amazing friends and family who believed in me and that made me want to do this race even more. I kept on training through December (complaining quite a bit about the logic of doing such a big race in January) and by the time it was race day, I was feeling great. I’d lost a few kilos, toned a few long-lost muscles and was the fittest I’d been in a very long time! This was my first real challenge for a while and I decided that this one was going to be different; I was going to change my focus and just enjoy the experience.

All the way from Jo'burg to East London and up until race morning, I could feel the nerves nibbling away at my insides, but I had a mission - NO negative thoughts. And it worked. My goal was to make all the cut-off times and finish the race. And that’s what I did, and I enjoyed every second of it. The swim was hectic over the last 700 m as there were huge swells, but I remained focused, kept going and survived. The bike leg was challenging (I should have done more outrides!) and I wasn't sure how to pace myself, but I made the cut-off. I loved the run! I ran up all the hills; the vibe and encouraging words from the spectators kept me going and I had the most chilled out 21.1 km ever. I finished in a time of 7 hours and 15 minutes, tired but exhilarated and more than an hour faster than cut-off, which was awesome!

My advice to anyone thinking about taking part in this race is that it's tough, takes a lot of hard work, requires a lot of time and sacrifices from you and your loved ones, but you can do it and you should do it. And when you do, enjoy every minute of it. Just remember to stop under the arch at the finish, pose for the photographers and savour that moment.