A childhood dream became a reality after a few good bottles of wine at a braai with some buddies. That dream was to travel around the world. There and then the 'rules' for the adventure were set: all five continents must be covered from coast to coast, between the last two Olympic Games (Beijing 2008 and London 2012), and only by public transport! Hannes Potgieter joined me for the first leg, the rest of the time my only company was fellow travellers and locals. 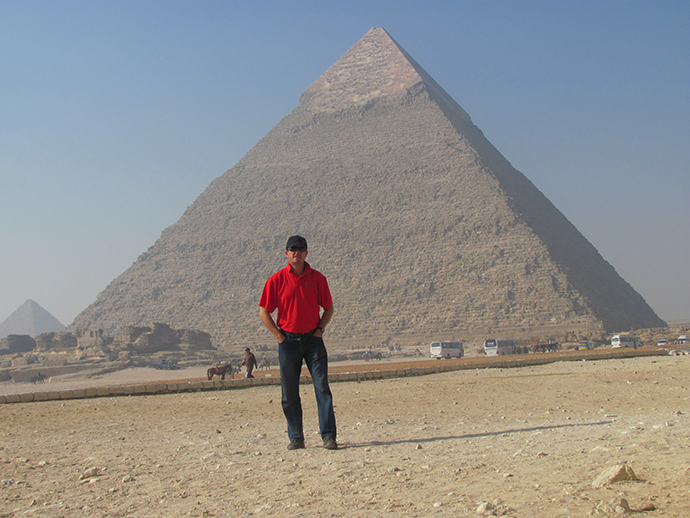 Seeing as Europe is the smallest continent and one where we could mix up the means of transport with some cycling next to the incredibly scenic rivers on offer, we decided to make Europe our first destination. So Hannes and I converted our old mountain bikes into makeshift touring bikes, which we assembled on arrival at Frankfurt Airport.

Our plan was to cycle through the picturesque countryside to Meins, where the Mein and Rhine Rivers converge, then paddle north on the dramatic Rhine Gorge, with its fairytale castles lining its banks, to Koblenz, and then switch to the Mosel River. The ride was very rewarding as we went from the one little village to the next, but the adventure came to a sudden halt when I was hit by a car in Luxemburg and had to be rushed to the hospital to get patched up.

After a day of recovery for me and my bike we were good to continue on towards the lovely city of Menz, where we took a high-speed train to Paris, the world's most popular city destination. After a few days of sightseeing around this grand old city, we worked our way to Dieppe and caught an overnight ferry across the English Channel to Eastbourne, a large town and borough in East Sussex. Back in the saddle, we worked our way to the lovely seaside town of Brighton, with its beautiful architecture and impressive colonial-style piers that stretch a few hundred metres into the sea.

An easy 45-minute cycle through the lush, green countryside took us to London and the many old routes down the Thames. Cycling around London is amazing because its previous Mayor had promoted cycling as a means of transport. One of the slogans that stuck with me was, ‘The weather is always good for cycling - you might not be rightly clothed’. After a few fine days in the British capital we headed back to the mainland by bus and then took a ferry, via Calais and Brugge, to Amsterdam - the most cycle-friendly country in the world. The bicycle was the perfect way to explore this city and its flat countryside made it easy to get around. With the first of five continents completed, we disassembled our bikes and hopped on a bus to Frankfurt. So far, our journey had taken 28 days.

Next up was North America, which I reached after a 20-hour flight via Dubai, and the logical place to start was in the financial powerhouse, New York. Arriving in the Big Apple, I managed to cover more than 20km on foot the first day and made a few discoveries of my own: Central Park is all but a flat piece of land, Times Square is a triangle, and Madison Square Garden is oval!

I reached my second destination, Washington, by bus and was blown away by the size of the Mall, a 19.1-mile long lawn that is anchored at one end by the Lincoln Memorial and on the other by Capitol Hill and all the memorials. The different museums, such as the Air and Space Museums, are regarded by many as perhaps the biggest and best of their kind in the world, and the fact that it is all free was very pleasing to the budget!

Greyhound was running a seven-day bus pass special for US$100, so I picked a few cities and would sleep either on the bus or in bus stations. My first stop was in Boston. Setting out on foot, my explorations through this pleasant city took me from Harvard Campus all the way to the Freedom Trail, a 2.5-mile, brick-lined route that leads you to 16 historically significant sites - each one an authentic treasure - including museums, meeting houses, churches, burying grounds, and its historical harbour. Taking an overnight bus to Montreal, I joined the colourful festivities in Quebec, where it's made abundantly clear that this part of the country is French. Bidding Quebec au revoir, I headed to the Niagara Falls, on the Canadian side. Niagara Falls is the collective name for three waterfalls (Horseshoe Falls, American Falls and Bridal Veil Falls) that straddle the international border between Ontario (Canada) and New York (USA). I spent the entire day here, totally captivated, and can understand why the falls are world renowned for their beauty. Moving on, I made my way past the Great Lakes to the motor capital, Detroit. Here I was shocked to discover that the city has lost almost a third of its population as a result of the recession in the motor industry. Contrary to Detroit, Chicago was vibrant and energetic, with an impressive skyline that can give New York a run for its money any day. My one-week special pass expired as I arrived in the town of Seneca, in Kansas, and where I hooked up with my brother for a week and enjoyed the American rural life and 4th of July celebrations; definite highlights of this trip.

Leaving the charm of the east behind me, I hitch-hiked to the west coast; a decision that opened the window to a number of weird and wonderful experiences. Making my way to San Francisco, via Denver in the Rockies, the sober Salt Lake City, and the not so sober Las Vegas, I was picked up by BIG truckers, as well as people fresh from jail and everything in-between. After 40 days of hard travelling I finally reached San Francisco, with its trolley cars, Alcatraz, and the Golden Gate Bridge, declared one of the modern Wonders of the World by the American Society of Civil Engineers - a perfect end to this east-west leg.

Turning south, I boarded a Greyhound bus for Los Angeles and San Diego, and spent a few days there visiting various famous landmarks, including the 'Walk of Fame' and Olympic Stadium, before crossing into Mexico - without even stopping at customs. This was the start of a much different world.

My first few days here saw me cross the barren and imposing mountain range of Sierra Madre Occidental on a Mexican Intercity bus to Los Mochis, where I took a train through Copper Canyon, a canyon system in the Sierra Tarahumara, in the south western part of the state of Chihuahua. This 12-hour journey is through some of the most breathtaking scenery imaginable and, for me, it has got to be one of the most scenic train trips in the world. The train continued further south with stops at Guadalajara and Mexico City, and I hopped off here to visit the imposing Mayan Pyramids on its outskirts. I was really impressed with the Mexican food, some of the best I had sampled on my travels so far. I had arranged to meet a friend in Veracruz, so I made my way to the holiday capital of Mexico, to spend a week in the Presidential Suite of a resort hotel that is owned by friends. After months of travelling on a tight budget, this was a very welcome alternative.

Central America was incredible, and although tiny on a map, it packs in more diversity than any similar-sized area on the planet. Some of the highlights included a visit to the Turneffe Islands on the coast of Belize, which boasts the biggest sinkhole in the sea and is a diver’s paradise. A real gem was the two weeks I spent in the town of Antigua, in Guatemala, where I attended a Spanish school, to get a better understanding of the Spanish language (with limited success), and then visited my first active volcano just outside the town. From here, my travels took me on nerve-wracking rides on 'chicken busses' into the jungles of El Salvador and Honduras, before taking a ferry across Lake Nicaragua to one of the world's most popular eco-tourist destinations, Costa Rica. Here I was joined by my good friend Mariaan Kriel, who won the bronze medal in the 100 m backstroke at the 1996 Summer Olympics in Atlanta, and we enjoyed a few relaxing days in the sun, on a gorgeous white beach, swimming in the clear water, and refining my backstroke technique ...

The last real landmark of note was the Panama Canal, an 82-kilometre ship canal in Panama that connects the Atlantic Ocean (via the Caribbean Sea) to the Pacific Ocean. What makes this canal so significant is that the ships are lifted and lowered by a set of locks up to a level of 23m above sea level between the Atlantic and Pacific Oceans, by means of gravity water from a nearby river - it's a hugely impressive piece of engineering. And with this, my Central American leg ended: one hundred days after leaving left New York.

In the next issue, my travels by public transport take me to South America; the final leg of my journey in the Americas, and the completion of two of five continents. And then it is on to the Indian subcontinent, which is said to present an extraordinary spectrum of encounters for the traveller - I couldn't wait to find out for myself.