Dani Pedrosa The Man Behind the Visor

Interview: DO IT NOW | Photos: www.hondaproimages.com

Even though Dani Pedrosa is one of the smallest riders in MotoGP, just 160cm tall and weighing in at 51 kg, he's proven time and time again this season that he is the man to look out for. His riding career is littered with wins, podiums and championships, and he's currently (at the time of going to print) lying in second place in this year's MOTOGP standings, with his sights firmly set on the top podium position. The Repsol Honda rider took some time out to answer a few questions. 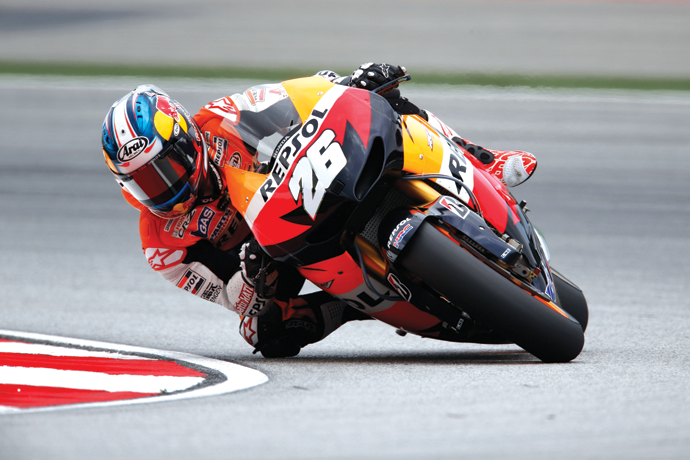 Q: 2012 is turning out to be a great season for you. What do you attribute your success to; the new bike or have you found some extra motivation?
A: In racing everything counts. We have a good bike, the transition from 800 cc to the new 1,000 cc bike has been very positive and we did a good job in winter with the bike. I am healthy, and I've had no injuries to recover from for the first time in a long period. I was able to prepare myself physically and the season started out ok. We have been able to reach a good level from the beginning and have kept the results consistent; winning more races in the second half of the season.

Q: Ever considered SBK?
A: No, I’ve never thought about racing in another championship other than this one.

Q: What will you do after MotoGP?
A: It’s too early to say. I’ve signed another two-year contract with HRC to race for the Repsol Honda Team. I feel good and I think I’m in the best time of my career, so I have no thoughts about the future yet. I like to take things step by step. You never know how you will feel when you retire. Maybe I want to be connected to this world (MotoGP) and help kids, like Alberto Puig did with me, or just leave and start a completely new life. I’ve haven't thought too seriously about it yet.

Q: Most riders move from team to team as soon as their contract is up, yet you have remained with Honda from day one. Why?
A: I’ve been with Honda for my whole racing career, and I’m very proud of it. I have had other options to move, and the team has also had the option to take on other riders; it’s normal. But at the end of the day, Honda and I have stayed together for so many years because we wanted to; it’s been the best option for both. I’m perhaps one of the riders with the longest history with Honda and it makes me feel very proud.

Q: You've had teammates come and go in the Repsol garage, who have you enjoyed riding with most and why?
A: I would say Casey (Stoner). He’s been the strongest teammate and also the best one. We respect each other a lot and push each other to the maximum on the track, and this is very good for the team.

Q: Alberto Puig, your manager, has been with you since the start of your GP career. Do you have any other mentors or people you look up to?
A: I’ve had some other people in the team help me to grow as a racer, but Alberto is my one and only mentor.

Q: Would you change anything in terms of your profession?
A: Sure, I would change some things, as I guess everybody would do in their own job. But I enjoy racing, this is my life and my passion. Sometimes I feel that the championship has somehow lost the balance between racing and promotion.

Q: Any plans of moving from two to four wheels?
A: I like cars, but not to drive competitively. I have had some experiences as a co-driver with some experienced world rally car racers and really enjoyed it, but it’s just for fun.

Q: In your everyday life, do you get around on a motorbike or car?
A: Living in Switzerland, I usually use a car to get around in, especially in winter because it’s very cold there. Sometimes I use my scooter bike, weather permitting.

Q: Besides motorcycling, what are your other passions and/or interests, and what do you do to relax?
A: Another sport I enjoy a lot is windsurfing in summer time. It’s a similar kind of feeling that you get on the bike. I also love going to the cinema to watch some good movies or just have fun with my friends, who I sometimes miss during the season.

Q: What is your favourite food and refreshment?
A: Everything my mum cooks, I would say! I like pasta, a good steak, and fish; a mix of everything. I drink water, but I’ve discovered the wine culture recently and I also enjoy it when I have a relaxed dinner at home with friends.

Q: What is your favourite place to visit on holiday and why?
A: I don’t have much time for holidays in the summer break, so I don’t like to take long flights. I just want to relax and any place next to the sea is good for me.

Q: What message do you have for young aspiring riders?
A: I would say to them that they have to feel passionate about racing and enjoy the sport. Talent is very important, but you also need passion and hard work to reach a good level and survive in a very competitive world like this.

Dani’s passion for motorcycles began, like many of the top current riders, when he was a small child. At the tender age of four he rode his first motorcycle, an Italjet 50 with side-wheels. He received his first racing bike at six, which he used to race with his friends.

Dani's first taste of real racing was at the age of nine, when he entered the Spanish Minibike Championship and ended his debut season in second place, scoring his first podium finish in the second race of the season. The following year, he entered the same championship, but health problems prevented him from improving his results and he ended the season in third position. By the age of 12, Dani had won the national championship in his native Spain, but a lack of funds almost curtailed his promising career before it had begun. However, a search for fresh racing talent in Spain, headed by former Grand Prix star Alberto Puig, gave the youngster an opportunity to prove himself on a bigger stage, and he grasped it with both hands.

Dani made his professional debut at 16, and at just 19 he became the youngest person ever to win the 250cc Championship. In 2004, he went on to successfully defended his title and become the youngest double world champion. But Pedrosa wasn't done earning 'youngest' records. After taking the step up to the MotoGP class in 2006, Pedrosa became the youngest Spaniard to ever win a MotoGP race, and the second youngest of any nationality. Pedrosa earned his first MotoGP win in just his fourth attempt, at 20. And since then, he's never looked back!