For better or for worse in southern Namibia

As an avid biker, Zelda has been on numerous trips through Africa delivering mosquito nets to the rural areas, as well as to the well-known Bavianskloof, Die Hel, Swartberg Pass and many others. In fact, such is her passion for bikes that she worked as a motorcycle saleslady so that she could enjoy even more time in the presence of her ultimate love in life. So it came as no surprise when she made it very clear to me that she could not marry me if I did not own or ride a bike. 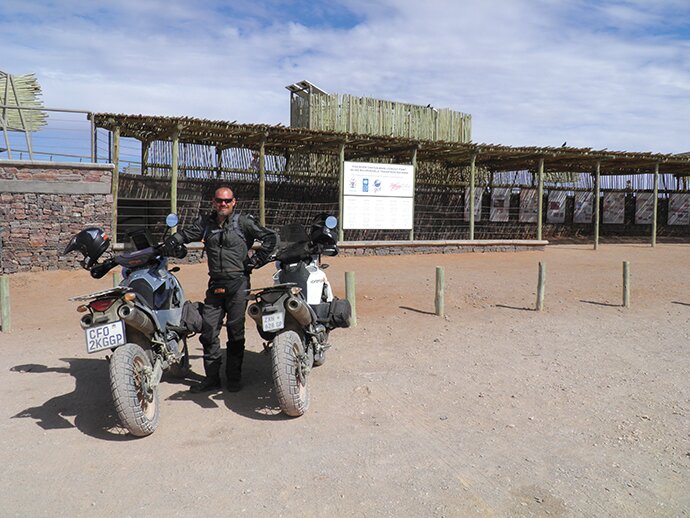 Says Zelda, "Frans knew me by the slogan, 'Maybe some women aren't meant to be tamed. Maybe they need to run free until they find someone just as wild to run with them’."

As a youngster, I enjoyed many years of riding smaller 175 cc and 250 cc motorbikes and bundu bashing through the forests and up the Outeniqua Mountain close to my home. But, as the years went by, my two wheels were replaced with four, and then I met Zelda. From the moment I set eyes on this six foot blonde Amazonian goddess, she stole my heart and I knew she was the one. Knowing what her 'requirements' would be to take our relationship to the next level, I didn't hesitate for a moment and sold my trusty old Isuzu and joined Zelda on 'the dark side'. So when the time came to pop the question, and she asked me to tell her the three words that every girl wants to hear, I whispered, "I ride KTM."

Incorporating our love for our KTMs and the great outdoors into our wedding theme, we arranged the most beautiful picnic wedding at the magnificent Walter Sisulu Botanical Gardens. After an incredibly special day spent with our family and friends, Zelda and I pulled off on our bikes and were hugely excited about our exhilarating and adventurous honeymoon in the south of Namibia - and so the start of our life together as husband and wife began.

We had a limited budget and little time, so we opted to tour the southern part of Namibia because I had travelled far and wide in the north of Namibia, but I’d never explored the southern parts. After seeing some extraordinary pictures of this beautiful, desolate place, I knew this was where I wanted us to start our life’s journey together.

Our itinerary included Augrabies, Ais-Ais, Hobas and Keetmanshoop, returning home via Upington. I’d done my homework for this trip well before hand and most of the information garnered came from fellow Wilddog Forum members’ trip reports and magazine articles. We used a Galaxy Tab 7 as our GPS and this was fitted to my bike inside a waterproof cover. On this I plotted all the waypoints and interesting sights to stop at. It also served as media storage via an extra memory stick, allowing us to download and store our photos daily. But just to be safe, I printed some basic Google maps, telephone numbers and contacts, and stored them in a waterproof cover.

As we were travelling alone, I thoroughly checked and prepared our motorbikes beforehand. I also had two of almost every tool we could possibly require, so that each bike was fully kitted out and independent of the other. To this I added a comprehensive medical kit, as we would be travelling on roads far from the nearest ambulance or help, as well as extra water in camelbaks, extra fuel and oil. There's only so much space on a dual bike, so we were only able to take the minimum of clothing for both cold and hot weather. The Namib can get REALLY cold sometimes when you least expect it and we experienced both extremes during our trip.

We arrived at Augrabies Campsite in the dark and in a heavy thunderstorm. Fellow campers took pity on us and insisted that we wile away the storm, with a beer, in their tent. It is this spirit of generosity that makes camping so enjoyable!

Our friendly neighbours invited us to join them for a drive into the park (no motorbikes allowed), as they were going geocaching, a free, real-world, outdoor treasure hunt in which players try to locate hidden containers, called geocaches, using a smartphone or GPS and can then share their experiences online. This activity turned out to be really interesting and informative. The scenery in the park and the canyon were spectacular, even more so than the Augrabies Falls, especially at sunset.

We left Augrabies for Ais-Ais via Pofadder, passing through the Onseepkans Border Post to Karasburg. The road between Pofadder and Onseepkans was hell, even on our very capable KTMs! Once in Namibia, we were easily able to maintain an average speed of 80 to 100km on the dirt roads, which are usually better than the average tar road in South Africa. After stocking up on food and fuel in Karasburg, we continued to Ais-Ais. By midday, the temperature had soared and we welcomed the thunderstorm that we encountered to cool us down. Cruising along, we came across a Nile monitor lizard that was lazily making its way across the road and shortly after that, I almost got taken out by a springbok. Fortunately, I braked just in time and missed him by less than a foot in front of me. It was a very close call!
Ais-Ais was beautiful and the Ais-Ais Campsite and ablutions were spotless. Our only complaint was the loud music played by some South African 4X4 enthusiasts until very late and the lack of fresh food in the shop. However, the restaurant was fully stocked.

Due to the loud South Africans, we decided to move to the much more peaceful Hobas Campsite. This campsite was much smaller, but beautifully set in the middle of nowhere. We were now pretty much alone and loved every moment of it. From there, we explored the majestic Fish River canyon and then meandered over to Canon Roadhouse for breakfast. This place is a MUST! The restaurant is filled with antique cars and memorabilia from a bygone era and the food is fantastic! The remainder of our morning was spent leisurely eating and drinking coffee at this amazing setting, and chatting to two crazy Spaniards who were cycling all the way from the north of Namibia to Cape Town. That evening we treated them to a real South African braai at our campsite and introduced them to the marvel that is braaied marshmallows. They were suitably impressed and could not get enough! 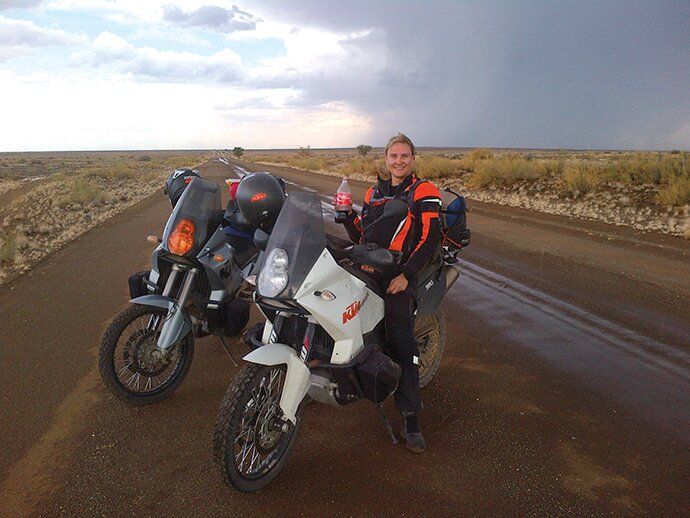 We stopped off for a last memorable breakfast at Canon Roadhouse before making our way to Keetmanshoop, the biggest town in southern Namibia and the administrative capital of the Karas region. En route, we passed gemsbok and a small herd of springbuck, and then stopped at the Naute Dam, the third largest dam in Namibia, and marvelled at the sight of so much water in such a desolate area!

As we approached Keetmanshoop, we noticed a cold front rolling in and quickly stopped to stock up on food before heading to Quivertree Forest Rest Camp. With rain threatening, we decided to book ourselves into a rondawel and indulge in a bit of luxury. After unpacking, we spent some time looking at the cheetahs before the heavens opened and it fell unabated for the entire evening.

Early the next morning there was a lull in the rain, so we used this dry spell to visit the quiver tree forest before packing up and setting off for Upington. We drove the entire day in pouring, freezing rain and every single river we passed was in flood. It was surreal to see Namibia so wet! We were forced to stick to tar as the gravel roads had turned to mud, and the bakkies and cars were slip sliding all over the place. We stopped at a backpackers in Upington to try and dry out as best we could before heading home the next day.

The wind blew hard all morning and we were hard pushed to stay in the middle of the road at times. We opted to break off the N14, as traffic was getting hellish after the long weekend, and drove through the quaint town of Ottosdal via Delareyville to Klerksdorp. A well-deserved coffee break at Potchefstroom was our last stop before hitting the last stretch home to Jozi!

We arrived home at 19h00, having covered a distance of 3,200 km on the bikes, our honeymoon had been an adventure of note and we had lots of new friends and experiences to add to our memories!

• Bike papers and passports are required at the border, along with entry fees. We opted for a small border post and were processed quickly.
• Watch out for pickpockets and children in the smaller towns when stopping. Opportunistic theft is random here; the rest of the place is as safe as can be though.
• Fuel is available almost everywhere.
• Food is also available in most places, but the quality of fresh produce is not always reliable. Ais-Ais is a perfect example, so always stock up in the ‘bigger’ towns and take as much with you as possible. Restaurant food is almost always excellent, but at a price.
• We didn’t book, as it was before the Easter weekend, but always have a back-up place in mind and their contact details.
• Most importantly, have an open mind and enjoy the open road!