When I think about the five days Xen and I spent in Mozambique, in March, I can still vividly recall the wonderful feeling of tranquility and see the beautiful, calm aquamarine ocean and pansy shells that decorate the beach - it's a must for everyone’s bucket list. 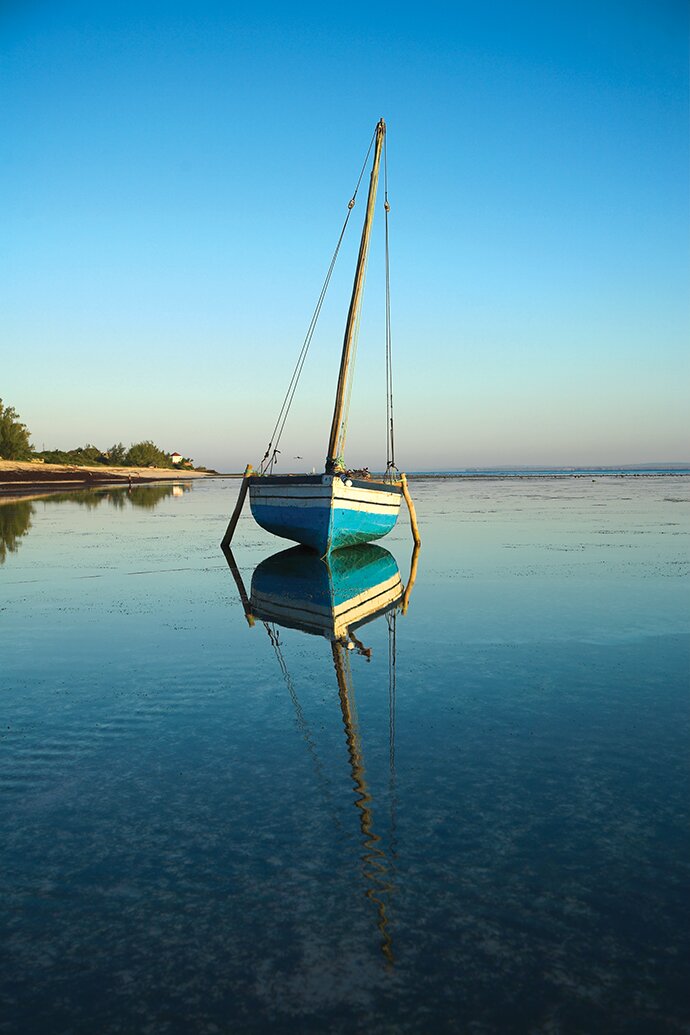 We departed from OR Tambo International Airport, in Johannesburg, and flew to Vilankulo (formerly Vilanculos) via the town of Inhambane. It's an incredible experience to fly in a Bombardier turboprop aircraft because it is able to land quickly and you have the feeling of being very close to the tarmac. After clearing immigration, we were met by Ernesto, the local representative from Dugong Beach Lodge, and where we would be staying for five days. When we were last in Vilankulo, back in 2006, cyclones had ravaged the town so we were curious to see what the town looked like now. Driving through this coastal town was a joy, as there were new buildings being built and a lick of paint had been applied to others. The Dona Ana Hotel had also risen from the ashes and looks magnificent, with occupancy scheduled for June. Arriving at the water’s edge, we had to wade through the water to board the boat, which took us on a 50-minute cruise to Dugong Beach Lodge. Once we had docked, we were warmly greeted by the singing and dancing hotel staff and handed a welcome drink to enjoy. Against this backdrop, our first sight of the island and its surrounds left us breathless.

Dugong Beach Lodge is situated within a 36,000 ha Vilankulo Coastal Wildlife Sanctuary on the southern Mozambican coast. It boasts a colorful bird life, busy little geckos that left interesting patterns on the sand and the most incredible marine life swimming below the jetty. Our first night was spent relaxing on the sea-facing private deck of our luxury chalet, from where you could actually see, and hear, the bigger fish chase the smaller fish in a game of cat and mouse in the moonlight.

Dugong Beach Lodge is named after the dugong, a large marine mammal that looks rather like a cross between a rotund dolphin and a walrus, reaching up to 3 metres in length. Its body, flippers and fluke resemble those of a dolphin without a dorsal fin. Its head looks somewhat like that of a walrus without the long tusks. Dugongs can be difficult to distinguish from dolphins in the wild, especially as they often occur in muddy water.

The largest dugong population typically occurs in wide, shallow, protected areas such as bays, mangrove channels, and the lee sides of large inshore islands, a habitat that is commonly found off Mozambique’s central and northern coastline. The largest dugongs in Mozambique are believed to be in the Bazaruto Archipelago, to the north of Dugong Beach Lodge. The local people believe that dugongs can see deep into the human soul and will only appear to those who are kind and warm hearted. We were not privileged to see one, but we still hope to see a dugong one day.

After a delicious breakfast the next day, we took a boat trip to Magaruque Island, the third largest island in the Archipelago. As we cruised along, the water was so clear that we were able to watch a huge leopard stingray glide along with us. Extensive tidal flats on the landward side create a mosaic of sapphire, indigo and aquamarine with the tides, and the area boasts 2,000 species of fish including the much sought-after marlin and sailfish. The water surrounding the island is fantastic for scuba diving and snorkelling, as you can actually swim to the coral reefs - no boat is needed to take you there! We spent the next two hours snorkelling on the reef and although the visibility was not great, we saw several reef fish, including the trumpetfish, lionfish, clownfish and coachman. A mild current took us in a southerly direction, enabling us to enjoy the amazing sea life as we slowly drifted along. 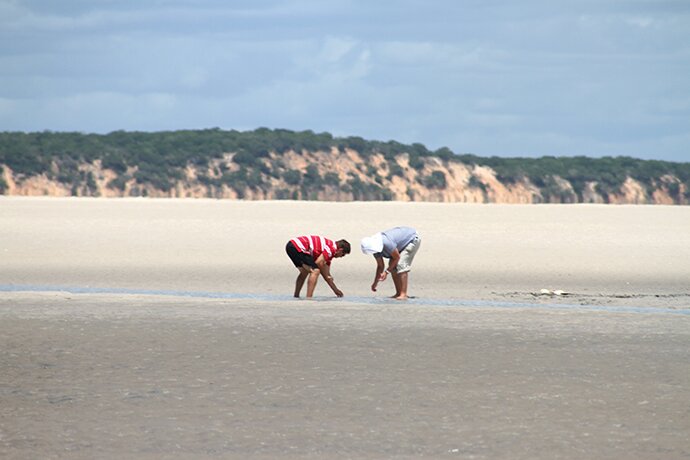 Our next destination was Bangwe Island, situated at the end of the San Sebastian Peninsula and one of the five islands comprising the Bazaruto Archipelago.

With little on the island apart from sand dunes, it was a secluded and idyllic spot for a little relaxation. Whilst there, we were treated to a picnic lunch that included the most delicious crayfish, calamari, salads, and homemade buns. The rest of the day was spent taking it easy under the umbrellas and swimming in the crystal-clear ocean.

For the remainder of our stay, we indulged in waking up late, reading, swimming in the ocean and the hotel's infinity pool, enjoying the most delicious cuisine and playing the local board game Tsoro or Tchuva, as well as sampling the local rum called Tipo Tinto. We marvelled at the bird life, as this area is bird lover’s paradise and home to large flocks of flamingos, pelicans, crab plovers, and egrets, to name a few. We took leisurely walks through the thick, lush mangroves and on the powder-white beach, and were kept entertained by the ghost crabs that would scuttle away from us at the speed of lightning and then disappear into the sand before our eyes. The sand also provided a canvas for gastropod molluscs to create their intricate artwork on, amongst the beautiful pansy shells that decorated the beach. Interestingly enough, the pansy shell is a living creature and not a shell at all. The locals collect shells to generate income by making various items like lamp shades.

One of the many highlights on this trip was a sundowner cruise on a typical dhow. We followed the channel south to the Marape fishing village, where we witnessed the most exquisite sunset as it peeked through the mangroves. We met some of the locals and were introduced to their locally-grown produce, including cashew nuts, monkey oranges, granadillas, paw paws and coconuts. The village is mostly used during the fishing season and it's very primitive. A hole in the ground with black water, which looked terribly dirty to us, was their source of fresh water and used to wash their clothes and for drinking once it had been boiled. They proudly showed us their open air church, consisting of only two pieces of wood that had been modified into chairs and a simple pulpit. The guide introduced us to cassava, a vegetable with a hard and starchy white flesh and an important source of carbohydrates. It forms the basis of cassava flour, which is made by the villagers. The cassava contains a strong poison (cyanide) that needs to be eliminated during the preparation of the flour. This is done by cooking or fermenting the vegetable, then cutting it into small pieces and drying it on a dry rack in the open before it is finally ground into flour.

On our last evening, we went on a nature drive through the sanctuary. Although we didn’t see any giraffes, gemsbok, zebras, spitting cobras, pythons or puff adders, we had the most incredible bird’s eye view of the peninsula. We saw the smaller islands on the opposite side of the peninsula, as well as the islands of Bazaruto, Magaruque and Bangwe. An unexpected treat on the drive came from the hotel staff, who spoilt us with our favorite drinks and the most delicious peri-peri calamari and spicy giblets. Thereafter, we took a hike to a lookout and watched another exquisite sunset before making our way back.

As our holiday in paradise drew to a close, the staff once again sang and danced as the boat left the hotel, and Ernesto explained to us that they were wishing us goodbye and safe travels, and to greet the people at home. Not long after setting out, a school of dolphins joined us, much to our delight. The skipper stopped the boat so we could watch the dolphins perform their antics for a while, but due to the changing tides, we had to continue on to Vilankulo. As we approached, we could see the local fishermen pulling their boats across the sand banks towards the water, while others snorkelled or caught fish and crabs. For the locals, it was just another day in the office as they tried to make a living from the sea.

It had been the most glorious five days, filled with many beautiful memories - and it is definitely a destination that requires another visit.

• Health precautions: There is a risk of malaria, so prophylaxis is recommended.

• Currency: US dollars can be used at most of the hotels or you can exchange currency at airports or banks. Credit cards are becoming more acceptable at major hotels and restaurants.

• Language: The official language is Portuguese. Local languages include Tsonga and Makhuwa. English is spoken in most of the tourist areas.

• Climate: The best time to visit Mozambique is from May to November. The peak times (Christmas, New Year, Easter and school holidays) are more crowded. The rainy season is from October to March, with possible flooding and impassable roads. The dry season (April to September) is cooler and more pleasant. There is no time difference between South Africa and Mozambique.

• Telecommunications: There is mobile phone coverage in all the main cities and most provinces.

• Tipping: This is usually expected and anything between 5% and 10% is customary. Over tipping spoils the relationship between the tipper and service provider – so rather show your appreciation by personally thanking the staff for good service.

• Travel guide: A handy book to carry around with you is the Getaway Guide, Mozambique by Mike Copeland.