During December 2012, Xen and I travelled through Zimbabwe and Zambia, with Xen's two brothers, and had the most memorable time visiting a number of fantastic game reserves, as well as some of the sights on offer (read more about this in the May issue of DO IT NOW). But after being on the road for 20 days, the weather turned poorly, the heavens opened and the rain poured and poured. After a few days of wet tents, flooded roads and a serious lack of sunshine, we decided that enough was enough and it was time to head home. To make the trip back a little more interesting, I suggested we return via the Central Kalahari Game Reserve, where we would hopefully enjoy some sunshine and a drier landscape … and what an amazing detour it turned out to be. 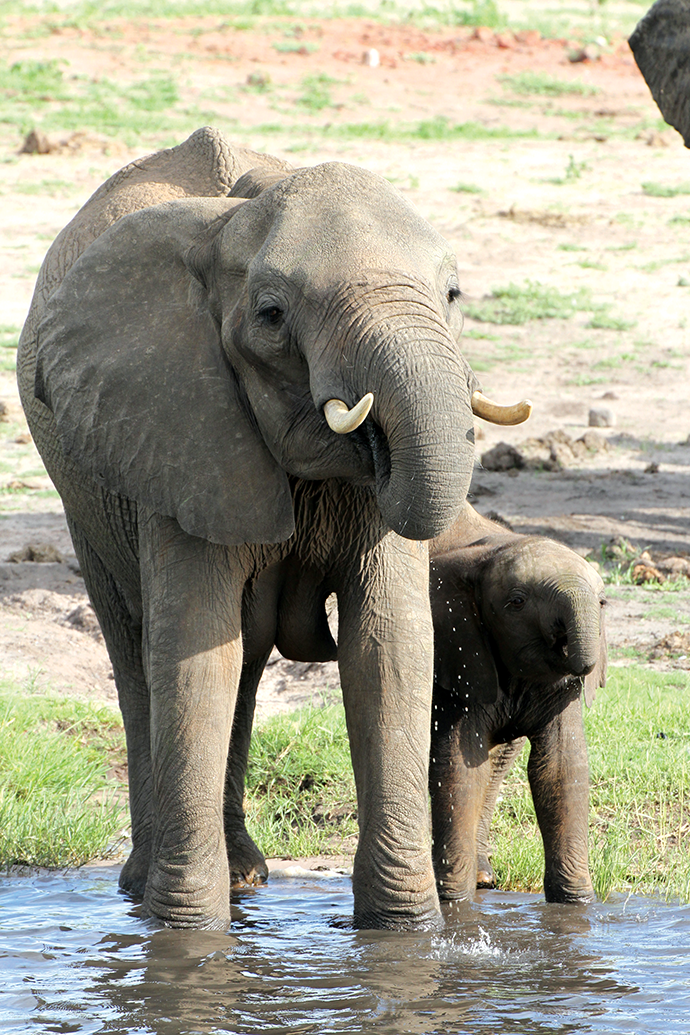 Our first stop was the magnificent Victoria Falls, which was all the more spectacular in full flood due to all the rain. When you see the majestic fall of thundering water over the cliffs and the most beautiful scenery surrounding, you can appreciate why it is one of the seven natural wonders of the world. The view literally takes your breath away, mesmerizes you and we momentarily forgot about the discomfort we'd experienced over the past few days.

After a visit to the informal curio market, where you'll find the most amazing hand-carved trinkets, tribal arts and crafts, pottery and beautifully woven basketware, we made our way to the ferry, at Kazungula, for the crossing of the mighty Zambezi River. Whilst here, we were approached by a 'runner', who was very eager to assist us with getting through passport control, for a hefty fee of course, and he also wanted to exchange US Dollars for Botswana Pula at an outrageous rate. Thankfully, Xen knew what the exchange rate was and after an apology from the runner, a more reasonable deal was concluded.

The ferry from the Botswana side did not have enough passengers making use of the facility, so we had to wait approximately 30 minutes before it finally arrived. We kept ourselves busy by chatting to a lady that was selling fruit, and treating the children to some sweets amid shrieks of pure delight. After disembarking on the Botswana side, we cleared customs and drove to Chobe Safari Lodge, to purchase tickets for the Chobe sunset cruise. Unfortunately, the boat was fully booked so we headed to Marina Safari Lodge, where we secured the last four tickets. We have been on Chobe's boat cruises on several occasions and would recommend it to anyone, however not on New Year’s Day. It was a huge disappointment as there were several local youngsters on the boat who drank too much and were extremely vocal, which spoilt the cruise for our brothers who had anticipated a peaceful and quiet game-viewing cruise. Despite the rowdy bunch, we still got to see the usual suspects; crocodiles, hippos, puku and a group of elephants playing in the mud.

The next morning, we drove in pouring rain to Nata, where we filled up with petrol. A few kilometres before Maun, we turned towards Boteti on the road to Rakops. It started to rain again and I remember thinking to myself that I've never seen so much water in the area. After refuelling at Rakops, we headed for the Central Kalahari Game Reserve's (CKGR) Matswere gate. I was certain that we would never make it because the road was covered by huge stretches of water and we had to drive axel deep for 100 m at a time. After some careful navigation, we eventually made it to the gate.

The CKGR is the largest, most remotely situated reserve in southern Africa and the second largest wildlife reserve in the world, encompassing 52,800 sq km. CKGR is unique in that it was originally established (in 1961) with the intention of serving as a place of sanctuary for the San, in the heart of the Kalahari (and Botswana), where they could live their traditional hunter/gatherer way of life, without intrusion, or influence, from the outside world. 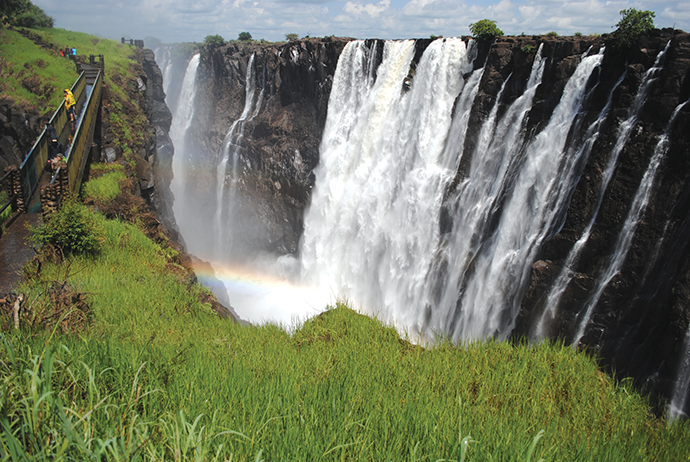 The reserve was closed for about 30 years, until in the 1980s and 1990s, When both self-drive and organised tours were allowed in, albeit in small, tightly controlled numbers.

Shortly after entering the reserve, we saw elephant dung and made a joke about it as we had never seen any elephants in the CKGR. Later we read about five elephants that were seen as far south as Piper Pan, which meant that the elephants had travelled through a section of the park that is normally very dry, and upon reaching Piper Pan, they quenched their thirst by drinking all the water in the waterhole. During our visit to Khutze in March 2013, we spoke to the rangers about this and they confirmed that elephants migrate during the rainy season from the north and have been seen several times in the CKGR. A sighting of elephant in the CKGR was a first for us and I will never again be surprised when I see a heap of dung here in December or any other time of the year.

That night we stayed in Kori 3 Campsite at Matswere Camp, which is beautiful and overlooks Deception Valley, one of the highlights of the park mainly due to the dense concentrations of herbivores its sweet grasses attract during and after the rainy season (and of course the accompanying predators). When we were here in March 2008, we had an encounter with a leopard that visited our campsite and were hoping that it would pay us a visit again - but didn't really hold out much hope. I had gone to bed, leaving the men sitting around the fire, when I heard Xen say that there was a leopard in the campsite. Within seconds, Kori 3 looked like Times Square in New York, with all the headlamps, spot lamps and security torches being switched on. All three men were focusing intently on the rear end of a leopard, as it moved into the surrounding bush. We own an infra-red camera, which we had strapped to a nearby tree earlier, to record any movement around the camp. Upon checking the camera, we observed, from the built-in timer, that the leopard had been around us for more than 20 minutes and the closest tracks were no more than 6 m away from where we were sitting - awesome, but also very nerve wracking. However, that was not to be the last of our experiences.

We spent the next three days exploring the game reserve and by then most of the water had subsided, the sky was clear and we welcomed the warm sunshine back. But it was time to leave. Our time here had been magical and we'd seen a myriad of animals and birds. As we made our way out of the reserve, we decided to camp at the Matswere 8 Campsite, which is situated in the middle of a pan and only has few trees. In fact, the trees were the only indication that the campsite existed, which meant that there were no ablutions or showers. While discussing whether to stay or drive straight home, we came around the trees and saw a young lion and lioness mating. This was the third time we'd stayed with mating lions, so we knew they were not dangerous, unless threatened. We set up camp about 40 m away from them, made sure we had enough firewood and prepared our meal before it got dark. Their mating routine was so predictable that I could bake bread without checking the clock. It was amazing to see how the lioness would lie on her back immediately after they mated and the male would fall into a deep sleep for the next 20minutes. How he knew when she was ready and how he didn’t leave a scratch when he placed his mouth over her neck to keep her down while mating, remains a mystery. Even from where we were, we could hear them purring, happy and content with each other.

As the sun began to set, we had the fire going nicely and were enjoying our time alone with the mating lions - or so we thought. Well, the next moment we nearly fell off our chairs when we heard a roar from behind us, to which the male lion in front of us responded with another huge roar. We were in the middle of a symphony created by two lions; the one protecting his companion and the other one in search of a lioness to mate with. So we jumped up, grabbed the spotlight and saw two very big male lions about 400 m away from where we camped. Although we enjoyed the sounds of the night for the next few hours, every time the lions communicated with each other we nearly had a heart attack. When we realised that the sounds were getting closer and closer, we decided to head for the safety of our roof-top tents. The last of the roars that night were very close and we estimated that the visiting lions were only 100m away.

What an amazing experience our time with the lions had been and what a perfect way to end an amazing holiday. In that time, we totally forgot about how the rain made us feel miserable at times and we forgot about the disappointment of the boat trip across the Chobe River, but we were thankful to return home with so many memorable experiences to treasure and share.