On 18 June 2013, 62 crews will depart from Cape Town on a ‘pilgrimage’ and travel in a circular 8,000 kM route for 18 days through southern Africa. This ‘pilgrimage’, known as the Put Foot Rally, will end on 5 July 2013 in Mozambique and sees competitors taking on the best that Namibia, Zambia, Malawi and Mozambique’s terrains have to offer. In the run-up to and during the rally, participating teams collect donations that will be used to gift brand new school shoes to needy children from South Africa, primarily, and Zambia. 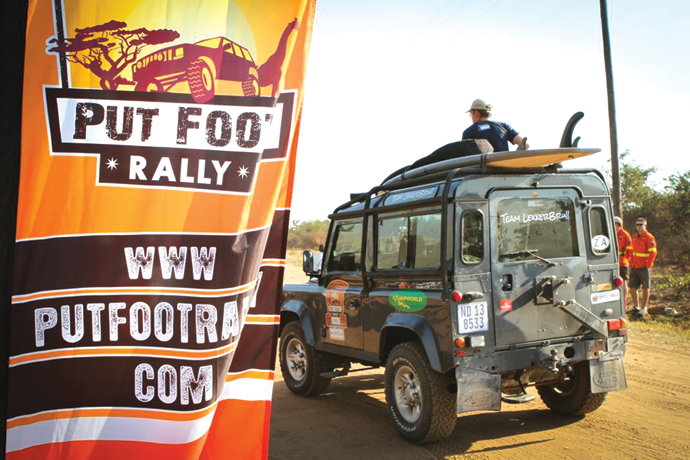 Since its inaugural 2011 launch, the Put Foot Rally has become THE social adventure in Africa and testament to this is the fact that the tickets for the 2013 rally sold out faster than a group of dung beetles can clear a pile of elephant dung! Held annually, this non-competitive rally is the brainchild of three ordinary, big-dreaming and passionate young South Africans; Daryn Hillhouse, Mike Sharman and Dan Nash.

The Put Foot Rally is an adventure of epic proportions. The crews are provided with checkpoints and required to arrive at the checkpoints on certain dates. They may choose any route to follow, provided they arrive at the checkpoint on the specified date. Checkpoints for the 2013 rally will be at Etosha National Park in Namibia, the Victoria Falls in Zambia, Lake Malawi in Malawi and will finish at Inhambane in Mozambique. The checkpoints will host the famous Put Foot parties, demonstrating that doing good doesn't always have to be accompanied with moaning and groaning - you can have fun doing it too!

The Put Foot Foundation was born out of the need to tackle the daily plight and indignity of children who go to school with no shoes. The foundation’s mission is: ‘Giving young, under-privileged children Hope, Pride, and Dignity’. It acts as an umbrella organisation for the Put Foot Rally when teaming up with other charities and assumes responsibility for the administration, planning and delivery of social development projects. It is also responsible for the accounting, collection and distribution of donations.

Wachizungu, a social club of like-minded, positive South Africans involved in a number of social upliftment initiatives, has also entered a crew in this year’s rally. The word ‘wachizungu’ has a particular historical meaning in Africa and dates back to the 18th century. ‘Wachizungu’ literally means ‘things of the aimless wanderers’ and comes from a southern, central and eastern African term for a person of foreign descent. The term was first used in east Africa to describe European explorers, apparently as a result of their propensity to get lost in their wanderings in Africa. It is preferred because central and east Africa people do not link people of European origin to the ‘white’ colour. This is because the concept of colour coding ethnicities is not a part of their culture.

Says Johann van Loggerenberg, a crew member, "As white Africans, we considered this name perfect for our crew. We happen to have ancestors that hail from Europe, but we consider ourselves African in totality because although our ancestors may have been wandering around ‘aimlessly’, we do not have to because Africa is our home. We also like the name because it is an African word, with an African connotation, and does not refer to the colour of our skins. What we hope to do here is not to be mere spectators or tourists in Africa, but behave African."

The Wachizungu Put Foot Rally 2013 crew supports the rally's official cause, the Put Foot Foundation, and as a secondary cause, the Vincent Tshabalala Education Trust, and members have been feverishly collecting donations from far and wide since gaining entrance to the rally. Since November 2012, after launching their website, it has had more than 51,000 views, and they have more than 2,000 friends on their Facebook page and Twitter account. With donations of over R800000 collected by them (more than any previous rally has collected collectively to date), from as far as Kazakhstan, Luxembourg, Ireland, United Kingdom and Tasmania, they hope to collect much more before the rally kicks off. Wachizungu has the privilege of being associated with the generosity of proudly South African companies that are not only supporting their causes but are also assisting the crew with sponsorships.

Crews are required to be self-supportive and have to arrange their own accommodation and sustenance at their own cost. So you'll find some crews opting for the more luxurious options of B&Bs, lodges and the like, whereas others will rough it and camp along the way. Travelling these distances through the various countries will afford the crews many wonderful opportunities to meet the local people, be introduced to their local customs and traditions and generally meet people they would not normally have met.

The Wachizungu crew will be tackling the rally in their trusty old Land Rover Defender, with sufficient time in-between checkpoints to explore parts of the countries on the route, while mostly camping and living it rough!

Says Kim, another crew member and chemical engineer involved in the eco-solutions industry, “There is no better way to make new friends and sell South Africa than to travel through Africa with a cause. Ubuntu is, after all, one of the oldest cultural phenomenons in Africa. As Madiba put it, “I need you in order to be me. And you need me in order to be you.”

The Put Foot Foundation recently reported that R20 000 is sufficient to buy new shoes for 200 children, which would represent about half of an average school they visit during their shoe drops. The shoe drops occur annually after the rally has concluded and collected sufficient funding for this purpose. During February 2013, the Put Foot Foundation did their annual ‘shoe drive’ through South Africa and more than 4,000 shoes were given to pupils at various schools. Wachizungu participated in the shoe drop in Alexandra Township, where almost 1,000 children received brand new leather school shoes.