Laura and I decided that with all our wondrous adventures and amazing stories, it is a shame that not more of them share the majesty of our homeland. When we are travelling the world and meeting people of all nationalities, one of the best things to do is get each person to recommend their top three places for a holiday. That way there is always an ever-increasing list of amazing placing in the world to explore. We inevitably name South Africa as one, so I thought this would be a good time to share with you why this little piece of land at the bottom of the dark continent is so superb. 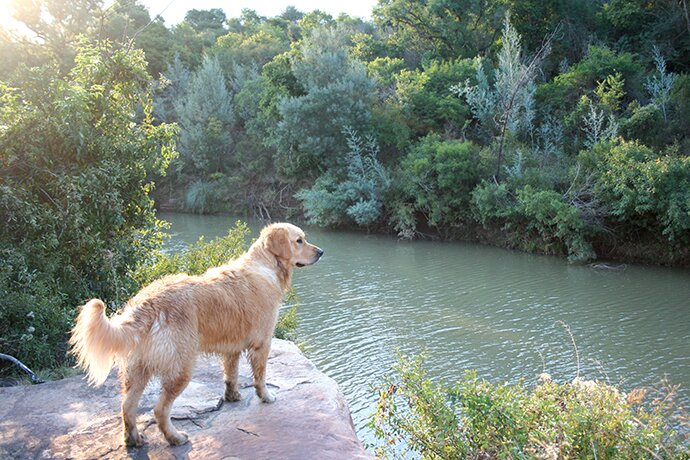 We recently decided to get out of the hustle and bustle of the city and make some space for another adventure, but this time we wanted to go all-out adventure, with a bit of luxury thrown in. Oh, and we wanted our dogs to join us.

What we found was the most wonderful 2,500 hectares of private nature just three-and-a-half hours from Johannesburg. We arrived at the Komati Gorge Lodge midafternoon and were instantly happy with our choice of adventure location. The rolling hills sunk steeply into a picturesque valley of red cliffs, green grass, and sparkling river. The only ones happier than us were our two dogs, Bailey and Milo, whose boundless energy was released into an explosion of exploration the second they bounded from the car. We had chosen to stay in a two-sleeper, self-catering cabin, which was pure luxury with its log fire, fluffy blankets, and sunken spa tub.

But luxury was for the evenings and we were there for the adventure. The real trick was where to start? The dogs had decided that fishing was a good place and were chasing the jumping trout in the trout dam right outside the cottage. Not being avid fishermen, Laura and I started off with a gentle stroll to see where the hiking and mountain bike trails started, where the rock climbing routes were bolted, where the kayaking was, and where the horse riding and other trout dams were. Our stroll took us down the river to two more spectacular trout dams and past a field of horses in great condition. One of the dams had some kayaks on the bank so we decided to go for a paddle. The dogs decided that the swaying motion of the kayak was too much to bear and promptly leapt into the water, with the excitement of puppies. Quickly enough, the autumn evening began to cool off and we headed back to a warm fire and glass of red wine.

The next morning was perfect, with crisp cool air and a clear blue sky. We set off early on what we expected to be a four-hour hike. The route took us up onto the gorge plateau, dropped us back into the gorge, past a beautiful hidden waterfall, then back along the river before crossing up onto the opposite bank and up onto a hilltop overlooking the river and lodge. We then snaked down the cliff side and ended at the trout dams where the dogs could cool off. The hike was excellent - not too challenging, yet interesting walking, with beautiful mountain views and forest trails. Finishing a well-earned lunch and glass of crisp rosé, we decided our hounds had the right idea and settled on the green lawn for a nap in the sun.

Waking before Laura, I donned my cycling kit and headed off for a short mountain bike ride. The trail was excellent, parts were very technical as I think I was on more of a hiking trail than a cycling trail, but I had mountains of fun none the less. I was lucky enough to see a lone gemsbok and a herd of eland while slogging along the mountain trails; such special animals to share this space with. Getting back to the lodge, I picked up the dogs and raced them, on my bike, down to the trout dams and back - they were in their element, and so was I. 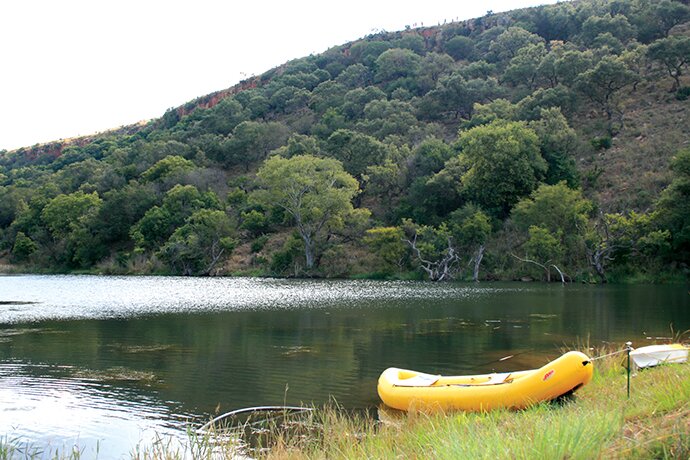 The next morning was another perfect African daybreak, with a soft, pink sun glinting over the horizon and dew-covered grass sparkling in the day's first light. After a warm mug of tea and an Ouma rusk, we set off for the red cliffs of Komati to test our rusty climbing skills. There are four bolted routes of about 15 to 20 m in height and only about a kilometre from the lodge. We started on what I would guess is a grade 16 climb and it was a beauty (although a little dusty from non-use). We moved on to the next climb, which was probably a grade 18 (or maybe my climbing fitness had just deserted me), but once again a seriously pleasant climb. By this stage our arms were pumped and the dogs had disappeared to explore the mountainside, so we decided to head back for something warm to drink and a relaxing brunch. The rest of the day was spent relaxing and strolling along the river paths, finally ending with a full body massage at the spa and another cosy log fire with some Old Brown Sherry.

Unfortunately it was raining and a bit miserable on our final day, so we slept in - I am not sure if we enjoyed it more or the dogs curled up on the fluffy rugs. With the morning wiling away, we packed the car and headed for home, ending a magic weekend of adventure and relaxation, with definite plans for a return trip in the very near future - what a wonderful Africa.

• Komati Gorge is an ideal adventure location that offers hiking, mountain biking, rafting, quad biking, fly fishing, rock climbing, kayaking, bird watching, and horse riding.
• The Lodge has self-catering units for parties of various sizes, as well as inclusive hotel rooms, a restaurant and spa.
• It is located about 3.5 hours from Johannesburg, between Carolina and Machadodorp.
• For more information visit www.komatigorge.co.za