Zimbabwe is home to many incredible national parks, natural sites and attractions, and as Xen and I hadn't been there for a number of years, we decided to go for a 25-day, tour through Zimbabwe as well as Botswana and Zambia,with Xen's two brothers. Travelling by 4x4, our mission was to visit the Hwange, Chizarira, Matusadona and Mana Pools Game Reserves before heading for Zambia. 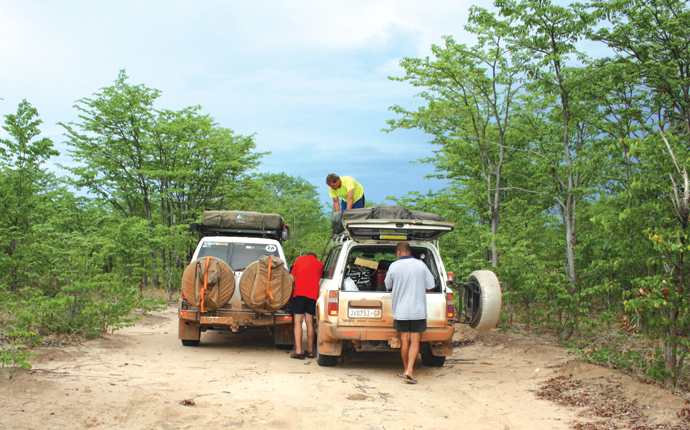 Most people prefer to travel to Hwange National Park, in Zimbabwe, via Bulawayo and then head north along the A8 to Mana Pools. Another route would be via Harare and then north on the A1 towards Chirundu. We decided to enter Zimbabwe through the Pandamatenga border post on the Botswana border. Being the rainy season and close to sunset, we saw a lot of animals, including a few shy sables, and then spent the night at Robin’s Camp, in Hwange Game Reserve.

The next morning we followed the Tshowe route and to our utter amazement saw two cheetahs in the middle of the day. Other than this rare sighting and a few buffalo, we didn’t see any other animals in this part of the reserve, which is known to have prides of lion and hyena. That night, we camped at the Deteema Campsite, which was a bit disappointing due to the lack of trees, but a cool lapa overlooking a waterhole soon had us forgetting about our troubles. During the night, a young hyena sneaked into our camp and chewed our wheel bag and it was only when it started to pull at the bag that we woke up and chased it away.

Rising early, we planned to visit the Little Toms game-viewing area, but heavy rainfall in the area and some advice from a ranger about the presence of cotton soil, which would make the recovery of the vehicles problematic, had us travelling further north to Chingahobe Dam. It was a lovely drive until one of the vehicles in our group got stuck in the thick cotton soil and we ended up having to winch it out of trouble. From there, we made our way to our next overnight stop. Besides the ‘green water’ in the shower, Mandavu Dam Camp is beautiful and overlooks the Mandavu Dam, which is full of hippos and crocs. It is also a bird lover’s paradise and where you will see fish eagles, herons and egrets, to name but a few.

As we were about to leave the next morning, two rangers entered the camp carrying a tent, food, clothes and AK47s. Their task was to patrol the veld for poachers and return to the camp after a week. Although they were terribly thin, their smiles radiated just how proud they were to be protecting the area around Mandavu Dam. Bidding them farewell, we took the Dombashura Loop to Sinamatella, but after encountering one dead end after another, eroded roads and washed away bridges, we had to back track and ended up taking another route to Shumba Picnic Site. The scene that greeted us here was a sad and gruesome one - and one that I hope to never witness again. Around the waterholes lay the carcasses of about 15 elephants.

The rangers informed us that a drought had ravaged the area earlier in the year and the elephants, having walked a long way to reach the waterholes and their only hope of survival, had drunk too much water, causing them to collapse and die.

Besides millions of horse flies and the most tawny eagles I've ever seen, the game viewing was disappointing. However, the road between the main camp and Ngweshla Picnic Site more than made up for it, as we saw a honey badger teasing a buffalo, knob-billed ducks, elephants and many other animals. Ngweshla turned out to be a wonderful surprise and is a must for anyone travelling to Hwange. At the campsite, which overlooks a waterhole, we settled down to enjoy the antics of blue wildebeest, kudu, lots of young animals and a huge variety of birds, such as kites, marabou storks and tawny eagles, as they congregated at the water’s edge. Besides hearing an argument between two groups of lions that night, we unfortunately didn’t see any of the cats.

After spending seven wonderful days in Hwange, we set out for Binga, the passing landscape made all the more interesting by the colourful traditional huts that lined the road. Binga was once a bustling harbor town and we'd heard only good things about it, so we decided to take a look. Maybe it was the pouring rain or the fact that we couldn’t wait to get to Chizarira National Park, but besides a few houses and crocodile farm, Binga didn’t impress us. So we refuelled and set off in search of the ‘hidden gorges’ in the Sendwa area, which we'd heard about from a fellow traveller.

The dirt track to Chizarira National Park took us through many villages and was in such a terrible state that it should only be attempted with a good 4x4. But this was not the worst of it and once in the park, the road deteriorated even further. However, it was breathtakingly beautiful. We camped at the Muncheni Look Out, which overlooks the most picturesque gorges. The camp is very basic and has no electricity or water. The long drop is a definite no-go area and I'm sure the shower is only used by very desperate or brave travellers. We unanimously agreed that it would be much safer to shower under a tree using our own bucket system. The overall experience at this campsite was fantastic due to the location and view of the valleys below, however one needs to be aware that the facilities are not desirable due to the lack of maintenance and presence of creepy crawlies.

Back on the road, we made our way to Matusadona National Park. Although this road is terrible, the area is green and lush and I enjoyed every moment travelling there. En route, we stopped in Siabuwa, a small traditional village 40 km east of Kariba Dam, and were surprised to see small solar panels gracing the roof tops of their dwellings, which provided electricity for lights in their homes. You could see that life in the village was hard and nothing goes to waste, as was seen when a young girl tried to shield herself from the harsh midday sun with her home-made umbrella made of a used apple tray, precariously balanced on top of a wire! Our short time here had been fascinating, but it was time to move on.

Once we entered Matusadona National Park, situated on the southern shores of Lake Kariba, it took us nearly three hours to travel the 35 km to Tashinga Campsite, on the lake's shore. Matusadona is an Intensive Protection Zone (IPZ) and home to several relocated rhinoceros. It comprises some 1,400 square kilometres of diverse flora and fauna, and was proclaimed a non-hunting area on 7 November 1958 before Kariba Dam was built. With the lake came ecological changes and the lake shore has contributed greatly to the increase of large mammal populations in the area, especially elephant and buffalo.

Rising early the following morning, we found lion tracks close to our campsite, our first sign of lion on our trip so far. The Rhino Loop was amazing and we saw many birds and animals scattered across the plains. But halfway round, the power steering on one of the vehicles packed in, so Xen contacted Hennie at Honeydew Toyota, by satellite phone, who recommended that we don't drive any further and find gearbox oil. Xen and I offered to return to camp, to try and source some gearbox oil, and what was supposed to be a short trip turned out to be an arduous three-hour trip due to very poor road conditions. By the time we finally managed to find some gearbox oil and return to the broken-down vehicle, it was dusk and the sky had turned grey, illuminating the brilliant green trees and shimmering white sand. Once the vehicle was repaired (it turned out to be a loose clamp) we headed back to camp and were reward when we saw a beautiful lioness. We spent some time taking photos and admiring her, and soon the struggles of the day were forgotten.

Our next destination was Mana Pools National Park and to get there we took the A1, stopping only in the small town of Karoi to stock up and refuel. This unique park is a UNESCO Natural World Heritage Site, based on its wildness and beauty, together with a wide range of large mammals, over 350 bird species and aquatic wildlife. It is also one of Zimbabwe's most popular parks and it was easy to see why. Entering the gate, we were welcomed by the most majestic baobab trees and the 77 km to Nyamepi Camp went quickly, as we passed a variety of animals, birds and the cherry was a sighting of some shy nyalas. For the next two days we relaxed, were entertained by the monkeys and baboons and watched the rain falling like curtains in the lower Zambezi River. At night, we heard the deep-throated roars of lions and saw a spotted hyena close to the camp. The full moon reflecting on the river and the changing colours of the landscape were incredible and no photo could do it justice. Our time in the park had been truly memorable and I would highly recommend adding it to your bucket list.

The next morning we packed up in pouring rain. When we reached one of the low water bridges, we had to wait for about an hour before we could cross. But the highlight was when we reached the Rukomeshi River Bridge. When we came over this bridge three days earlier, there was only a dry river bed. In one night, the river had swelled and now coursed barely a metre below the bridge. The banks were overflowing and tree stumps raced along in the brown, tumbling water, as if they were feathers. We stood amazed at the power of the water and even the locals, who had been visiting the area for years, said they'd never seen anything like this.

We exited Zimbabwe at Kariba Dam, but that's a story for another day.

• Remain patient and friendly at the border posts - it can be a long process.
• Be aware of the operating times at the Pandamatenga border post, as the border gate closes at 17h00.
• Have all your documents on hand for police checkpoints because there are many.
• Ensure you have red (rear) and white (front) reflectors on your vehicle.
• A fire extinguisher and emergency triangles are compulsory.
• Take spare gearbox oil, steering oil, engine oil and brake fluid.
• Always ensure you have enough fuel to get you to the next large town, so fill up wherever possible.