The Lesotho Wildrun is a pure mountain-running journey through the magnificent, remote and wild mountain kingdom of Lesotho. This three-day, 120 km mountain wilderness experience traverses the Ketane Ha Mothibi and Thaba Putsoa ranges, roughly 60 km south east from the capital of Maseru. The unrivalled magnificence of this majestic kingdom promises participants trail running like none they’ve experienced before. 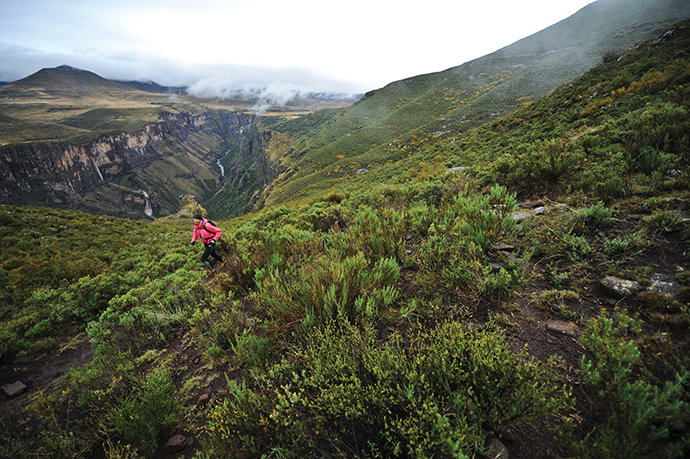 This year’s Lesotho Wildrun took place from 18 to 20 April 2013, and started near the mountain-frontier village of Malealea. Entries for this unique experience were limited to 50 runners, to allow runners to experience long stretches of serene solitude through the extensive network of trails that cross the mountain ranges and valleys, from village to village in Lesotho - an area only accessible on foot.

The weather forecast for the three days of remote mountain running looked pretty grim as the Wildrunner team left Cape Town, with a massive cold front pushing through to reach Lesotho on the evening proceeding the start day. The minimum temperature forecast for Semongkong was only 8°C! True to the forecast, the first rains arrived on Wednesday evening at just about the same time as the runners congregated at Malealea for their event briefing and welcome dinner.

The rain continued to fall unabated the next morning, breaking only for the start shortly after 7 a.m. Later that morning, the sunken clouds began to break apart and open up the views across the magnificent Ketane Plateau, which had a light dusting of snow on the higher peaks.

Day 1 was a 43 km linear route that took runners almost due east from Ha Searle to Semonkong, passing the remote mountain villages of Ha Poriki and Ha Hlalele. One of the most spectacular sections of the day’s route comes after the checkpoint and Hammer Fuel Station, at around the 26 km mark, where runners cross the Ketane River, then climb and traverse the slopes just behind the massive 162 m Ketane Falls and sheers cliffs of the downstream gorge.

Due to the constant onslaught of rain, the going was tough as the ground was soft and slippery underfoot. The 2,000 m plus altitude gain had also begun to take its toll on the runners, and the combination of cold weather and a slower speed meant that some of the participants found themselves a bit short on gear to keep themselves warm. Some even pulled into the tiny village of Ha Poriki and holed up in a hut for a few hours to try and warm up!

After a long, tough and muddy day, it was Jacques Mouton who forged ahead of the chasing pack to finish the day in 7:10:09, with Stephen Kriel and Sean Doherty in joint second place and Andy Stewart just a minute back in third.
Linda Doke made her intentions clear from early in the Ladies race to win and take second overall in 7:20:11. Tracey Almirall was just 13minutes behind, placing second in the Ladies race and fourth overall. Robin McDonald was the last runner in that evening before the cut-off in 11:45:28.

Day 2 of the race saw runners tackle a fantastic 28 km circular route that traversed both the eastern and western edges of the magnificent Maletsunyane Gorge. The cherry on the cake was being treated to what is arguably one of the most breathtaking waterfall scenes in southern Africa - the 192 m high Maletsunyane Falls. This was certainly a highlight of the event and offered the runners, fast or slow, a chance to take a break and immerse themselves in these truly mind-blowing surroundings.

Straight out of the blocks, the runners found themselves clambering over some big boulders along the Maletsunyane River valley upstream from the falls, followed immediately by a winding trail along the riverbanks. The route wound its way to the edge of the eastern side of the Maletsunyane Gorge and offered sudden and unexpected views into this 500 m deep chasm. As a result of the rain, other smaller - but no less unimpressive - waterfalls cascaded over the edges of the gorge to plummet into the Maletsunyane River below.

The route then descended to the bottom of the gorge, where runners crossed the Maletsunyane River, at the 16 km mark, before facing the biggest climb of the day, a mammoth 3 km climb with 700m of vertical height gain, to the western rim of Maletsunyane Gorge.

Then, as the runners reached the top of a hill at the 24 km mark, they were greeted with one of the most spectacular views of the waterfall you could ever wish for. Magically, it’s also a view that can only be seen from one direction. Nothing can quite prepare you for this visual feast; the gorge is so wide that it can’t be contained in a single image, so the impact is just out of this world. In front of you, water thunders off a 192 m single drop to the gorge floor below. From the viewpoint, the drop is vertical and all around you are scenes of rock spires and other smaller waterfalls. Pure magic that has to be seen to be believed, and for the rest of the day, these beautiful images remained in the runners' minds. To top off the magic, the surrounding peaks had a dusting of snow that became visible when the clouds opened up from time to time, to reveal a landscape straight out of a fairy tale.

The short run back to Semonkong Lodge was hardly noticeable as the mind was still reeling from the impact of the fantastic vistas witnessed throughout the day. Later, everyone congregated around a log fire, sipping cold Maluti beers and shooting the breeze with fellow Wildrunners; it had been a truly memorable day.

After a disastrous first day, Tim Ellerbeck stuck with front-runner Jacques Mouton. The duo was joined by Andy Stewart for most of the 28 km, but somewhere in the last few kilometres, Andy dropped back slightly to finish less than a minute behind in third, with Tim Ellerbeck and Jacques Mounton in first, in a little over 4:18. Linda Doke once again took the lead in the Ladies race to take her second win and place fourth overall in 4:33:46. Tracey Almirall placed second and fifth overall in 4:47:03, running in with Stephen Kriel and Sean Doherty. 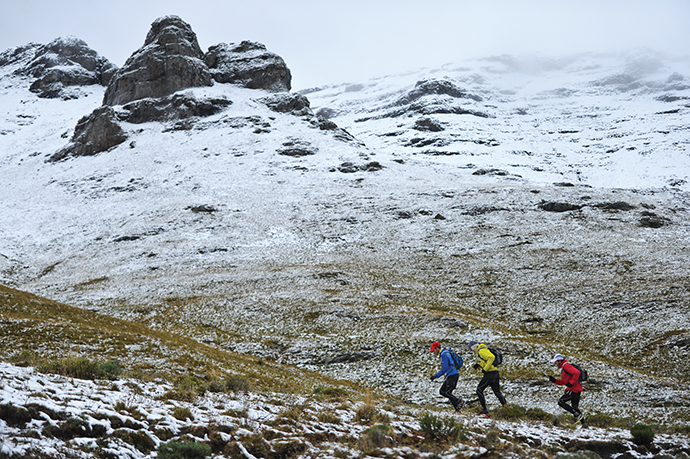 Day 3 - 40 km from Semonkong to Ramabanta

The final day arrived and tired bodies appeared from warm rooms, to step into another brisk Lesotho day, with temperatures hovering around the 8°C mark. Retracing their steps along the last kilometre of Day 1, runners then wound their way out of Semonkong before heading north west upstream and along the Maletsunyane River. The first half of the route made its way on an ancient footpath to the top of the infamous Baboon’s Pass. This is one of the most scenic sections of the three days, with the trail traversing along the slopes of narrow river valleys that are rimmed with limestone cliffs.

Freshly fallen snow greeted runners as they climbed the final 100 m up Baboon’s Pass. The high peaks of Thaba Putsoa to the north east lying thick with snow. The last 20 km wound down Baboon’s Pass to the Makhaleng River valley far below - a descent of more than 1,700m. This was one of the easier sections and a welcome relief to the tiring runners. The final river crossing presented itself in the form of a 50 m rocky stagger across the frigid Makhaleng River - this year being a little fuller than normal and requiring a support rope to be put in place!

Immediately after the river, there was a final ramp up 600 m to the finish line on the lush lawns of Ramabanta Trading Post Lodge - a fitting end to three awesome and unimaginable days of pure trail running.

Tim Ellerbeck smashed the second half of the day to finish in 5:17:07, clocking up a lead of almost 20 minutes on second placed Andy Stewart. Jacques Mouton came third, but he had already done enough to secure overall victory and the 2013 Lesotho Wildrun title in a total time of 17:09:11.

In the end, only 30 brave, hardened runners completed this pure and magnificent journey through the mountains of Lesotho and received the prized Royal Quality Basotho finisher’s blanket, complete with the 2013 Lesotho Wildrun logo embroidered in one corner.

The 2013 Lesotho Wildrun was proudly sponsored by First Ascent, who provided world-class gear for the runners; aQuelle provided bottled water throughout the event; and Hammer Nutrition provided endurance fuel at the checkpoints and for the runners' goodie bags.

Entries for the 2014 edition of the Lesotho Wildrun will open on 26 September 2013. For more information on this and other events, visit www.wildrunner.co.za